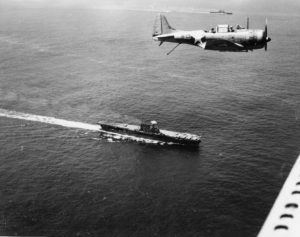 A U.S. Navy Douglas SBD-3 Dauntless flies over the aircraft carriers USS Enterprise (CV-6), foreground, and USS Saratoga (CV-3) near Guadalcanal on 19 December 1942. The aircraft is likely on anti-submarine patrol. Saratoga is trailed by her plane guard destroyer. Another flight of three aircraft is visible near the Saratoga. The radar array on the Enterprise has been obscured by a wartime censor.