During World War II, two parachute infantry regiments, the 504th and 505th, and one glider infantry regiment, the 325th, comprised the 82nd Airborne Division. Paratroopers considered themselves elite soldiers who entered battle through the courageous act of jumping from aircraft. They considered themselves a cut above the men of the glider regiment, comprised of “straight leg” infantry who wore leggings instead of jump boots and did not blouse their trousers. Ironically, it was a glider man, Charles N. DeGlopper, who committed the Division’s most conspicuous act of valor in Normandy, where the 82nd confirmed its reputation as America’s Guard of Honor.

On 9 June 1944, 3 days after the Allied invasion of Europe began at Normandy, the 82nd Airborne Division sought to secure a bridgehead over the La Fiere Causeway, in the vicinity of the French village of Cauquigny. By controlling the causeway, the 82nd could prevent German counterattacks across the flooded Merderet River towards the American beachhead at Utah Beach. Elements of the 505th Parachute Infantry Regiment seized the La Fiere bridge on the eastern side of the causeway on 6 June, while German forces massed in Cauquigny on the western side of the Merderet.

Additional American forces from the 507th and 508th Parachute Infantry Regiments, attached to the 82nd for the invasion and scattered on both sides of the river, continued to try and mass sufficient combat power to overwhelm the Germans holding the western side of the causeway. By the evening of 8 June, the Division, reinforced on 7 June by the 325th Glider Infantry Regiment, turned its full attention to forcing the Merderet River[1]

Elements of the 507th discovered a shallow crossing of the river north of Cauquigny and communicated this intelligence to the Division Commander, Major General Matthew B. Ridgway, who ordered the 325th Glider commander, Harry G. Lewis, to use this crossing site to move a battalion across the river in an attempt to flank the village from the north. Colonel Lewis gave the mission to his first battalion under the command of Major Teddy Sanford. Sanford led his force across the river and linked up with troopers from Charles Timmes’ 2/507th PIR to attack the German positions. Sanford’s 1/325th GIR led the attack. 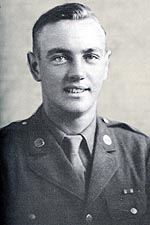 B Company, 1-325th attacked south as the main effort on the early morning of 9 June, supported by A Company, with C Company securing the battalion’s rear against German positions to the northeast. By 0330, C Company moved south to link up with the bulk of the battalion. Due to the pressure of German counterattacks from the northeast and general confusion during a night attack, C Company blundered into a German artillery battery.

Initially believing the Germans wished to surrender, the American glider man did not act, until they suddenly found themselves receiving fire from both flanks. The company withdrew north out of the village, with the exception of one platoon that found itself outflanked and unable to maneuver. The troops sought what cover they could in low ground by the road out of Cauquigny.[2]

As German infantry moved closer to their positions, Private Charles N. DeGlopper, armed with a Browning Automatic Rifle (BAR), volunteered to lay down a base of fire in order to provide cover for his platoon mates to make their escape. He left the shelter of the platoon position, fully exposed to the attackers, and took a position in the middle of the road. According to reports DeGlopper “sprayed the hostile positions with assault fire. He was wounded, but he continued firing. Struck again, he started to fall; and yet his grim determination and valiant fighting spirit could not be broken. Kneeling in the roadway, weakened by his grievous wounds, he leveled his heavy weapon against the enemy and fired burst after burst until killed outright.”[3] 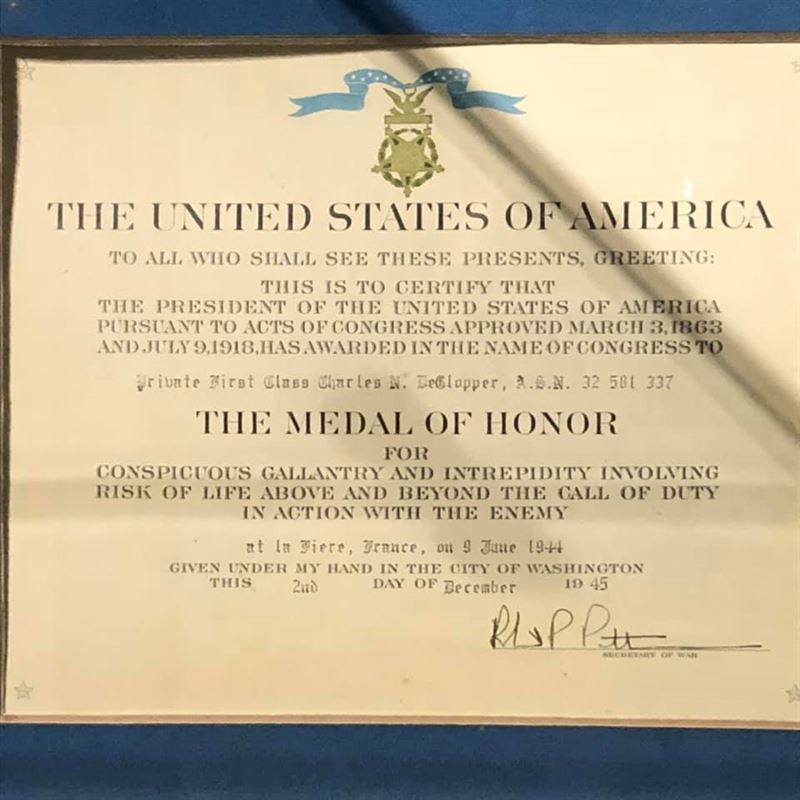 DeGlopper MoH Citation (author photo)DeGlopper’s act of valor allowed his platoon to withdraw and establish a more defensible position, which became the first American bridgehead on the western end of the La Fiere Causeway. The remainder of the 325th GIR, along with the 505th PIR and elements of the 507th and 508th attacked across the causeway later in the day on 9 June and succeeded in expanding and holding the bridgehead until elements of the American 90th Infantry Division arrived and supported them in securing the bridgehead on 10 June 1944. This action secured Utah Beach and set conditions for follow-on American forces to attack towards German positions on the Cotentin Peninsula.

General Ridgway later called the taking of Cauquigny “the hottest single incident I experienced in all my combat service.” Charles N. DeGlopper stepped up to protect his comrades under such conditions and proved beyond any doubt by his actions that the glider men of the 325th were equals as combat soldiers to the paratroopers of the 82nd Airborne Division.[4]