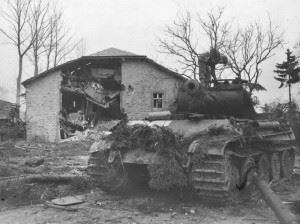 On Christmas Eve 1944, the 2nd SS Panzer Division Das Reich swept through Manhay and into Grandmenil, pushing aside US Task Force Kane from the 3rd Armoured Division. However, after being pummeled by air strikes on 26 December, the town was assaulted by Task Force McGeorge of the 3rd Armoured Division and taken in the early-morning hours of the 27 by the paratroopers of the 517th Parachute Infantry. This was one of the “Das Reich” Panthers lost in the fighting. It is being inspected by a GI from the 3rd Company, 289 Infantry, 75th Division, which occupied the town on 30 December.