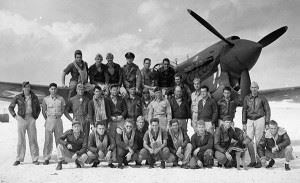 United States Army Air Forces (USAAF) 78th Fighter Squadron, stationed at Midway from January 23 until April 21, 1943 to protect the island, its garrison and fortifications and the submarine and communications base from enemy attacks. Lt. Ray Obenshain is the third from the right in the second row from the bottom. (Credits: Mark Stevens, 7th Fighter Command Association)