After the defeat at Stalingrad in January 1943, the German Army’s front lines were slowly smashed to pieces by the growing might of the Soviet Army. Yet these soldiers continued to fight gallantly. Even after the failed battle of the Kursk in the summer of 1943, and then a year later when the Russians launched their mighty summer offensive, code names Operation BAGRATION, the German Army continued to fight on, withdrawing under constant enemy ground and air bombardments.

As the final months of retreat were played out on the Eastern Front in early 1945, it depicts how the once vaunted German Army, with diminishing resources, withdrew back across the Polish/German frontier to Berlin itself.

REVIEW of Images of War: German Army on the Eastern Front – The Retreat 1943 – 1945 (Rare Photographs from Wartime Archives) by Ian Baxter

This is our third review on a book from the Images of War series by Ian Baxter (Our first was REVIEW: Nazi Concentration Camp Commandants 1933­-1945 and second REVIEW: Images of War – Final Days of the Reich by Ian Baxter). Again Ian Baxter did a good job compiling some great, unknown (to me) photographs of the German army however – as in our second review – I’m having problems with Ian’s captions. They are sometimes unreferenced for what is told and, or don’t match what is seen.

Some issues with this book is that there are duplicate photographs published, he could’ve at least checked whether he used the same photograph twice. Secondly, if you name a book ” (..) The Retreat 1943 – 1945 ” and you publish several photographs of the actual advance into the Soviet-Union in 1941 / 42 then I ask myself whether this was compiled rapidly? I also noticed some photographs were already previously published in other Images of War books, so you’ll recon the usage of the same images. 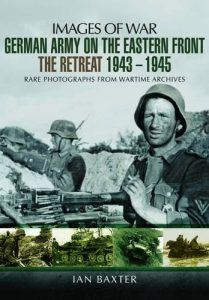 As stated in my other reviews about books mainly featuring photographs: images should be on glossy paper or paper that let the details of photograph come out right or can be scanned to zoom in for research purposes and sadly that is was this book / series misses. It may or may not be a problem to people who just want to use the book to get a look into this period of war however when you are willing to use it for research (either uniform wise, material, identification..) the photographs come just in medium quality especially for a dedicated image book.

Thought for modellers or the people that enjoy photographs or use it as reference for projects, this book (better said series) will keep you enjoyed with new photographs and give you a global image of what occurred during that period of the war. I only hope that Ian Baxter will use better paper in the future for his photographs, caption it better and doesn’t use the same photographs over again otherwise he may loose (regular) readers.

I’m not so hard to score books bad points so I’m still giving Ian the credit of the doubt however if future Images of War books will remain the same as now, he will loose valuable points.

You can purchase the book on Amazon (UK) or Amazon (US)