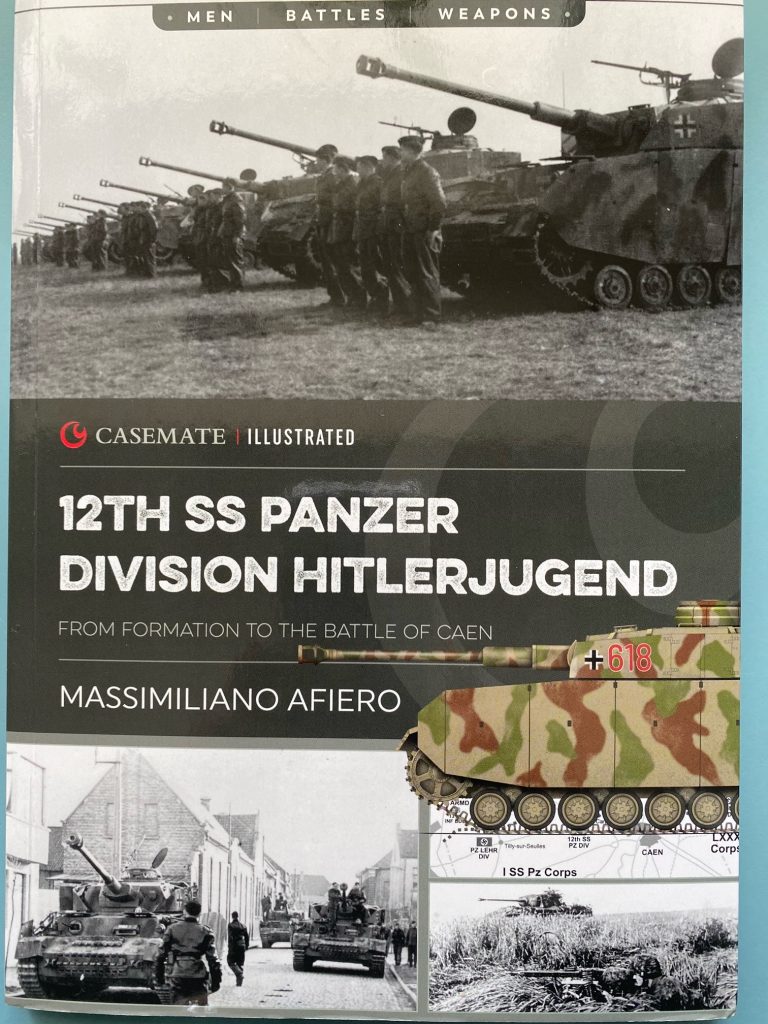 Being there . . . . to help parent German progeny born as late as 1926, and, in 1943, “formed”,
nay drafted, as “Hitlerjugend” for attachment to the 1 SS Panzer Corps and trained as an
emergency response force for the coast of France to repel the Allied invasion certain to come
across the English Channel. Then, as one of the two closest panzer divisions to face the landing
beaches, watch the brave teenagers engage American and British paratroopers at dawn on 6
June 1944. They will try to kill, die in the effort, flee, or be captured in the major defensive
battles. Once the Allied bridgehead is established, follow the Hitlerjugend survivors deploy to
defend Caen in four major fights where they will demonstrate fierce, resolute resistance,
although greatly outnumbered. A modest number will manage to survive the war, thanks to
compassionate top German officers who circumvent orders planned to throw the young men
into suicide missions . . . .
NEW CASEMATE ILLUSTRATED-MILITARY SERIES VOLUME IS PACKED WITH PHOTOGRAPHS,
MAPS AND PROFILES OF HITLER’S DESPERATE MOBILIZATION AND DEPLOYMENT OF BOYS AS
YOUNG AS 12, EVEN 11, TO FIGHT TO THE BITTER END DEFENDING THE THIRD REICH
Many, if not most, of the Hitler Youth who died for the Fuhrer knew little of Hitler’s tyrannical
dictatorship during their short lives. Generally, their fanaticism rivalled that of the most
hardened SS troops, state security forces, and the despised Gestapo. American and British
soldiers hoped to treat the young men as no more overgrown schoolboys. That is, until our own
and Allied men were shot dead. Ruefully, they realized that a rifle, grenade, or submachine gun
was just as lethal in the hands of 15, or 12-year-olds as in those of their fully grown superiors.
The Hitlerjugend who survived World War II in Europe, surrending peacefully on May 3, 1945,
were lucky. Read,
“12 TH SS PANZER DIVISION HITLERJUGEND – Volume 1, From Formation to the Battle of Caen”,
by Massimiliano Afiero, translated by Raphael Riccio. CASEMATE Illustrated Military History:
2022, 8”x10”, 150 photos and maps, 128 pages, sc; $28.95. Visit,
www.casematepublishers.com.
Reviewed and highly recommended by Don DeNevi

“Churchill was worried that a stalemate would set in similar to that of World War I or, more
recently, Anzio . . . . The Germans quickly took advantage of Caen’s destruction by manning
defensive positions within the ruins. British troops were hampered by giant craters and hills of
rubble . . . . The attack by the 43 rd Wessez Division to capture Hill 112 to the southwest of Caen
led to vicious fighting with little territorial gain. Carpiquet had, in fact, been held by only 150
teenagers of the 12 th SS Panzer Division, 100 teens on the airfield, and 50 in the village. Yet
Canadians of the Royal Winnipeg Rifles, with tank and flamethrower support, took the village
only with great difficulty on July 4 th . It was found to have well-built underground blockhouses
connected by passages. By the end of the day, 117 Canadians were dead and 260 wounded.”
See “The World at Arms – The Reader’s Digest Illustrated History of World War II,” Chapter 19,
page 307, “Caen – Crucible of Victory”.

Hitler had ordered that Caen and Carpiquet be defended at all costs. No retreat was
contemplated. Only General Sepp Dietrich and Rommel were allowed to issue withdrawal
notices, which they did despite the Fuhrer’s direct order. When they saw the Hitlerjugend were
in danger of being obliterated, they acted without notifying him. Although there was no
hesitation on the part of the Hitlerjugend to destroy American and Allied boys, it is nonetheless
sad, at least for this reviewer, to gaze upon photos of 15-or-16-year-old artillery gunners lying
with half their heads off in the ditches and dirt lanes of antitank-gun positions. Fortunately,
most of this book’s photos show dazed and wounded Hitlerjugend grenadiers with their hands
up, surrending.
After six weeks of attritional warfare, from the beaches of Normandy to the crumpled walls
of Caen, the Hitlerjugend division was placed in reserve. They had made a desperate effort to
defend the city, with too few resources, too few troops, coupled with poor strategic leadership,
i.e., Hitler’s interference, the British, Canadian, and Polish forces start breaking through the
12 th ’s lines into Caen.
A final point. It should never be forgotten that during their retreat from France, members of
the LSSAH, 1 st SS Panzer Division Leibstandarte SS Adolf Hitler and a select few of the
Hitlerjugend Division murdered 34 French civilians in Tavaux and Plomion, France. Units in the
division that were not fit for combat were ordered to return to Germany on 8 September,
leaving behind a small Kampfgruppe attached to the SS Division das Reich. The division losses
during the fighting in Normandy, in its three months from June to September, amounted to
approximate 8,000 killed, and, destroyed, over 80% of its tanks, 70% of its armored vehicles,
60% of its artillery and 50% of its motor vehicles. No where did this reviewer find in this book,
or his own research, how many Hitlerjugend overall wound up dead serving in the LSSH,
captured, or wounded before the war on ended on 3 May 1945, although that information may
soon be available in author Massimiliano Afiero’s planned, much-needed, much-desired,
second volume of this cogent history.