On 20 December 1989, the “All-American Division”, as part of the United States invasion of Panama, conducted their first combat jump since World War II onto Torrijos International Airport, Panama. The goal of the 1st Brigade task force, which was made up of the 1-504 and 2-504 PIR as well as 4-325 AIR and Company A, 3-505 PIR, and 3-319th AFAR, was to oust Manuel Noriega from power. They were joined on the ground by 3-504 PIR, which was already in Panama. The invasion was initiated with a night combat jump and airfield seizures; the 82nd conducted follow-on combat air assault missions in Panama City and the surrounding areas of the Gatun Locks. The operation continued with an assault of multiple strategic installations, such as the Punta Paitilla Airport in Panama City and a Panamanian Defense Forces (PDF) garrison and airfield at Rio Hato, where Noriega also maintained a residence. The attack on La Comandancia (PDF HQ) touched off several fires, one of which destroyed most of the adjoining and heavily populated El Chorrillo neighborhood in downtown Panama City. The 82d Airborne Division secured several other key objectives such as Madden Dam, El Ranacer Prison, Gatun Locks, Gamboa, and Fort Cimarron. Overall, the operation involved 27,684 U.S. troops and over 300 aircraft, including C-130 Hercules, AC-130 Spectre gunship, OA-37B Dragonfly observation, and attack aircraft, C-141 and C-5 strategic transports, F-117A Nighthawk stealth aircraft, and AH-64 Apache attack helicopters. The invasion of Panama was the first combat deployment for the AH-64, the HMMWV, and the F-117A. In the short six years since the Invasion of Grenada, Operation Just Cause demonstrated how quickly the US Armed Forces could adapt and overcome the mistakes and equipment interoperability issues to conduct a quick and decisive victory. In all, the 82d Airborne Division suffered 6 of the 23 fatalities of the operation. The paratroopers began redeployment to Fort Bragg on 12 January 1990. Operation Just Cause concluded on 31 Jan 1990, just 42 days (D+42) since the invasion started. The following are some stories from personnel involved in the detailed planning and also the execution of the mission.

Tony participated in the spearhead of the invasion of Panama and was awarded the bronze star on his jump wings for his combat jump into Panama as part of Operation Just Cause. Tony Padilla served in A Co, Assault CP 1990-1993. He is currently serving as a LEO in Saint Paul Minnesota.

Major John Kirkbride (Captain at the time of the war) 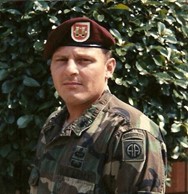 Ed participated in the spearhead of the invasion of Panama and was awarded the bronze star on his jump wings for his combat jump as part of Operation Just Cause.

The careful planning and intensive training directly contributed to the successful execution of the operation. Despite its complexity, the plan represented a clear understanding of immediate military and political goals of rapidly destroying the enemy’s ability to fight without needlessly endangering Panamanian lives or property. The intensive preparation and training allowed troops to quickly adapt to the unforeseen challenges of combat. Major military operations took only five days; Noriega himself surrendered on January 3; and by January 12, Operation Just Cause was over. In less than a month, the U.S. Army and other American Armed Forces had achieved complete success. 3, 4 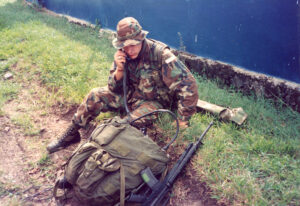 [1] Short for retransmission of military radio signals. Military units at the brigade level and above may need to retransmit LOS radio communications, in order to integrate forward area personnel into the radio net. When performing radio retrans, with devices such as the VHF-FM SINCGARS radio….Each time audio passes through a radio, it becomes slightly distorted. When audio is retransmitted through the SINCGARS, it will pass through 4 radios, by the time it reaches the listener. Taken from https://www.definitions.net/definition/retrans.

[2] After the demise of the best Airborne plan, a most terrifying effect occurs on the battlefield. This effect is known as the rule of the LGOPs. This is, in its purest form, small groups of pissed-off 19 year old American paratroopers. They are well trained. They are armed to the teeth and lack serious adult supervision. They collectively remember the Commander’s intent as “March to the sound of the guns and kill anyone who is not dressed like you” – or something like that. Definition provided by https://www.urbandictionary.com/define.php?term=LGOPS. 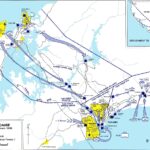