Good news for Europeans who were waiting to have the subtitled version of the Estonian World War II Movie “1944” (in Germany released as Brüder / Feinde). The movie has been released in the United Kingdom (also available to all other European countries) as “1944: Forced to Fight”

The DVD comes with English subtitles and features three spoken languages: English, German and Estonian. Running time of the movie is 96 minutes.

1944: Forced to Fight deals with the events of 1944 in Estonia, from the Battle of Tannenberg Line in July until the Sõrve Peninsula fell into the hands of the Red Army in November. The film focuses on the individual within the context of war, rather than war itself, and shows the war from both perspectives – those of the Red Army and the German Army.

In 1944 the Battle of Tannenberg would become one of the bloodiest conflicts of World War II. The SS are repelling the Russian invasion of Germany, but half of the infantry is made up of eastern Europeans, drafted in from Siberian labor camps and forced to fight their own brothers. 1944 Forced To Fight is the incredible and harrowing true story of one of the darkest periods of World War II. 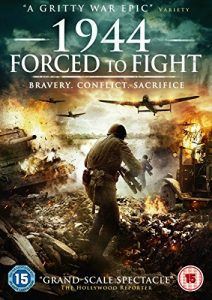 “Unlike most other countries, where single nationality was fighting for one side or faction, Estonian men had to choose between two Nations (fight for Germany or fight for Soviet-Union) in hopes for future re-independence or at least autonomy for their homeland. This specific war was the darkest time, as Estonian soldiers fought against fought each other. They hoped for the best solution, but they weren’t really ready for the worst, because neither the Germany or the Soviet-Union would never let them have their independence or any mayor freedom again.“