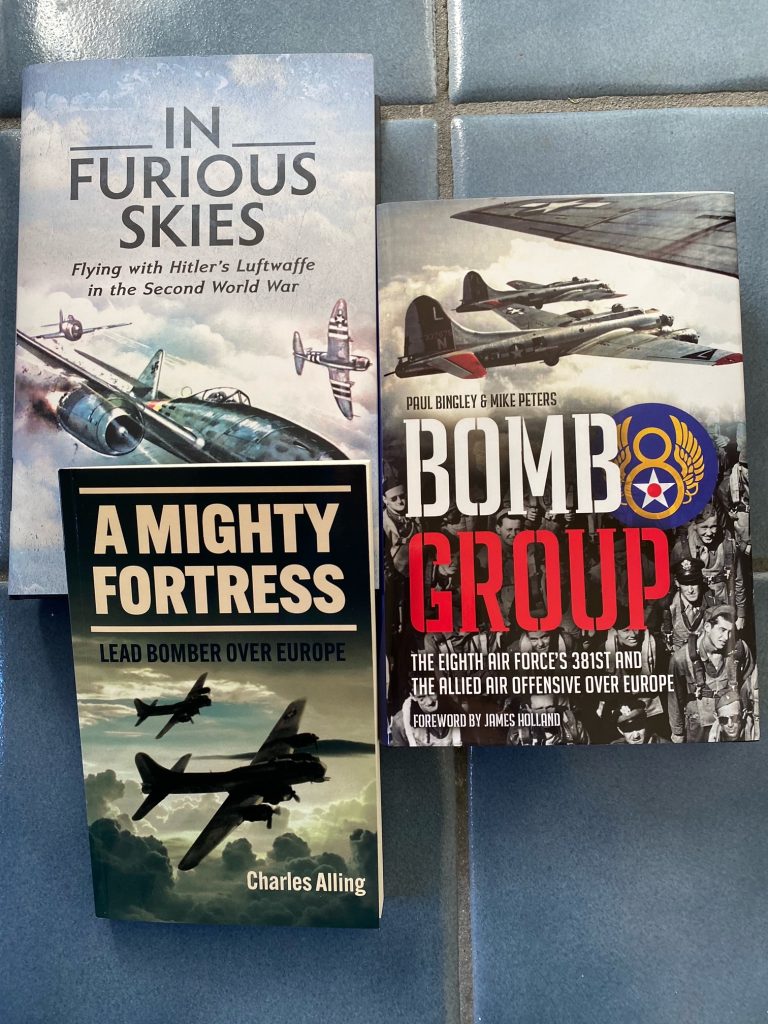 Being there . . . . to watch America’s brave bomber men in Boeing B-17 Flying Fortresses of the
Eighth Army Air Force fly daily late morning missions from bases in England to assail vigorously
and persistently strategic industrial and military targets throughout German occupied Europe.
Then, nightly, follow Britain’s Royal Air Force Bomber Command’s hundreds of four-engine Avro
Lancasters and tough, spirited Vickers Wellingtons engage in radar precision targeting of
German cities to pommel Hitler’s Third Reich into smithereens.
AGAIN, CASEMATE PUBLISHING OFFERS 3 TREMULOUS READS IN TIME FOR XMAS GIFT-GIVING
Two Allied, one enemy, all three unpretentious, simply written, each amazingly revelatory – –
Reviewed and highly recommended by Don DeNevi
With scrupulous regard for accurate historical and geographical detail, three fresh WWII aerial
warfare titles about wings and bombs, pilots and bombardiers, navigators and gunners, ground
observers and flight surgeons, engine mechanics and assorted aircrews come to life with
remarkable completeness. Little did this cautious reviewer expect to enjoy such refreshment
laced with real illumination about what it was like to fight, life or death, in the high upper
regions.
“A MIGHTY FORTRESS – Lead Bomber Over Europe”, by Charles Alling. CASEMATE PUBLISHERS:
2002, second edition republished in 2022, 163 pages, 5”x 8”, 37 b&w photos, sc; $16.95. Visit,
www.casematepublishers.com.
“BOMB GROUP – The Eighth Air Force’s 381 st and the Allied Air Offensive Over Europe”, by Paul
Bingley & Mike Peters. CASEMATE PUBLISHERS: 2022, 406 pages, 6”x 9”, 60 b&w photos, hc;
$37.95. Visit, www.casematepublishers.com.
“IN FURIOUS SKIES – Flying with Hitler’s Luftwaffe in the Second World War”, by Tim Heath. Pen
and Sword HISTORY, Books Ltd, dist. By CASEMATE PUBLISHERS: 2022, 261 pages, 6 ½” x 9 ½”,
48 b&w photos, hc; $42.95. Visit, www.casematepublishers.com, and www.pen-and-
sword.co.uk.
Via his “A MIGHTY FORTRESS – Lead Bomber Over Europe”, author Charles Alling, recipient
of the Distinguished Flying Cross and the Air Medal with FOUR Oak Leaf Clusters during WWII,
has rendered readers a truly rare, emotionally moving, heart-endearing portrayal of “being
there”. When such a deeply personal autobiographical story is dedicated to his beautiful, ailing,
sister, Prudence “Prudy” Kelsey Alling (1923-1944), see Dedication Page, one senses how the
remaining 163 pages will read: genuine, exceptionally well written, illuminated by flashes of
emotional caring, gentleness commingling with a resolute fighting spirit. It may well be that this
reviewer will never, ever forget Charles Alling at war and peace, the founder of the Alling
Institute for Ethics affiliated with The Foundation for Leadership and Ethics in New York City.
In “BOMB GROUP – The Eighth Air Force’s 381 st and the Allied Air Offensive Over Europe”,
co-authors Paul Bingley and Mike Peters spell out with remarkable completeness how the heart

of the famous Eighth Air Force consisted of its bombardment groups, each equipped with
scores of heavily armed four-engine bombers. These Boeing B-17 Flying Fortresses and
Consolidated B-24 Liberators were soon punching through the enemy’s defenses to bomb
targets vital to the war effort. They were crewed by thousands of young American airmen, most
of whom were volunteers. In short, Bingley and Peters detail how the 381 st crossed the Atlantic
in May of 1943. Arriving at RAF Ridgewell on the Essex-Suffolk border, its airmen quickly found
themselves thrown into the hazardous and attritional air battle raging in the skies over Europe.
The 381 st ’s path led from its formation in the Texas desert to its 297 th and final bombing mission
deep into the heart of the Third Reich. Bingley and Peter offer a wonderful accounting of how
the 381 st contributed to the strategic bombing campaign of “The Mighty Eighth”.
Meanwhile, told through the eyes of the Luftwaffe fighter and bomber crews themselves,
“IN FURIOUS SKIES – Flying with Hitler’s Luftwaffe in the Second World War”, thanks to first-
rate writer Tim Heath, explores previously unpublished first-hand accounts of the rise and fall
of one of the most formidable air forces in twentieth, twentieth-first, century military history.
Tim paints a harrowing, and haunting picture of the excitement, fear, romance, intertwined
with the brutality, futility, wastefulness, and great tragedy for everyone involved.
Within just nine years the once mightiest air force in the world had reached total collapse,
destroyed in part by the very people responsible for creating it. By 1944, the Luftwaffe, wearied
by aerial battles on multiple fronts combined with tactical mismanagement from the highest
levels of command, were unable to match their enemies in both production and manpower. By
this time the Luftwaffe was fighting for its survival, and for the survival of Germany itself, above
the burning cities of the Reich, facing odds sometimes as high as ten-to-one in the air