John Adams knew that Boston was going to be front and center in the battle for independence, and he was concerned about his family’s safety when he was away. Abigail and John and their four children had moved from Boston to Braintree in 1774 because of the impending conflict between Massachusetts Bay Colony and the British. Abigail was married to a man who, because of his leadership in the fight for independence, had a price on his head. When the British troops crossed the Atlantic Ocean to punish Boston for dumping 342 chests of East India Company tea into the harbor (an event coordinated by Sam Adams, who was John Adams’ second cousin), the city knew it was in the Mother Country’s crosshairs. The members of the Continental Congress were in Philadelphia, but they were not isolated from what was going on; thanks to their correspondence, John and Abigail kept one another current on all fronts domestic, martial, and political and she was her husband’s eyes on the plight of Boston, where the war for independence was destined to begin.

For Bostonians, the warning that “The British are coming” was more than just a rumor and by June, 1775, Bostonians recognized that enemy soldiers had their sights on Dorchester Heights, a strategic site that provided a view of the city and the harbor.  Colonial troops began to fortify Bunker’s Hill in preparation for the attack they knew was coming.

John had advised his wife to escape to the woods with the children if danger threatened. But Abigail Adams was no helicopter parent; she was a patriot and she wanted her son to witness the history that his father was helping to make, even if it meant showing a seven-year old boy that patriotism meant sacrifice. She and John Quincy Adams climbed to the top of Penn’s Hill in Braintree, twenty miles away, to watch the fighting.  Abigail knew it was a momentous day. The battle began on Saturday afternoon and was still going on the next afternoon. “The Day; perhaps the decisive Day is come on which the fate of America depends,” she wrote to her husband, sharing with him the tragic news that their friend and fellow patriot, Dr. Joseph Warren, had been killed in the fighting. 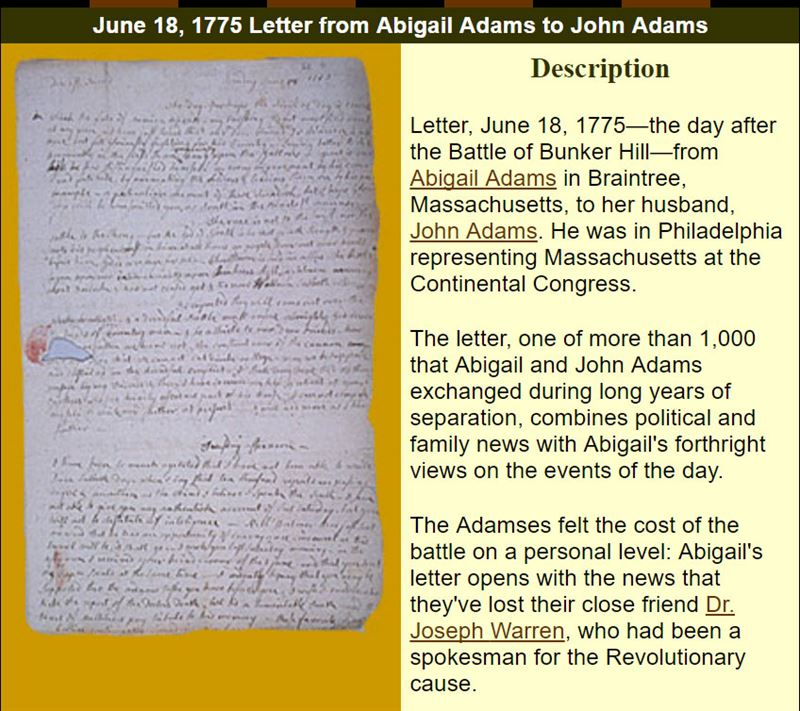 The noise of the cannon was so constant and loud that the family couldn’t eat, drink, or sleep.  Her son, who inherited the family trait of recording his thoughts, later wrote that the noise made by the roaring cannon haunted him. Recalling the event years later, in 1846, John Quincy Adams wrote that at any moment, his mother was in danger of being “butchered in cold blood” or taken hostage. The flames that engulfed Charlestown made a vivid impression on the boy. “I saw with my own eyes those fires, and heart Britannia’s thunders in the Battle of Bunker’s Hill.” 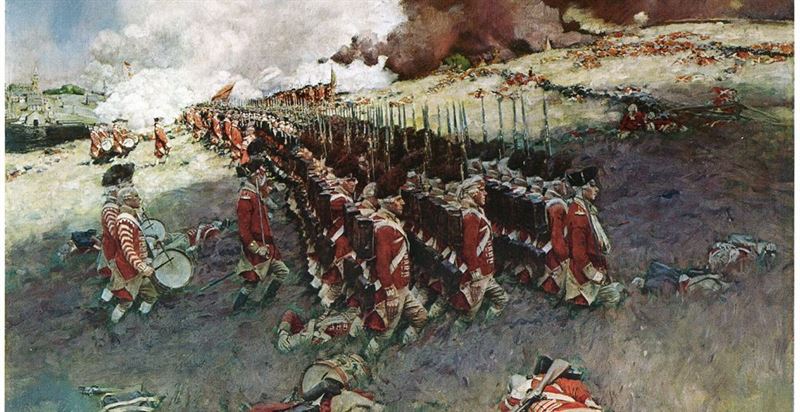 Abigail had told her husband that she intended to stay in Braintree until it was no longer safe; then, she wrote, she would stay with her brother-in-law. Charlestown was already burned, but she assured John that the spirits of the people remained high.  But, she informed him, the drought afflicting the area was severe and boded ill for the harvest.  Abigail’s letters to her husband were an eyewitness account of what Bostonians were enduring in the cause of freedom; although he was separated from her by miles, her letters provided him with a first-hand account of what his colony was going through as the front lines of the war struck home. The British would occupy Boston for almost a year until they evacuated in 1776, but the war was far from over.

Abigail had been an eyewitness from the beginning. Even by colonial standards, Abigail Adams was not your typical stay-at-home housewife, although she performed the accepted domestic tasks of managing a household, raising a family and keeping a home with diligence. She was such an exemplary manager that eldest son John Quincy Adams credited her with keeping the family financially solvent during the years when her husband was busy with the task of building a nation. But, as Abigail once pointed out to her husband when her husband showed less than convincing interest in her domestic advice, women were not respected for their work. He may not have valued her housewifely wisdom, but John Adams treated his wife as his intellectual equal, which she was, and their letters provide a deep and personal account of the founding of a nation.

The Adams Chapter of the Society of the Daughters of the Revolution recognized the courage of one of America’s most remarkable women. Standing on the spot where Abigail and son John Quincy watched the battle is the Abigail Adams Cairn, erected in 1896, as a monument to Abigail Adams, Founding Mother and eyewitness to history.