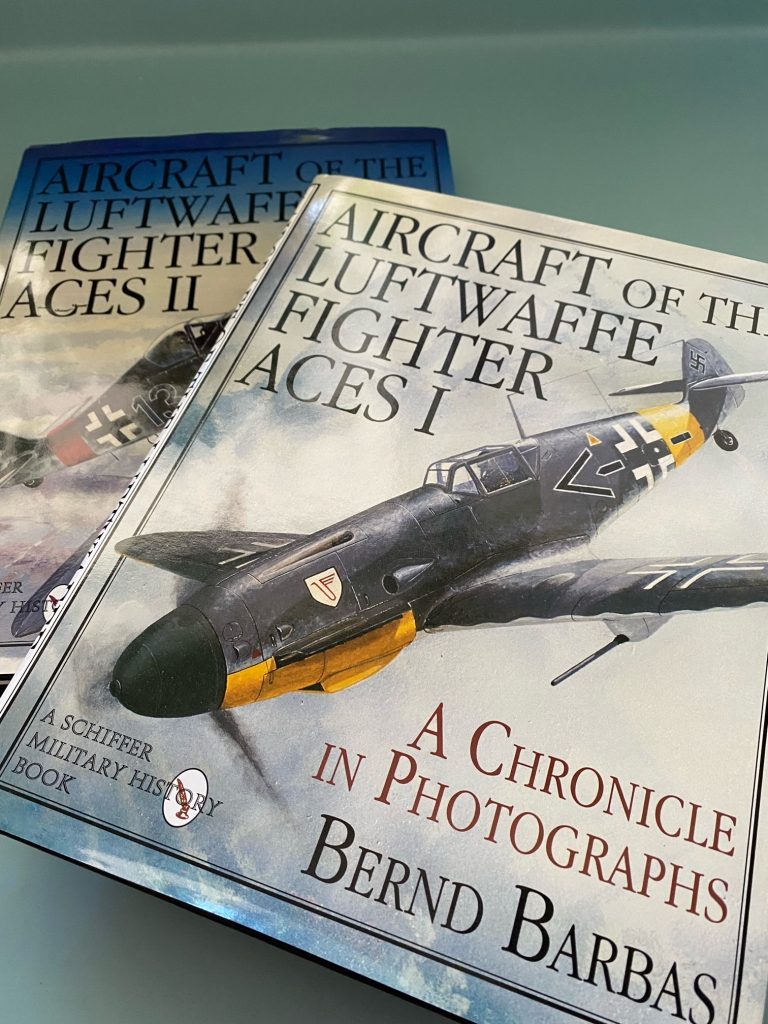 Being there . . . . to comingle with Germany’s elite fighter pilots, virtually all absurdly young, but
bright, eager, lounging in the sunshine, drinking their schnapps, energetically horseplaying
before legions of admiring, winsome young women, smoking their pipes and cigars, writing
letters and reading, while waiting for yet another harsh recall bell to go fly, bomb, kill and
destroy . . . . .

while resting, and stories about them since their portraits hung in the camp mess halls. Former
Kommodores of the 19 JG units presented in Volume 1, and the two dozen in Volume 2 are
especially applauded for tracking down snapshots of serious, deadly airfield activities, but more
of youthful men at play and carousing.
Assembling the photos, their rich captions of identifications, and triple-checking accuracies
required author-compiler Bernd Babas more than a decade of resolute, meticulous work. The
result of all his effort, and the resolve of countless others, is that we Americans are privy of
behind the battle scenes airfield activities. Opening Volume 1 and perusing the first few
photographs, especially of the three-man field crew loading the machine guns of the Bf 109G-
2/R6, two laughing and giggling as they look into the camera while lift the heavy belts from
their delivery encasement, while the third man is mesmerized by a black pet cat is on the
airship’s cowling retreating to the cockpit from the steel, still propellers. What is so hilarious is
the cat is in the same position as the JG motif painted on the side of the engine.
The two large photo albums are crammed with photos far more serious than jollying teenage
boys finding amusement while handling munitions for weapons of mass destruction. They are
also first-hand accounts of and accompanied with photos of the devastating effects of Allied
bombing of their airfields, young men with horrendous burns in the medical wings of airfield
hangers and housing, at mess after missions, scenes of seas of mud, aircraft stuck in layers of
snow in unbelievably freezing weather on the Eastern Front. Pilots such as famous Adolf
Galland and Erich Hartman, the world most successful fighter pilot with 352 victories, and his
beloved Bf109-G6, “Yellow 1”, are highlighted. Of course, rare photos of the JG7, the world’s
first fighter jet, and advanced Me26 jet, are presented with their pilots.

Wrote Oblt Erich Hartmann in the Foreword, “Looking back through photographs taken in those
difficult times made me realize how young and innocent we were; yet despite this, many of us
somehow managed to come through it all. But they also bring home that so many of my
contemporary airmen on both sides were not nearly so fortunate. When I look back and reflect
upon the war years, I can only hope that today’s youth will be spared the day-by-day
experiences we lived through in those times. I commend the author’s work as a valuable
enrichment to the record of aerial warfare. It is also my wish that it may contribute something
to mutual goodwill and international understanding amongst all who fly themselves or are
interested in aviation.”