Argunners will be publishing a series of amazing WWII photographs recently uncovered from the archives of General Charles Day Palmer, who was a four-star General. Most of the photographs were confidential photographs taken by the U.S. Signal Corps not fit for publication, Brig. Gen. was allowed to have them for private use after censoring (names of places etc.). Although this first part were more general photographs of WWII. The second part depict the true horrors of war. The final part ends with more photographs on the liberation and “war necessary destruction” as General Palmer remarked on one of the photographs

Charles Day Palmer was born in Chicago, Illinois on February 20, 1902. After graduating from Washington High School in Washington, D.C., he entered the United States Military Academy, where he graduated in 1924. During World War II, he worked in the British West Indies to establish military bases and ran projects on anti-submarine warfare.

In 1944, he became the Chief-of-Staff of the 2nd Armored Division, nicknamed “Hell on Wheels”, participating in the Invasion of Normandy, break-out from Saint-Lo and the crossing of the Siegfried Line. In October, he was transferred as Chief-of-Staff to the VI Corps, where he received a battlefield promotion to Brigadier-General.

After World War II, Palmer took part in the Korean War. During his career, he received various valor and service awards such as the Distinguished Service Medal, Legion of Merit and the Bronze and Silver Star. He passed away on June 7, 1999 in Washington, D.C. The photographs were shared by his grandson, Daniel Palmer, honoring the memories and service of his grandfather. 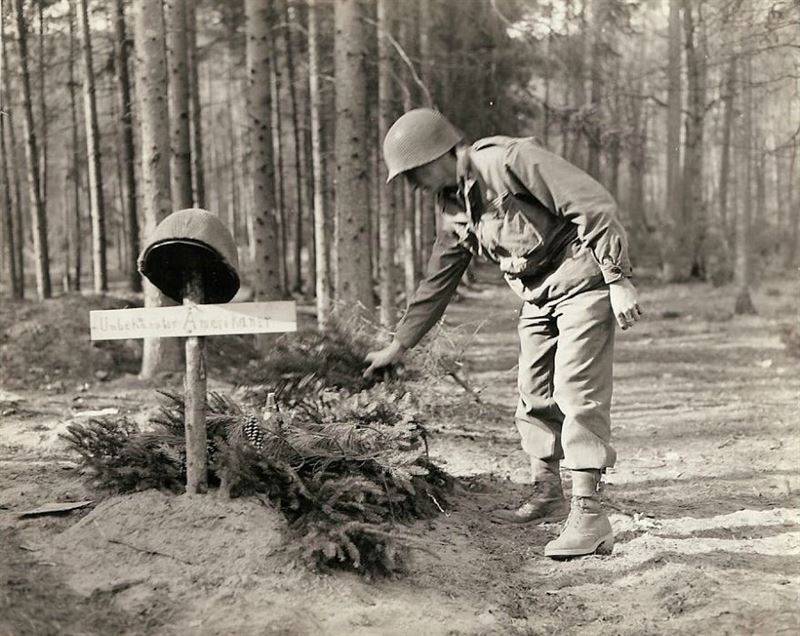 U.S. Soldier examines the grave of an unknown U.S. soldier, who was buried by the enemy before retreating. The first American soldier that noticed the grave, decorated it with mortar shells and ferns. (#P03)

Dead American and German soldiers at a cemetery before burial, place unknown. Each body is placed in a mattress cover. German prisoners are doing the work of digging the graves and placing the bodies in them. (#P04) 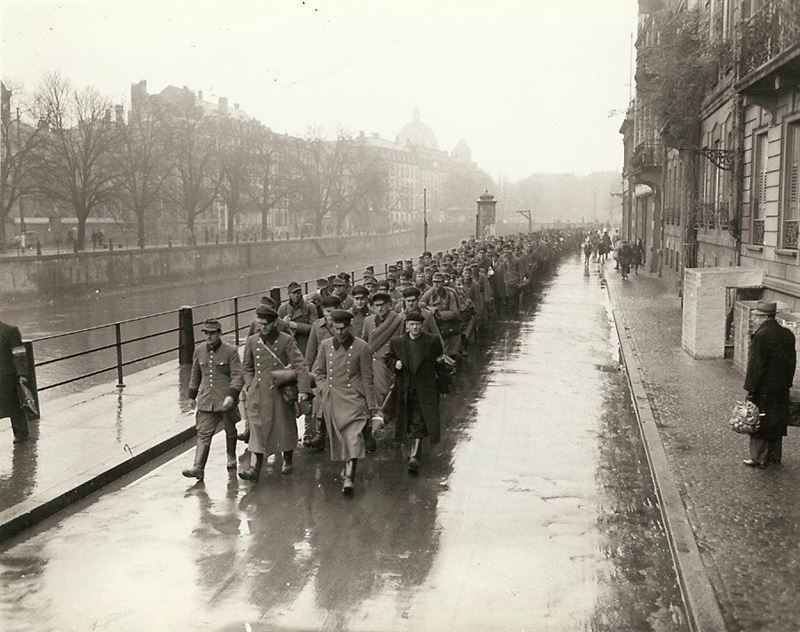 Prisoners of War from the German Military Police force and Gestapo agents of the city of Strasbourg are led to the 3rd Infantry Division. POW are escorted by the French FFI. (#P07) 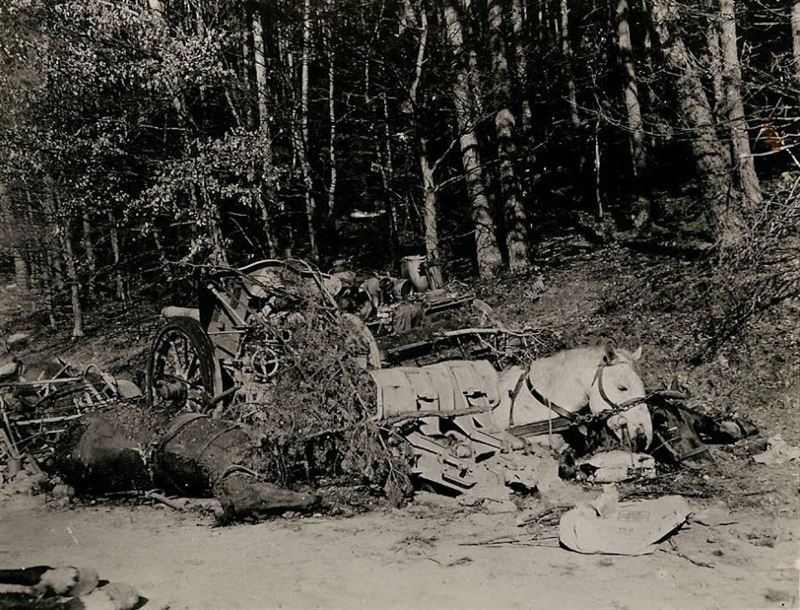 Dead horses and wrecked vehicles & equipment of a German convoy are strewn along the road in the vicinity of Lug, Germany. Following an attack from U.S. Artillery. The Germans were trying to escape encirclement by 3rd and 7th Armies. (#P08) 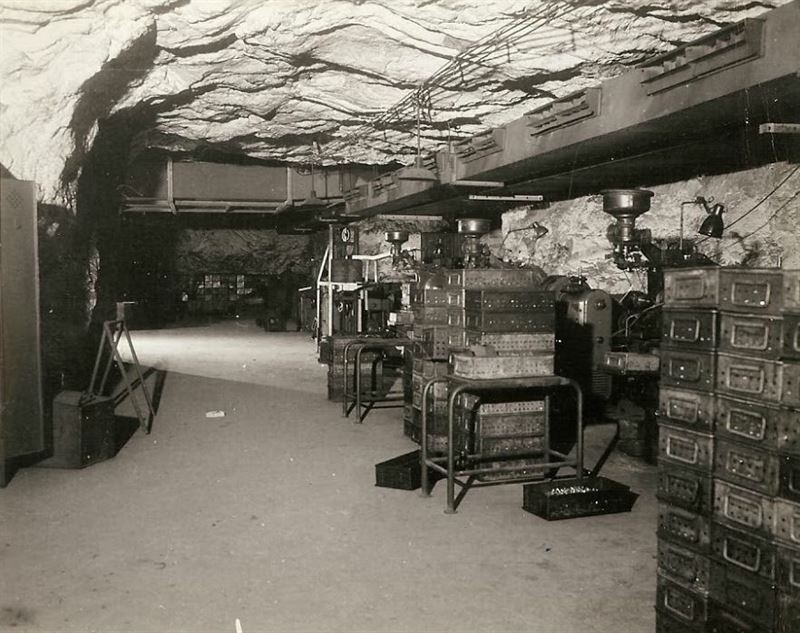 A German underground ball-bearing factory in Germany, where all size bearings were made. Shown is a row of polishing and grinding machines used to finish the bearings. This might be in Schweinfurt? (#P09)

English M-5 Anti-tank mines are used to blow up German Pill Boxes. 400 lbs of TNT are being set off inside the pill box. (#P11) 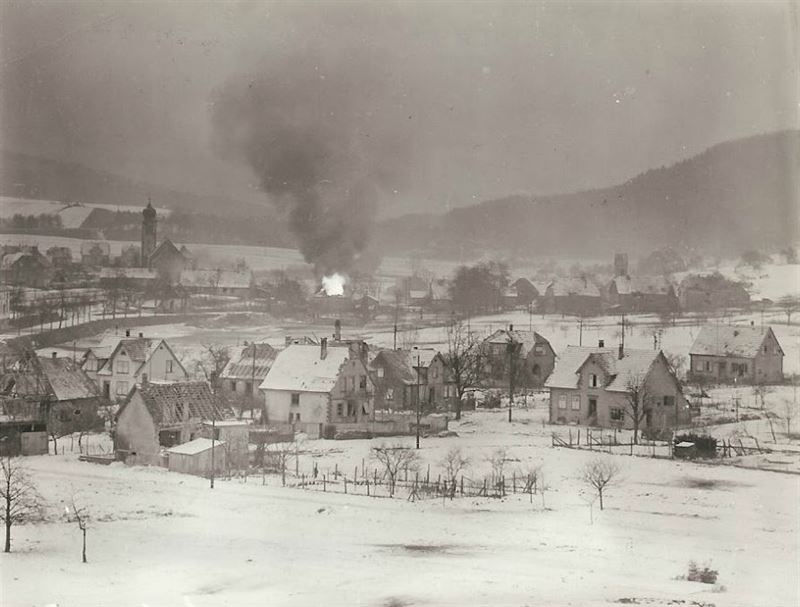 American forces are trying to recapture Wingen-sur-Moder from German mountain 6. SS-Gebirgsjäger Division troops, who infiltrated it during the night, dislodging American troops and taking a number of Prisoners. Hotel ‘Wenk’ and Gasoline are in yard and hit by a tracer bullet, resulting in the burning, as seen in photograph. In the church tower on the left is a German lookout, who is also sniping at the U.S. soldiers. (#P12) 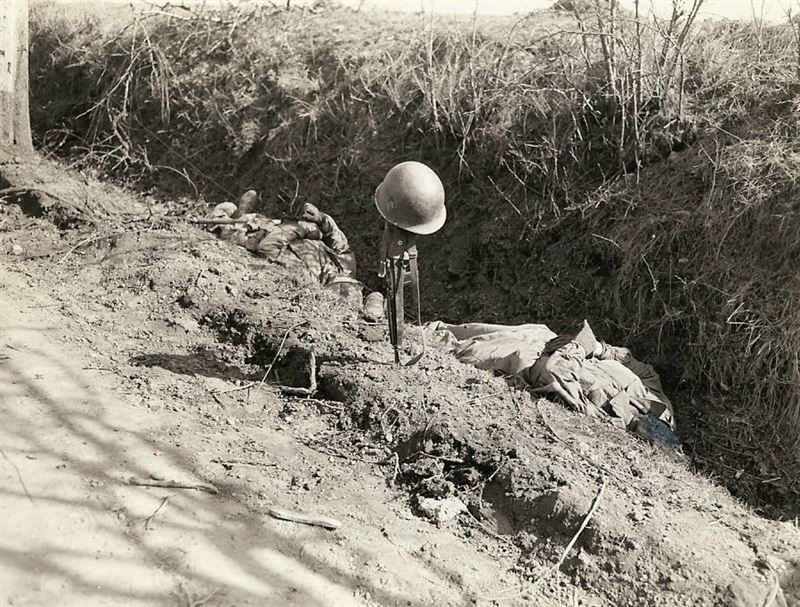 Helmet and Rifle mark the spot in a ditch by road where two Infantrymen gave their lives, during a new drive by Seventh Army which opened on a front of fifty miles from Saarbrücken to the Rhine. (#P13) 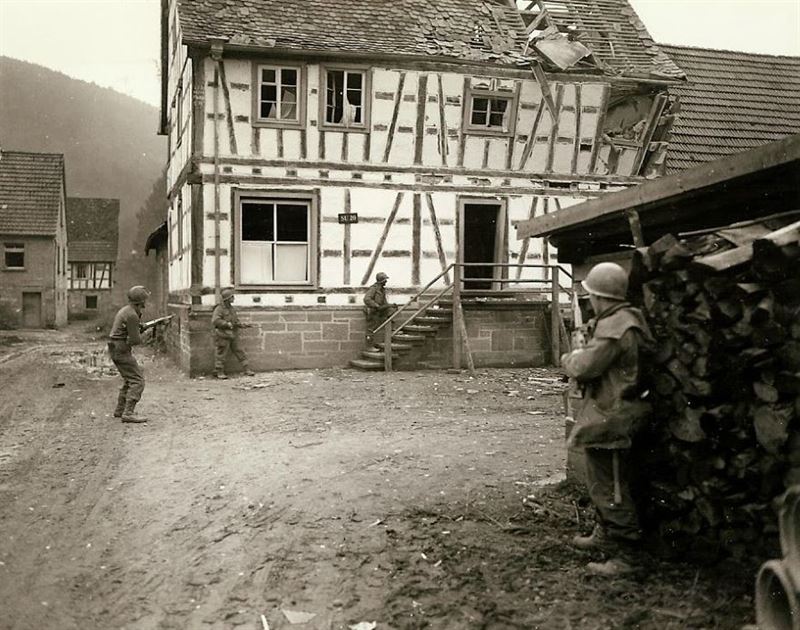 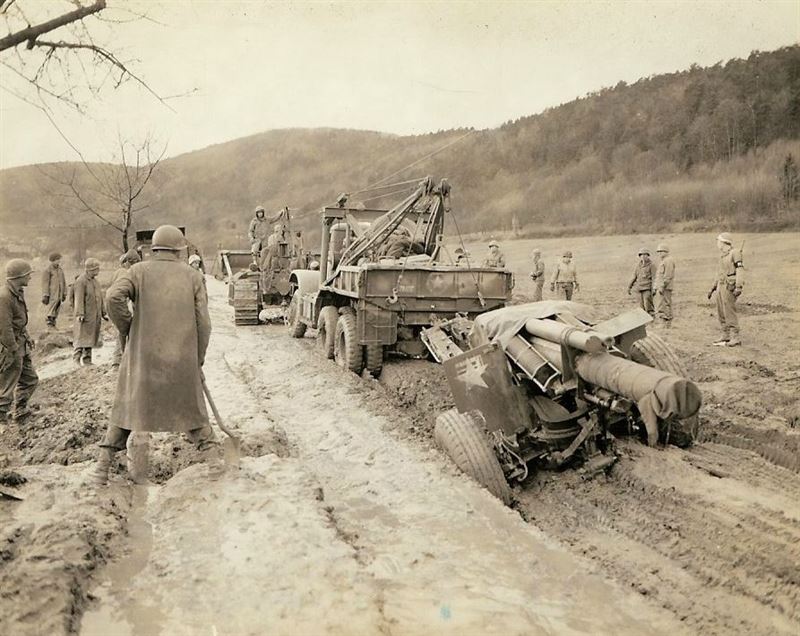 When this wrecker towing a 155mm Howitzer became stuck in the mud in a road, nothing less than a Bulldozer could budge it. (#P15) 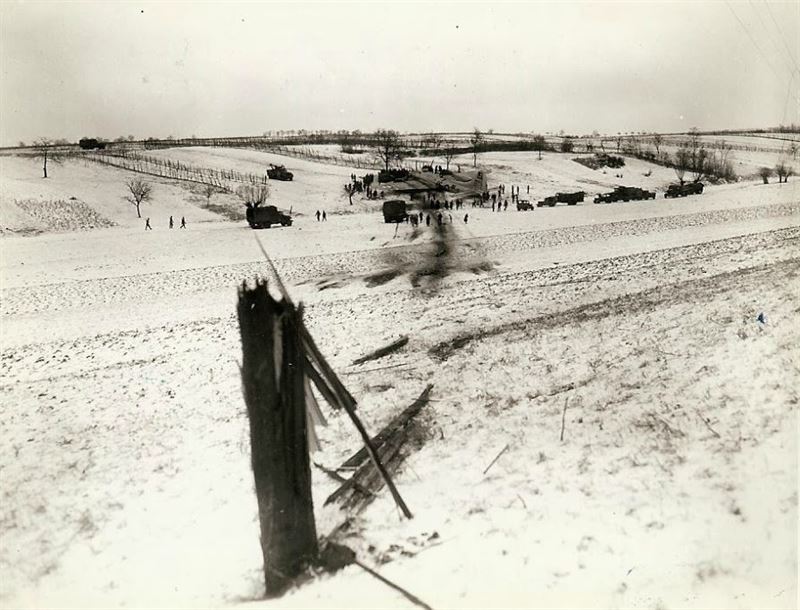 Path of a B-17 as it crash-landed into a snow covered field on the Seventh Army front. Pilot escaped with minor cuts when he rode the plane in after the crew bailed out. Note: Pole in foreground clipped by the plane as it came in. (#P16) 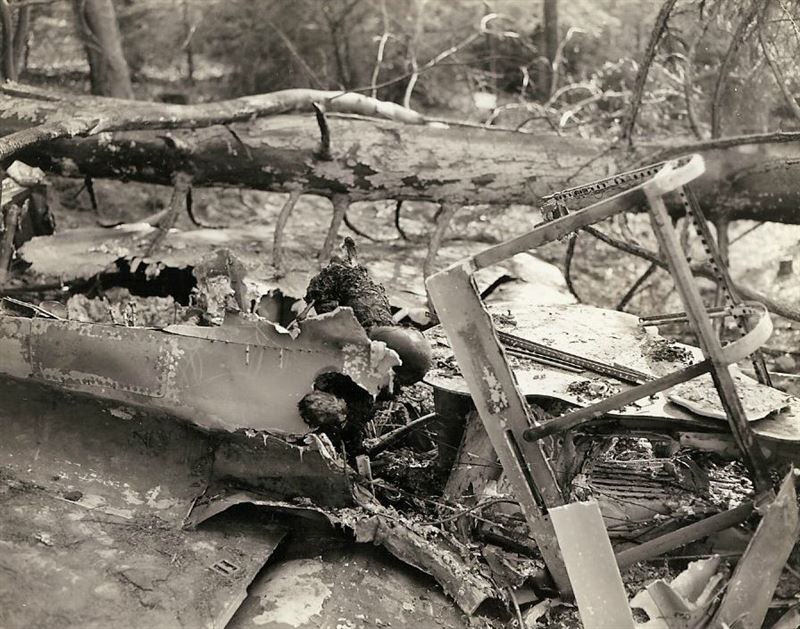 Charred remains of a German pilot, the plane was brought down by small arms fire on March 15, first day of Seventh Army offensive in Germany. – Interesting note, thanks to this forum, the plane was I.D. and it turns out that it is most likely an U.S. P-47! (#P19) 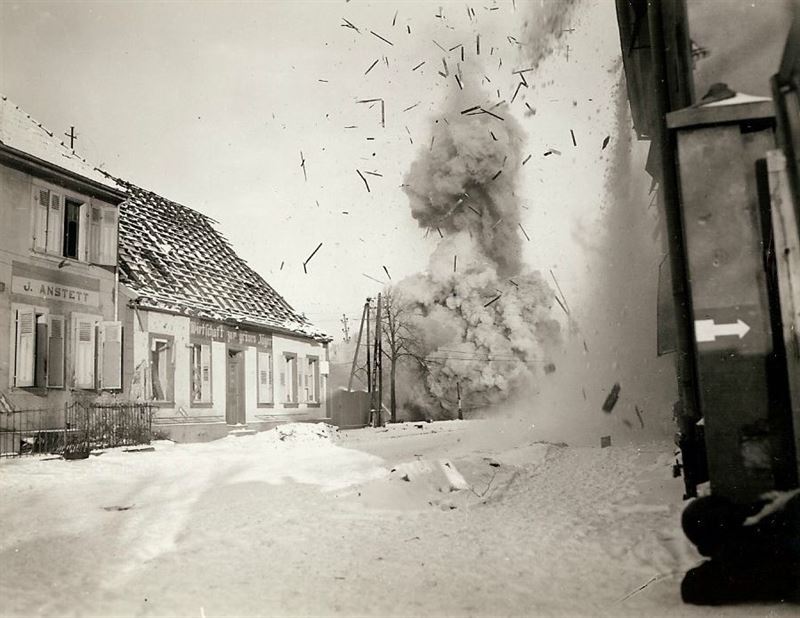 A German bridge is blown sky high by U.S. Engineers, destroying span as a defensive measure against German troops pressing towards the town. (#P20) 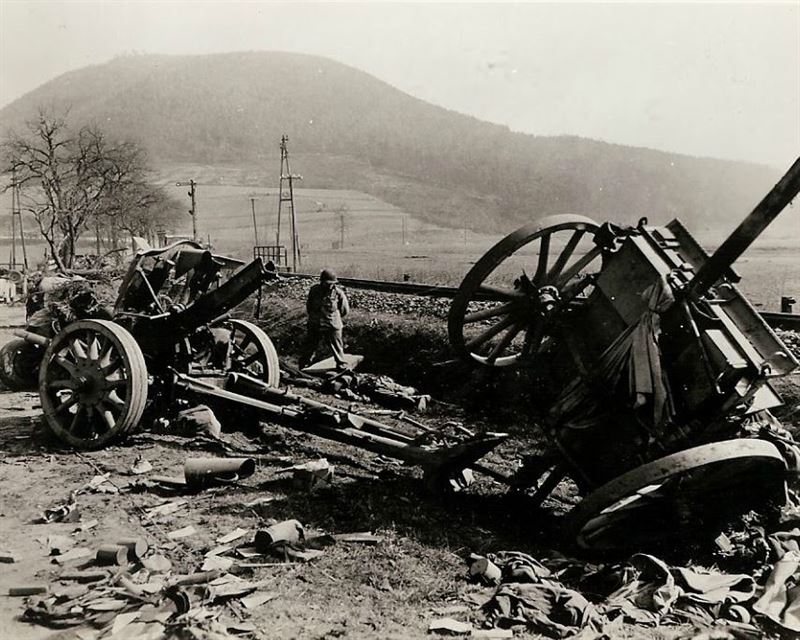 U.S. Soldier standing next to the remains of a German soldier he just discovered near German Howitzers, which were destroyed by the Seventh Army. (#P21)

We are looking in help to identify some of the places; personalities, equipment or units that are shown on the photographs, as many of the backsides are unreadable due age of time and wartime censoring. Contact us, if you can help. Supply the referral number in the e-mail (ex. Backside – #P01) so we know which photograph you are talking about.