Cate Clark began her interest in the World War 2 formation, the 1st Australian Armoured Division after meeting local identity Don McDonagh. Don, almost an icon in the local community of Gunnedah (in north west New South Wales, Australia) was looking to pull together some research on the 1st Australian Armoured Division after realising that no-one in the local community remembered the World War 2 experience of having an entire division camped in the region.

And yet, no one remembered them. After a car trip with Don around the district with Don pointing out where each of the units had been situated, and after hearing some marvellous yarns from the few people who didactually remember the division, Cate decided to do something to record the history before it was forgotten. 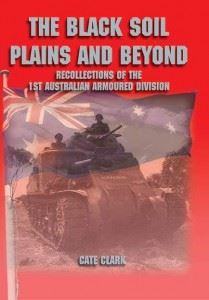 The Black Soil Plains and Beyond is based upon the recollections of over 150 individuals including veterans and local citizens. Primarily a social history rather than a military one, the book nevertheless utilises key primary sources such as war diaries and training manuals, as well as oral recount, to produce a 364pp hardcover publication covering the Division from its inception in 1941 until its disbandment in 1943.

Coming complete with photos, cartoons and poetry from the black soils of the Narrabri region of NSW to the dry of Western Australia and the humidity of North Queensland, Indonesia and New Guinea, The Black Soil Plains and Beyond traces the history and humour of many of the original 1st Australian Armoured Division diggers.

The Black Soil Plains and Beyond is available by contacting Cate Clark at: [email protected] or messaging her through her Facebook page: www.facebook.com/theblacksoilplainsandbeyond. Cost is $A55 + postage. There are also limited copies of her first publication on the 1st Australian Armoured Division ~ To Fight and Do Our Best. Cost is $A45 + postage.