In 1879, speaking to the graduating class of the Michigan Military Academy, Civil War General William T. Sherman said, “Some of you young men think that war is all glamour and glory, but let me tell you, boys, it is all Hell!” Sherman knew, first-hand, that war is hell, but thanks to the photographs of Mathew Brady, Americans who had never been anywhere near a battlefield learned the truth of the redoubtable soldier’s words.

Brady was the son of Irish immigrants who had settled in New York. Brady himself learned his craft when he learned daguerreotypy, the forerunner of photography, in which a mirror image was created on a copper plate with a silver surface. Plying his craft in New York City, Brady captured the images of famous nineteenth-century American writers James Fennimore Cooper and Edgar Allan Poe. When he moved to Washington D.C., his subjects were the nation’s pre-eminent politicians, but by the time that the Civil War broke out, Brady was ready to record the conflict in a unique way. He used his own funds to put together a group of photographers who were assigned to follow the troops. 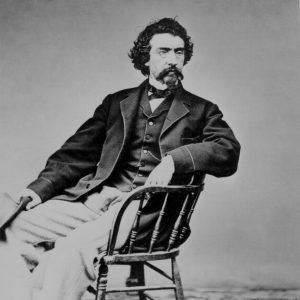 The declaration of war saw an influx of soldiers, journalists, and job-seekers flooding the nation’s capital. Brady had sent one of his photographers, forty-one year-old Alexander Gardner, to open a new studio in Washington D.C. and Gardner was quick to capitalize on the opportunity, photographing soldiers in his studio or in tents. But the staged photographs of the studio would not last.

That changed in September, 1862. The Brady team had been in place for the First Battle of Bull Run, but it was when the photographs from Antietam, the bloodiest single day of battle in American history, were seen that the ugliness of war was visible to spectators. Gardner had a new technique known as the stereograph; two lenses, capturing two photographs at the same time, created an image that, when seen through a viewer, presented a three-dimensional image to the mind. The photographers were Alexander Gardner and his assistant, James F. Gibson; Gardner began taking his photographs two days after the horrible battle, when many of the bodies had not yet been removed for burial. One of the most reproduced photographs of the war is a scene of fallen Confederate soldiers along the Hagerstown Pike, the bodies bloated in death.

A month after the battle, Brady exhibited the photographs in a show called The Dead of Antietam at his New York City studio. These images would be the first time that photographs were taken of a battlefield with the dead still strewn upon it. They were also the first to be shown to the public in mass numbers because, at this time, newspapers still lacked the technology that would have made printing the photographs possible.

Viewers at the gallery were shocked but the New York Times recognized the value of the exhibit. “Mr. Brady has done something to bring home to us the terrible reality and earnestness of war. If he has not brought bodies and laid them in our door-yards and along the streets, he has done something very like it.” The reporter, aware of the impression that the photographs made, added, “Broken hearts cannot be photographed.” 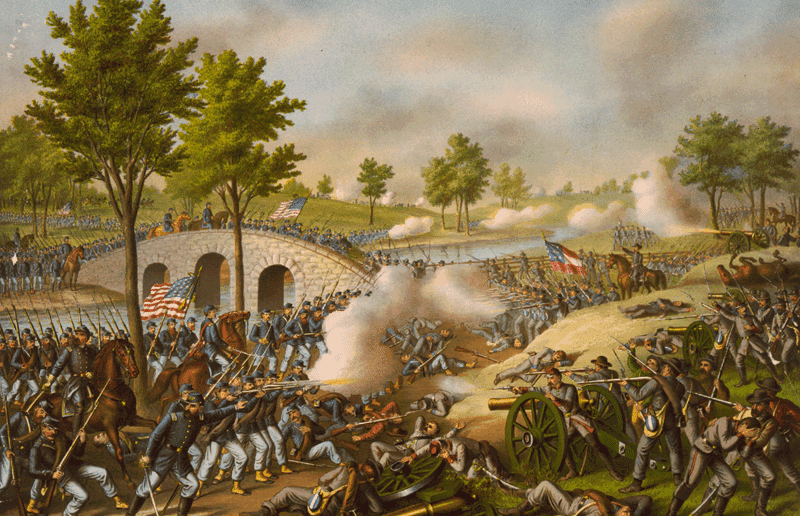 For all his service, Brady’s contribution to the war left him in debt. But he sold his collection of photographs to the federal government in 1875; the $25,000 that he received was enough to pay off his debts. Poverty continued to plague him, however and when he died in 1896, the New York 7th Regiment Veteran’s Association paid the costs of his funeral.

The Battle of Antietam took place in Sharpsburg, Maryland and was the first Civil War battle fought in the North. Recognized as the bloodiest day in American history, the battle between Robert E. Lee’s Confederate forces and the Union Army of George McClellan saw more than 22,000 casualties. The battle itself failed to provide a decisive victory for the North or a crushing defeat for the South, but it did halt the Rebel advance into northern territory until, of course, the following year and the three-day Battle of Gettysburg.  Because Antietam was enough of a victory for the North, President Abraham Lincoln was able to issue the Emancipation Proclamation which gave the Union forces a reason for their fight; instead of fighting to force the South to return to the Union, the war had a moral compass. Antietam made it possible for Lincoln to emancipate the slaves held in bondage in the parts of the South which were in rebellion. The war would endure for two more years and the nation would suffer greatly, but thanks to Mathew Brady and his photographers, the suffering would be shared.