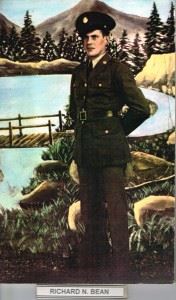 The Department of Defense POW/Missing Personnel Office (DPMO) announced today that the remains of a U.S. serviceman, missing since World War II, have been identified and are being returned to his family for burial with full military honors.

Army Pfc. Richard N. Bean, 24, of Manassas, Va., will be buried on Oct. 3, in Quantico, Va. On June 15, 1944, as part of an Allied strategic goal to secure the Mariana Islands, U.S. forces were ordered to occupy Saipan. After a month of intense fighting, enemy forces conducted a suicide assault, known as a banzai attack. This was designed to inflict as many casualties as possible against the 105th Infantry Regiment (IR), 27th Infantry Division (ID). During these attacks, elements of the 105th IR sustained heavy losses, with more than 900 soldiers killed or injured. Bean was reported missing in action on July 7, 1944.

On July 8, 1945, with no new information concerning Bean or 21 other service members of the 105th IR, investigators issued a presumptive finding of death. In November 1948, the American Graves Registration Services (AGRS) reviewed the circumstances of Bean’s loss and concluded his remains were non-recoverable.

In Sept. 2013, several Japanese non-governmental organizations, with oversight from a private archaeological company, recovered human remains and personal effects belonging to American servicemen from an unmarked burial. The remains were turned over to the Joint POW/MIA Accounting Command (JPAC).