In 1944, the Allies firmly turned the tide of World War II with a series of sweeping triumphs in Western Europe during Operation Overlord. The victorious D-Day beach landings in northern France paved the way for the liberation of Paris, which had been under Nazi occupation since 1940. Thereafter, the Germans were in retreat as the Allies thrust further into France toward the Third Reich’s border. In Eastern Europe, the Red Army advanced toward the Reich’s eastern frontier. Nazi Germany was on the brink of defeat by September 1944.

Yet, despite all Germany’s defeats, the Allied advance in Western Europe started to run out of steam after the fall of Paris. The rapidly advancing Western armies had stretched their supply lines. Even though the Allies captured the port at Antwerp in September, the harbor there remained closed off.

The Allies attempted to end the war in 1944 with Operation Market Garden. That was an operation to capture the lower Rhine region of the Netherlands, which would pave the way for an Allied invasion of Germany from the West. However, that paratrooper operation failed to fulfil its primary objective. The Allies also lost approximately 18,000 troops during Operation Market Garden.

Such setbacks for the Americans and British inevitably convinced some of the Nazis that they could mount an effective counter offensive in Western Europe from October 1944. The loss of occupied territory in Western Europe enabled the Germans to bring together their remaining reserves within a more concentrated area. Germany’s Western troops also remained reasonably well equipped as the Third Reich’s armament production reached its peak during the summer of 1944. Thus, the Germans were not entirely beaten by October 1944.

Therefore, the Nazis established a plan to launch a large-scale counterattack in Western Europe during the winter of 1944. For that operation (Operation Watch on the Rhine), German amassed approximately 200,000 thousand troops within the cover of the Ardennes Forest. The Germans organized those troops into four armies, which included the Sixth Panzer Army that was supposed to retake Antwerp. The overall objective of the operation was to split and encircle the U.S. and British armies in Western Europe and seize the port city of Antwerp.

Had Germany’s Ardennes operation fulfilled such objectives, it would have been a shock defeat for the Allies in Belgium and France. A large-scale German counter offensive was almost inconceivable to the Allies at that time with victory seemingly all but assured. The Nazis anticipated that victory at the Battle of the Bulge would convince the Western allies to settle for a negotiated peace settlement. That would enable them to divert more resources to the Eastern Front to deal with the Russians.

However, Germany’s Ardennes offensive was a considerable gamble. Germany’s General von Rundstedt is quoted as saying: “We gamble everything now. We cannot fail.” The Third Reich was committing its last substantial reserves to a large counterattack instead of establishing a stronger defensive line along its border. The operation only had a very limited chance of success as the Third Reich’s oil supplies had been become increasingly depleted. Furthermore, the Allies had air superiority in Western Europe. Thus, the Battle of the Bulge was a last throw of the dice for the Third Reich. 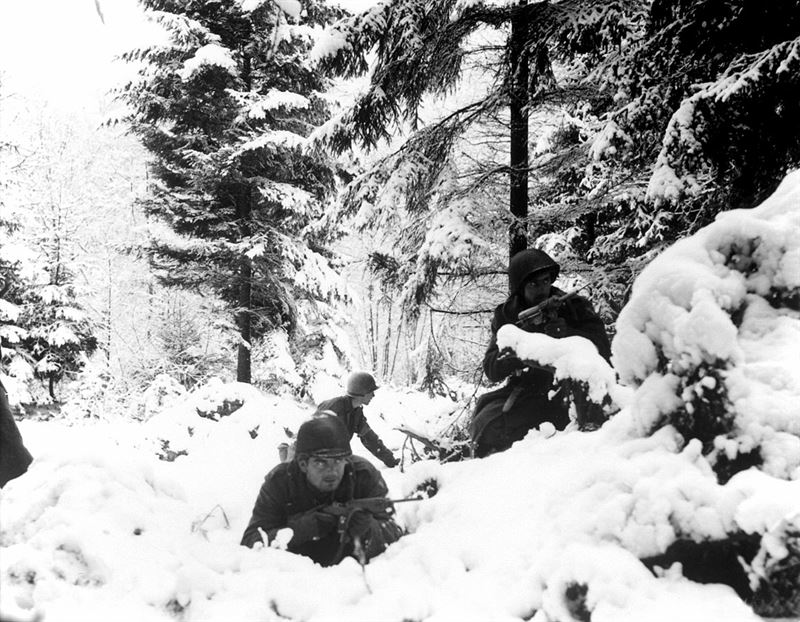 The Germans Attack at Ardennes

Nevertheless, the Third Reich launched Operation Watch on the Rhine in December 1944. The Battle of the Bulge began on December 16, 1944. The initial German attack through the Ardennes caught the Americans completely by surprise. Allied reconnaissance planes had not fully detected the presence of the Fifth and Sixth German Panzer armies that bombarded U.S. troops at the Loshein Gap. The Ardennes Forest, combined with the overcast weather conditions, camouflaged the build up of German troops from Allied aircraft before the battle.

Consequently, U.S. troops retreated in some disarray during the opening days of the Battle of the Bulge. The Germans mounted a substantial armored attack with Panzer tanks that the Americans were not ready for. Nor could Allied aircraft provide much support due to the overcast weather conditions in the opening phase of the battle. Consequently, the Germans advanced rapidly during the early onslaught.

The American Seventh Armored Division slowed down the Sixth German Panzer Army after the first day. However, that Allied division was heavily outnumbered and could not match the Sixth Panzer Army. Consequently, Clarke’s Seventh Armored Division withdrew from St Vivth, which fell to the Germans. Thereafter, about 9,000 U.S. troops surrendered at the Schnee Eifel region. Soon after, Stavelot, which included invaluable U.S. fuel supplies, also fell to the Nazis.

The initial German assault penetrated the Allied line in Belgium. Thus, the battle became known as the Battle of the Bulge due to the bulge the German advance generated in the Allied line. However, the Nazis still had much to do to win the battle.

Despite the onslaught, Eisenhower was not in a panic. He later stated, “I didn’t get frightened until three weeks after it had begun, when I began to read the American papers and found… how near we were to being whipped.” The German thrust provided an opportunity for the Allies to deal a big blow to the Third Reich’s army.

The Allies started to regroup when it became clear they were dealing with a major German counterattack in France and Belgium. The Germans could not hold Stavelot for long as U.S. troops retook that town. Thus, the Nazis lost crucial fuel supplies they desperately needed to sustain Operation Watch on the Rhine. 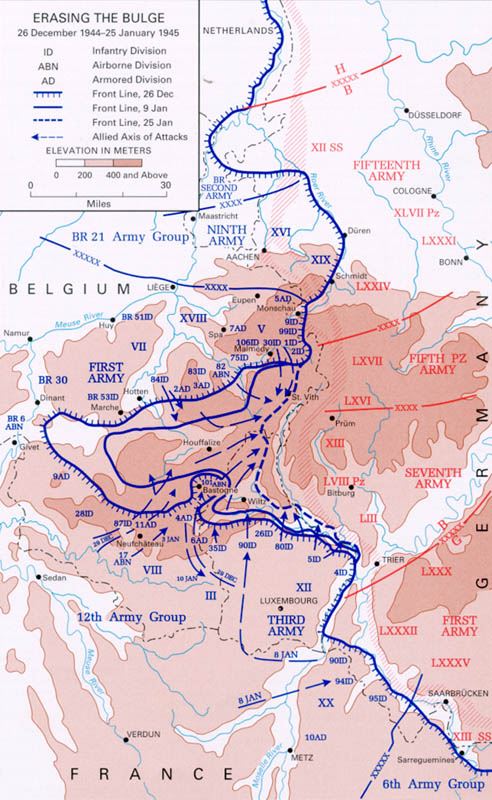 The Siege of Bastogne

Thereafter, the attention of the battle shifted to Bastogne. Bastogne was not a major target for the Germans from the outset. However, that city became important to both sides as it included a network of crossroads. The Germans deployed three divisions to capture Bastogne. Those divisions needed to defeat the American 101st Airborne Division that guarded the city.

The American 101st Airborne Division was among best in the U.S. Army. However, it was also outnumbered by the three German divisions attacking Bastogne. To ensure Bastogne could be held, the Americans sent Patton’s Third Army to the city. However, it would take days for Patton’s reinforcements to arrive there. 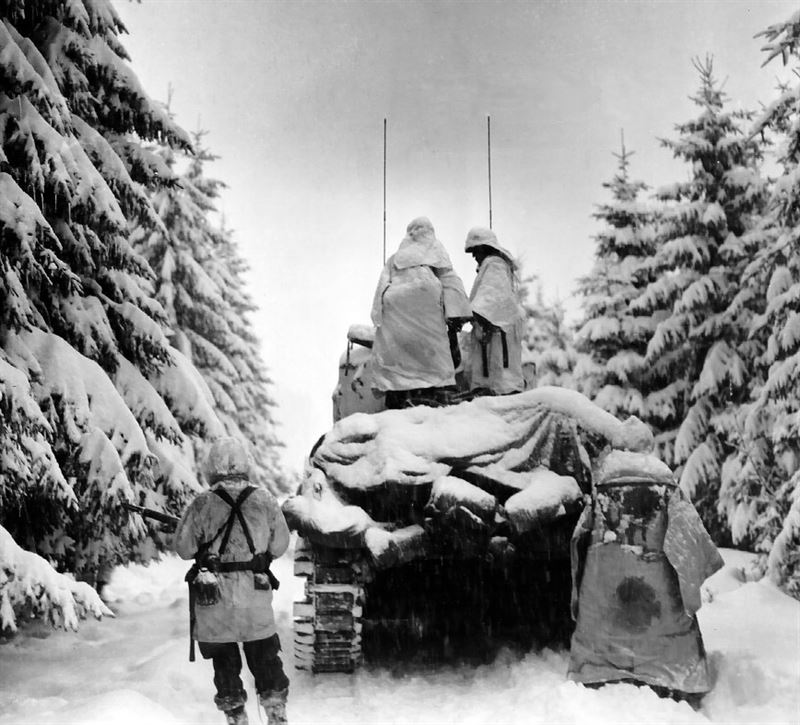 The Germans surrounded Bastogne from three sides. That left the Airborne Division’s supply lines cut off on the ground. Yet, the American defenders remained firm in Bastogne as the Germans attacked in somewhat piecemeal fashion.

The influx of supplies helped the Airborne Division hold out. The Third Army arrived at Bastogne on December 26 to relive the besieged city. The Allies also increased air support for the ground troops with bombers bombing German supply dumps. Consequently, the Siege of Bastogne ended with the Allies holding the city.

The Siege of Bastogne is considered the turning point of the Battle of the Bulge. After relieving the city, the Third Army began a counterattack against German troops who had initially encircled Bastogne. However, the Third Army did not receive expected support from Montgomery’s forces further north. Monty doubted that his troops were adequately equipped for the winter conditions. Without such support, the Third Army could not trap escaping German forces. 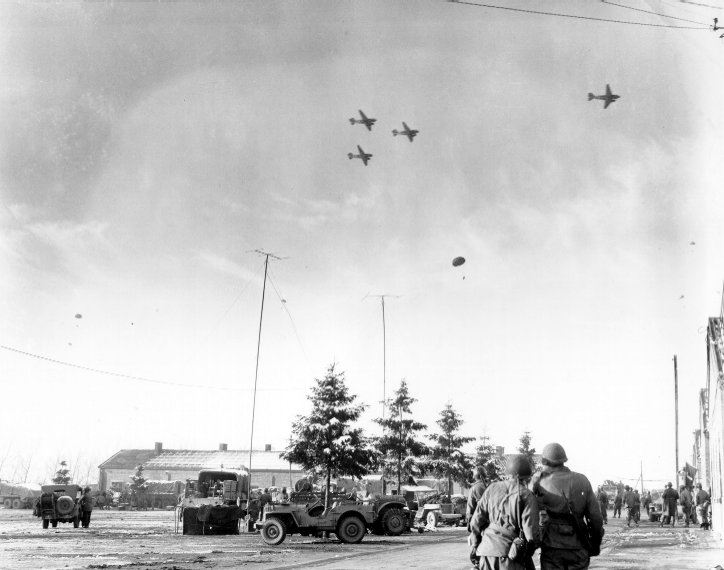 Montgomery’s refusal to support Patton in the north generated tensions within the Allied command. General Bradley threatened his resignation if Eisenhower did not remove Monty from command. However, Eisenhower did not do so. A German officer at the Battle of the Bulge later stated: “Montgomery’s contribution to restoring the situation was that he turned a series of isolated actions into a coherent battle fought according to a clear and definite plan. It was his refusal to engage in premature and piecemeal counterattacks which enabled the Americans to gather their reserves and frustrate the German attempts to extend their breakthrough.”

The Battle of the Bulge in January

Even though Germany’s Operation Watch on the Rhine had been effectively defeated by the beginning of 1945, the Battle of the Bulge dragged on. The Luftwaffe launched Operation Bodenplatte at the start of January. More than 800 German planes attacked Allied airfields in the Low Countries. It was a bold attempt to gain a degree of air superiority for the Luftwaffe in the Battle of the Bulge.

Germany also attempted a renewed offensive, otherwise Operation Nordwind, to capture Strasbourg during January. After capturing Strasbourg, the Germans could then attack the Third Army at the rear. Although that operation inflicted heavy losses on the U.S. Seventh Army, the Nazis could not take Strasbourg.

German troops had already started withdrawing from the Ardennes in January when the battle was still on. Not until the Nazis decided to withdraw the Sixth SS Panzer Army was the Battle of the Bulge effectively over. The Germans retreated across the Rhine. By February, the Allies had restored the front lines in Western Europe to roughly their original positions before the battle began. 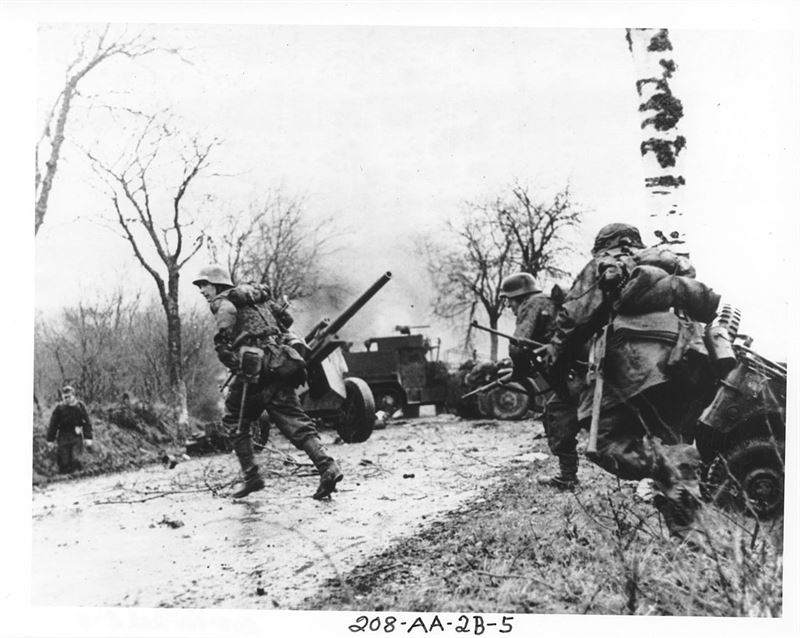 The Aftermath of the Battle

The Battle of the Bulge had taken a heavy toll on the German army. Germany lost an estimated 12,000 troops during the battle along with approximately 700 tanks. The U.S. Army had lost about 8,607 soldiers. The Third Reich had expended much of its final reserves, which left the way clear for the Allied Rhineland Offensive.

Thereafter, the Western allies advanced rapidly into Germany after crossing the Rhine. The Red Army pressed into Eastern Germany as it closed in on Berlin. The Battle of Berlin in April and May was the final major battle of World War 2 in Europe. After the fall of Berlin, Germany surrendered to the Allies on May 8, 1945.

The Battle of the Bulge was ultimately a doomed German offensive from the outset. Field Marshal Walter Model reputedly gave the operation only a 10 percent chance of success. Logistically it was too big an operation for Germany to mount at that stage with notable gasoline and diesel fuel shortages. Such fuel shortages for transportation led to more general supply shortages throughout the Third Reich’s logistical line during the battle. Therefore, Germany could not sustain its initial advances at the Ardennes.

Nor was the Battle of the Bulge a genuine last chance of victory for the Third Reich as is sometimes suggested. It was, in fact, merely a last throw of the dice from Germany to avert an outright surrender. Even if the Third Reich had won the Battle of the Bulge, however, that would not necessarily have ensured an armistice with the Allies. Germany would still have had to somehow halt the Red Army’s relentless advance in Eastern Europe in 1945. Furthermore, the Western allies could have still defeated Germany with the atomic bomb later in 1945 and expanded the front in Italy.

Germany’s last realistic chance of winning any kind of victory lied in defeating the Western allies on the beaches of France earlier in 1944. Had the Germans prevented the Allies re-establishing a front in France during D-Day, they could have feasibly defended Axis oil supplies in Romania and halted the Red Army’s thrust into Poland. Under such circumstances, the Russians might have considered a separate armistice with the Third Reich.

As it was, however, the Third Reich swiftly crumbled after the Battle of the Bulge. The German army could not mount an especially strong defence of the Reich after its shattering defeat at the Ardennes. World War II was ultimately a lost cause for Germany by the winter of 1944 that no operation could realistically salvage.