Hill 60 had been taken by the Germans in November 1914 during the Battle of First Ypres (Flemish: Ieper). Due to its height it provided an excellent vantage point over Ypres, Zillebeke and the surrounding area.

The British blew several mines under the area on 17th April, and captured it with very few casualties. However the Germans then commenced a series of counter-attacks to re-capture the position. The fierce fighting on 20th April resulted in the award of three Victoria Crosses to men of the 1st Battalion, East Surrey Regiment, in an action described in the regimental history as “…one of the hardest fights that the battalion has experienced.”

The battalion’s war diary gives some indication of the how desperate the situation was:

“20th. A quiet time till 11am then heavy shelling of the hill, communication and support trenches commenced, with great effect, the Germans scoring many direct hits with heavy howitzers, trenches were blown in and many men killed and buried… During this time the Germans were crawling up their old communication trenches and flinging bombs in to fire trenches, but could make no headway owing to our hand grenades and rifle fire… About 3pm the Germans in front… attempted to assault that trench, but on rising from their trench were hurled back by hand grenades and rifle fire. In this action, Pte Dwyer, D Coy greatly distinguished himself by crawling up the parapet and flinging hand grenades at the enemy, he himself being under a perfect hail of enemy bombs… Now a most terrific bombardment of the position commenced, which lasted for two hours, the hill during this time being a mass of smoke flame and debris. The enemy employed shells giving off asphyxiating gases freely… By this time, every man from the support trenches had been sent to reinforce the fire trenches on the hill and still more men were wanted… reinforcements arrived about 6pm and… 1st Bedfords took over… the hill position. The bombardment of front line lasted to about this hour and after this all their artillery fire was directed against reserve and support trenches and lines of approach: this continued well into the night, and abated somewhat about midnight. Throughout the night until 3am the enemy repeatedly assaulted our trenches on the hill with bombs, only once did they succeed in gaining a footing and then they were immediately driven out. Once during the night the enemy attempted to assault the trench held by B Coy but were immediately driven back by rifle fire…From 3 to 6am the situation was much quieter.”

The three Victoria Crosses awarded to the men of the battalion for their actions that day were as follows: 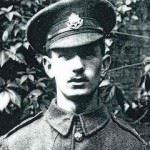 Private Edward Dwyer, aged 19, from Fulham. His citation in the London Gazette reads “For most conspicuous bravery and devotion to duty at Hill 60 on the 20th April, 1915. When his trench was heavily attacked by German grenade throwers he climbed on to the parapet, and, although subjected to a hail of bombs at close quarters, succeeded in dispersing the enemy by the effective use of his hand grenades. Private Dwyer displayed great gallantry earlier on this day in leaving his trench, under heavy shell fire, to bandage his wounded comrades.”

Dwyer was, at the time, the youngest recipient of the VC. He was promoted to Corporal and became known as ‘The Little Corporal’. He was killed in action at Guillemont on 3rdSeptember 1916 during the Somme campaign and is buried at Flatiron Copse cemetery. His Victoria Cross is held by the Princess of Wales’ Royal Regiment Museum in Dover Castle. 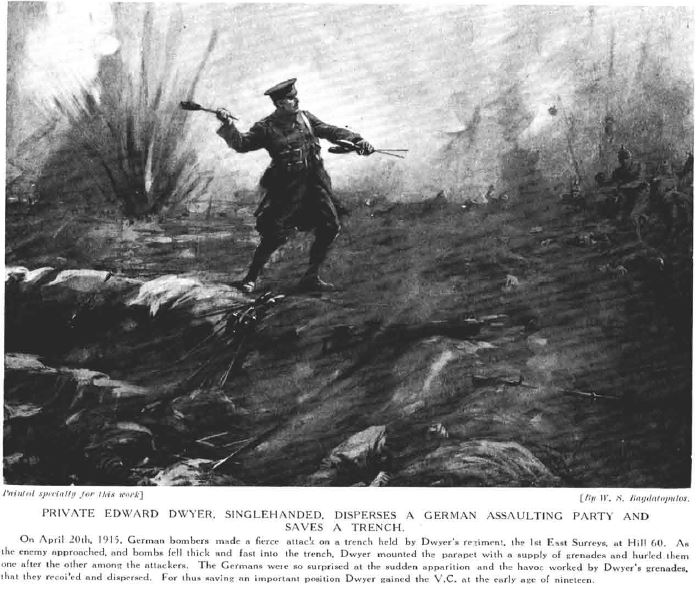 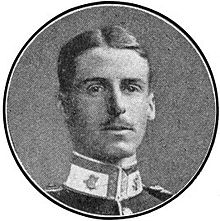 Lieutenant George Roupell, aged 23, from Tipperary. His citation reads “For most conspicuous gallantry and devotion to duty, on the 20th April 1915, when he was commanding a company of his battalion in a front trench on Hill 60, which was subjected to a most severe bombardment throughout the day, though wounded in several places, he remained at his post and led his company in repelling a strong German assault. During a lull in the bombardment he had his wounds hurriedly dressed, and then insisted on returning to his trench, which was again being subjected to a severe bombardment.

Towards evening, his company being dangerously weakened, he went back to his battalion headquarters, represented the situation to his commanding officer, and brought up reinforcements, passing backwards and forwards over ground swept by heavy fire. With these reinforcements he held his position throughout the night, and until his battalion was relieved next morning.

The young officer was one of the few survivors of his company, and showed a magnificent example of courage, devotion and tenacity, which undoubtedly inspired his men to hold out till the end.”

Roupell served throughout the war and continued his army career in the interwar period. During the Second World War he was captured and hid in France for almost two years before making it back to Britain via Spain. He ended his career with the rank of Brigadier. His Victoria Cross is held privately. 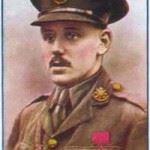 Second Lieutenant Benjamin Geary, aged 24, from Marylebone. His citation reads “For most conspicuous bravery and determination on Hill 60 near Ypres on 20th and 21stApril 1915, when he held the left crater with his platoon, some men of The Bedfordshire Regiment and a few reinforcements who came up during the evening and the night.

The crater was first exposed to a very heavy artillery fire, which broke down the defences and afterwards, throughout the night, to repeated bomb attacks which filled it with dead and wounded. Each attack, however, was repulsed, mainly owing to the splendid personal gallantry and example of Second Lieutenant Geary. At one time he used a rifle with great effect, at another threw hand grenades and exposed himself with entire disregard to danger, in order to see, by the light of flares, where the enemy were coming on. In the intervals between the attacks, he spent his whole time arranging for the ammunition supply and for reinforcements. He was severely wounded just before daybreak on 21st April.”

Geary lost the sight of one eye as a result of his wounds. He served with the Royal Flying Corps and later rejoined the 1st Battalion East Surrey Regiment on active service, and was wounded again. After the war he took Holy Orders and later emigrated to Canada. His Victoria Cross is held by the Canadian War Museum in Ottawa.