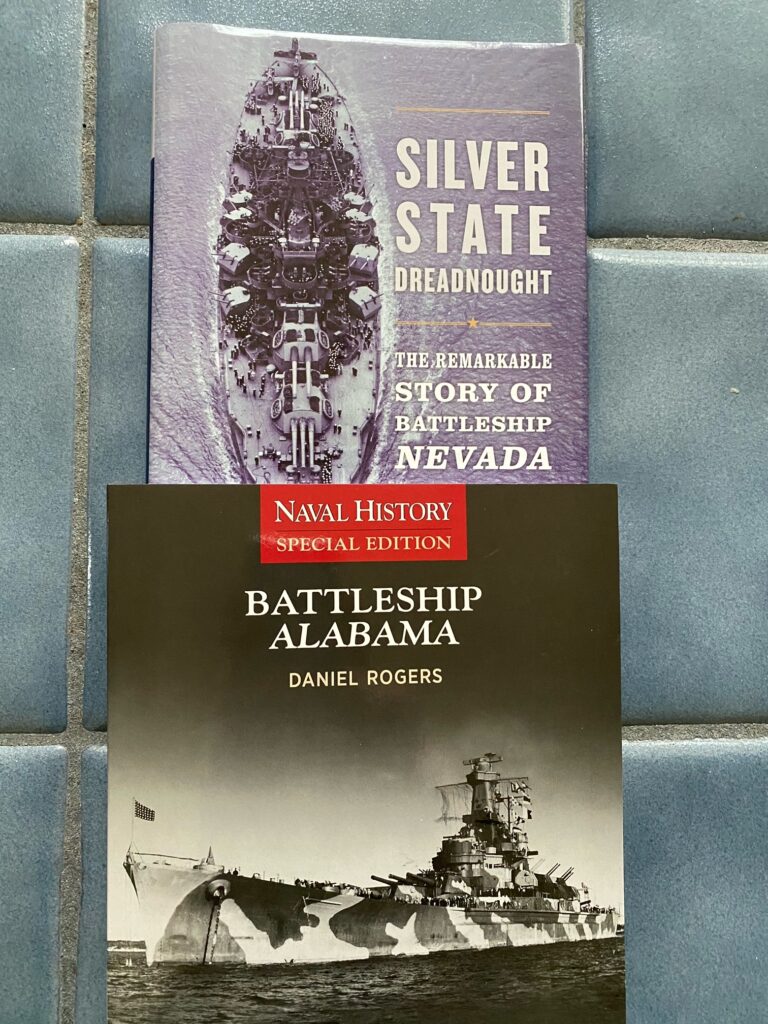 Being there . . . for laying the keel of the 35,000-ton battleship USS ALABAMA on 1 February
1940, then returning 10 November 1942 to deliver her for immediate service, and, four years, 2
months later 9 January 1947, watch as she is decommissioned. If comfortably seated, hang on
until she is opened as a museum in Mobile on 9 January 1965. Meanwhile, read naval historian
Daniel Rogers’s captivating, “BATTLESHIP ALABAMA”, which in easy, nay, brilliant prose not
only chronicles the long history of the great battleship, but also honestly narrates how the USN
misused the ALABAMA and other fast battleships in World War II; the ALABAMA’s fighting
crews and their lives aboard her in the Pacific; as well as all the ship’s combat operations and
voyages. Especially enthralling are easy to grasp designs and functions of the South Dakota
battleships and their sister ships. . . . once familiar with her history and fame, turn to board the
renown USS NEVADA (BB 36) whose heroic sea life began when skilled iron workers laid two flat
steel plates, 20 feet long, 4 feet wide, on forward-most keel blocks. NEVADA was loved by her
crews, and no less than Admiral Nimitz who considered her a favorite of his, claimed that in
return the beautiful ship loved and protected the men who loved and successfully protected
her.
HERO BATTLESHIPS USS ALABAMA AND USS NEVADA GLOW AS TWO NEW NAVAL INSTITUDE
PRESS BOOKS CHRONOLIZE THEIR BATTLE STARS, COMBAT OPERATIONS, VICTORIES, AND NEAR
MISSES

Reviewed and recommended by Don DeNevi
“BATTLESHIP ALABAMA”, by Daniel Roger. A Naval History Special Edition, U.S. Naval Institute
Press: 2022, 109 pages, 9”x11”, softcover; $29.95. Visit, www.usni.org.
“SILVER STATE DREADNOUGHT – – The Remarkable Story of Battleship NEVADA”, by Stephen M.
Younger. Naval Institute Press: 2018, 303 pages, 12”x9”, hardcover; $45. Visit, www.usni.org.
“The battleship is still the backbone
of the fleet and the bulwark of the
Nation’s sea defense, and will so
remain so long as safe navigation of
the sea for purposes of trade or
transportation is vital to success in war.”
“The sea officer must use the tools
which science creates of these the most
powerful and the most known is the
battleship.”
Prize Essay, U.S. Naval Institute, 1938
In Chapter 5 of “Battleship Modernization’s”, Naval aviator-author-professor John. T. Kuehn
writes, “As for all the world’s major navies, the interwar belief of the U.S. Navy was that the

battleship remained the final arbiter of Naval power. By the end of the treaty system in 1937
this remained the mantra of the U.S. Navy. The treaty system relied on capitol ship dominance
as the basis for success. However, by 1937 the U.S. Navy had hedged its bets, in part because it
was forced to by the treaties America had agreed to, but also because of the changing attitudes
of America’s younger Naval officers who ‘had grown up’ building and planning for everything
but battleships. . .”. See, John T. Kuehn’s brilliant “Agents of Innovation – – The General Board
and the Design of the Fleet that defeated the Japanese Navy”, pages 63-87, 2008, reprinted