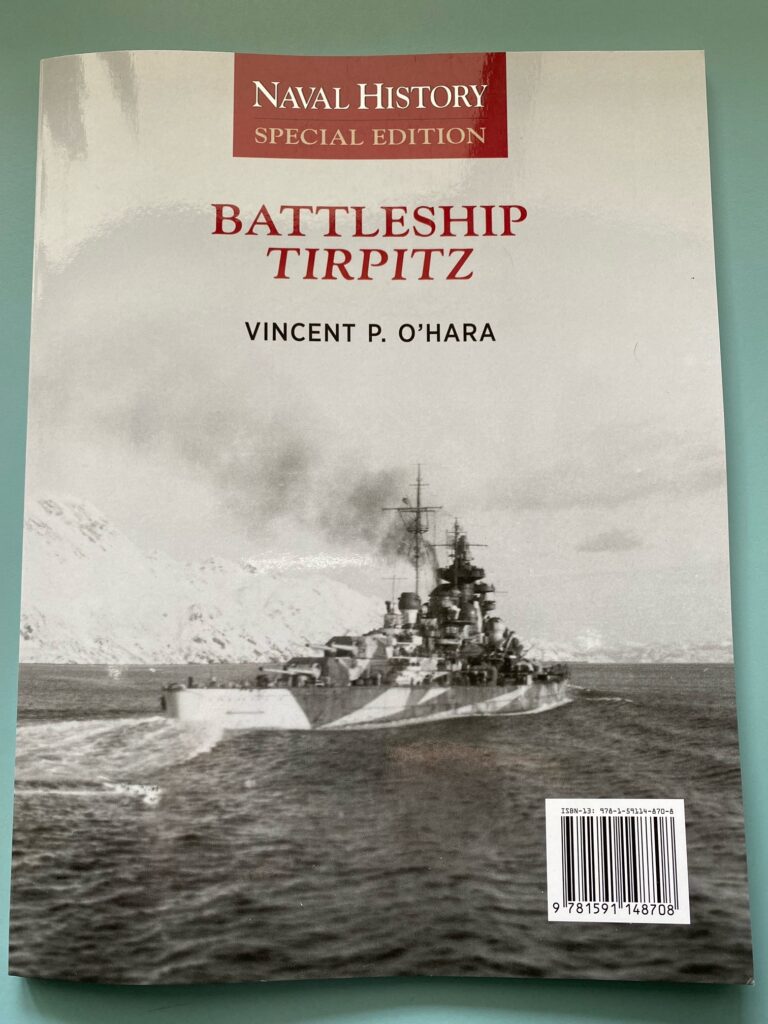 Being there . . . . for the fateful action of 12 November 1944 when 32 RAF Lancasters sunk the
pride of Hitler’s navy, after the loss of Bismarck in May of 1941, the massive 51,000-ton
German battleship TIRPITZ off Haakoy Island in Tromso Fiord on the northern Norway coast.
Despite near perfect weather, no German fighters appeared. Bravely that morning the
Lancasters flew straight in at 4600 m (15,000 ft). Clearly outlined against the glimmering sea,
Tirpitz couldn’t have been an easier target for the Royal Air Force after so many British-Allied
failures. The seamen of the heavy-gunned dreadnought, seeing the diving bombers coming
right at them, desperately released black smoke screens which somewhat successfully hid the
ship. As the 5,400 kg, or 12,000 lb, “Tallboy” bombs peppered and splashed the fiord waters
around the ship, two managed to find their way into the battleship’s foredeck, leaving the ship
helpless to sail. Hitler’s trusted Kriegsmarine Commander-in-Chief, Admiral Karl Donitz, ordered
the Tirpitz to quickly maneuvered the best way it could to the Haakoy Island coastline to serve
as a floating fortress against any Allied invasion of northern Norway. Meanwhile, the two six
foot, one-ton, “Tallboy” bombs hitting the ship produced raging flames, spirals of thick smoke,
and flying debris everywhere. The stricken Tirpitz was undoubtedly destined to sink, primarily
due to a single gaping hole torn in its side. Within minutes the magazine blew the ship up with
such force the battleship immediately began capsizing. Of the 1,000 + sailors trapped in the
hull, only 87 managed to squeeze out. Now, Germany’s two major sea threats, the Bismarck
and Tirpitz, to all the Allied surface warships were gone, and the British and American navies
were free to glide at will from Murmansk to Greenland and back to Gibraltar, snooping for any
remaining U-boats, or anything Donitz could muster without sinking.
WITH THE POWERFUL, HEAVYWEIGHT GERMAN BATTLESHIPS BISMARCK AND SCHARNHORST
THROTLLED AND SUNK AT SEA, ONE REMAINED, THE SILENT-THREAT TIRPITZ, WHICH, AS IT
TURNED OUT, REQUIRED ONLY TWO SINGLE “TALLBOY” BOMBS TO FLIP HER TO THE BOTTOM
OF A FIORD . . . .
Reviewed and recommended by Don DeNevi
“BATTLESHIP TIRPITZ”, by Vincent P. O’Hara. Naval Institute Press, Naval History-Special
Editions: 2022, 108 pages, 8’1/2” x 11’ paperback, $19.95. Visit www.usni.org/press/books.
After four years of relentless British aerial attacks, and brave, stupendous efforts, Tirpitz had
finally been put to death in the near freezing waters of an ordinary fiord. The magnificent
British Navy had deployed their entire range of air and naval assets to attack this last single
enemy ship – a ship, by the way, that had NEVER fired her guns at an enemy vessel yet exerted
a power that required an entire to offset, just as “SINK THE BISMARCK!” had been. Oh, before
that November fateful early morning action of 12 November 1944, it had fired its main guns
once, and only once, in a minor action, Operation Sizilien, against German wooden warehouse
installations in Spitzbergen on 6 September 1943. After that, she was under air constant attack,
even by British midget submarines, which severely damaged her in late September 1943.
But this cogent, surprisingly superlative synopsis of her birth, growth, development, and
contributions to German naval victories, under the guidance of Special Editions editor, Glenn

Griffith, and the narrative skill of author Vincent P. O’Hara, is more than an enticing, relishing
account of a major British victory and enormous enemy loss. It is testimony to the power of
battleships in WWII. She, more than any other Axis warship, with the exception of the Japanese
70,000-ton battleship Yamato, the largest battleship ever built, sunk on 7 April 1945 in the East
China Sea by our carrier boys, needed to die by drowning. Both giants influenced American and
British deployments and resources in ways no other enemy ships could, including the
involvement of all the combined ships of Mussolini’s Mediterranean fleet. In short, “Battleship
Tirpitz” is the story of battleships as a individual weapon systems. Author O’Hara concludes
with a sharp, penetrating historical observation: “Had Germany built nothing but submarines,
Hitler’s navy could not have protected the nation’s vital maritime traffic; Hitler could not have
projected power overseas, as in the invasion of Norway; he would have threatened British
traffic in only one dimension, and one-dimensional threats are the easiest to counter.”
Readers are encouraged to peruse other USNIP Naval History Special Editions, designed to
offer studies of the key vessels, battles, and events of WWII armed conflicts. Building upon the
expertise of excellent writers, authors, and historians, the Special Editions employ image-heavy,
magazine-style, formats that appeal to all military readers from scholars, enthusiasts, and
general buff readers alike. Visit, www.usni.org/press/books. Just a few of the titles offered are,
“Aircraft Carrier Intrepid”, “Heavy Cruiser Prinz Eugen”, “Battleship Bismarck” “Admiral
Hipper”, “Breaking the Bismarck’s Barrier”, plus a host of other neat books.