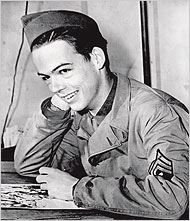 Bill Mauldin once said that the infantryman “gives more and gets less than anybody else.” He knew this from his experience on the front lines with K Company, 180th Infantry Regiment, 45th Division. Mauldin went through basic training as an infantryman and stayed with his regiment through the invasion of Sicily and the Allied campaign up the boot of Italy. The talented cartoonist succeeded in ruffling the feathers of the brass all the way up to General George Patton. In a time when American news outlets were sanitizing World War II for the folks on the home front, Bill Mauldin depicted the grim reality of war. Through the use of meticulous detail, keen observations, and sardonic wit, this baby-faced young man spoke for the masses of ordinary soldiers who had no voice of their own within the massive military machine of the United States.

Mauldin was born October 29, 1921 in the mountains of New Mexico and lived through a nomadic and impoverished childhood. His talent as an artist was evident at a young age and seeking to hone his skills and find some semblance of success in his otherwise dismal life, he attended the Chicago Academy of Arts in 1939. He returned to Phoenix, one of the many places he called home, in 1940 and as a means by which to subsist joined the Arizona National Guard. His division was dispatched to Fort Sill, Oklahoma. He was able to secure a position on the 45th Division News as a cartoonist where his drawings spoke to and for the enlisted men.

Bill’s support of the enlisted naturally depicted officers and practices within the camp as inane and was warned by his editor, Colonel Walter M. Harrison, that his irreverence had not gone unnoticed. In his defense of Mauldin, Harrison informed his superiors that “soldiers need outlets for their gripes, and if they can pick up a paper and see somebody griping for them they can go back to work feeling better.” Mauldin and Harrison continued to walk the fine line of depicting the truth of the dogfaces (infantrymen) while not pushing the brass too far. 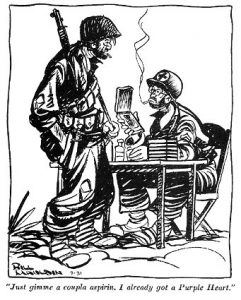 Mauldin shipped out from Virginia on June 4, 1943 as a member of the 45th Division News staff and eventually furthered his circulation by working for Stars and Stripes. Although he was not a fighting soldier, he made trips to the front and embedded himself with K Company for several days then returned to his makeshift printing press and drew what he saw. He witnessed the carnage of “Bloody Ridge” in Sicily and was wounded on the Italian mainland as German soldiers fought ferociously during their retreat north. After receiving his Purple Heart, Mauldin carried more weight with the infantrymen who were reading his feature “Start Spangled Banter,” throughout the Mediterranean Theater. The weather and conditions on the Italian front were muddy, wet, and ill-supplied. Mauldin provided the dogfaces a sense of unity and comfort as his drawings and wry captions let these men know they were not alone. One infantry veteran said of Mauldin, “…to appreciate what moments of relief Bill gave us…you had to be reading a soaking wet Stars and Stripes in a water-filled foxhole and then see one of his cartoons.”

While in Italy, Mauldin witnessed the actions of the Peninsular Base Section (PBS), which was responsible for supply distribution and policing in Naples. More supplies were stolen and sold on the black market than were delivered to front line soldiers. What Bill saw as equally bad was the manner in which infantrymen with a four day pass for R and R in Naples were treated. The PBS brass were favored with an abundance of women, alcohol, and hotels while the dogfaces were housed in rest centers and kept away from the recreation they so desperately sought. Mauldin drew scenes from Naples that depicted enlisted men and line officers being denied access to bars and hotels. He drew these men as dirty, unshaven, and exhausted while the members of the PBS were clean, healthy, and smiling. Brass, including Patton, were furious with this series of drawings and even went so far as to claim Mauldin was inciting mutiny. General Theodore Roosevelt, Jr. came to Bill’s defense, positing that Mauldin “might be preventing it [mutiny] by blowing off a little steam for the boys.” That is exactly how “the boys” saw Bill’s work. Mauldin perfectly depicted the reality and deprivations suffered by the underappreciated infantrymen.

As the war raged into 1944, each military branch recognized the importance of publicity in the States. Each branch had their own public relations personnel and Mauldin assumed that role for the infantry. In Hollywood, stars such as Cary Grant, Humphrey Bogart, and John Garfield were acting as heroes for the Navy, Marines, and Army Air Corps. The infantrymen were far less romantic in their duties and therefore did not fit the Hollywood perception of a hero. On February 29, 1944, Mauldin’s immortal “Willie and Joe” were born, giving life to the seemingly forgotten dogface.

By sketching just enough detail so as the foot soldiers knew what he meant, he was able to maintain a sense of dignity for these men without antagonizing the brass to a greater degree than he already had. Not only did Willie and Joe perfectly depict the suffering of the dogfaces, they also conveyed the sense of extreme comradery and loyalty these men felt toward one another. In one telling cartoon, Willie and Joe are shown sitting in a water filled trench. Willie says that in return for saving his life earlier, he would give Joe his last pair of dry socks. Those were the things that mattered to infantrymen. Everyday activities that men who were not on the front lines could not possibly understand: trying to dig a foxhole through frozen ground; deciding whether or not to defecate in the foxhole or risk getting shot while climbing out; taking a bath in a muddy hole. These were the daily events of the dogface and through Mauldin’s work these men were able to endure one more day because they knew someone understood. 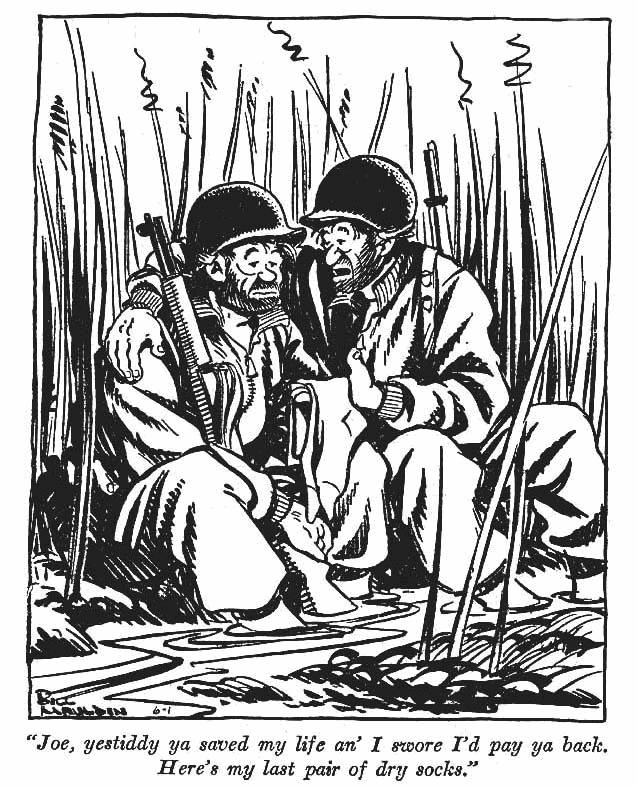 When Bill Mauldin was in Rome in 1944, he was working on sketches for his book, Up Front. He questioned whether his drawing were too extreme in their grimness. To resolve these doubts, he travelled to a battalion aid station near Bologna and spent several days witnessing the conditions under which the medics and surgeons performed and the condition of the wounded men who were brought in for help. He returned to Rome secure in the knowledge that his drawings perhaps were not harsh enough.

Although he struggled with the brass and had to tread carefully in order to keep his work in publication, in 1945 Bill Mauldin won the Pulitzer Prize for “distinguished service as a cartoonist,” and in the end had the support of General Eisenhower. John Pellegren, an enlisted man and veteran of Omaha Beach, said of Mauldin: “He was one of us. He supported the enlisted man. I was an enlisted man. Period. He was our champion, Mauldin was.”

More than any of the accolades he received, Bill was the most satisfied with the knowledge that he had advocated for the dogface.