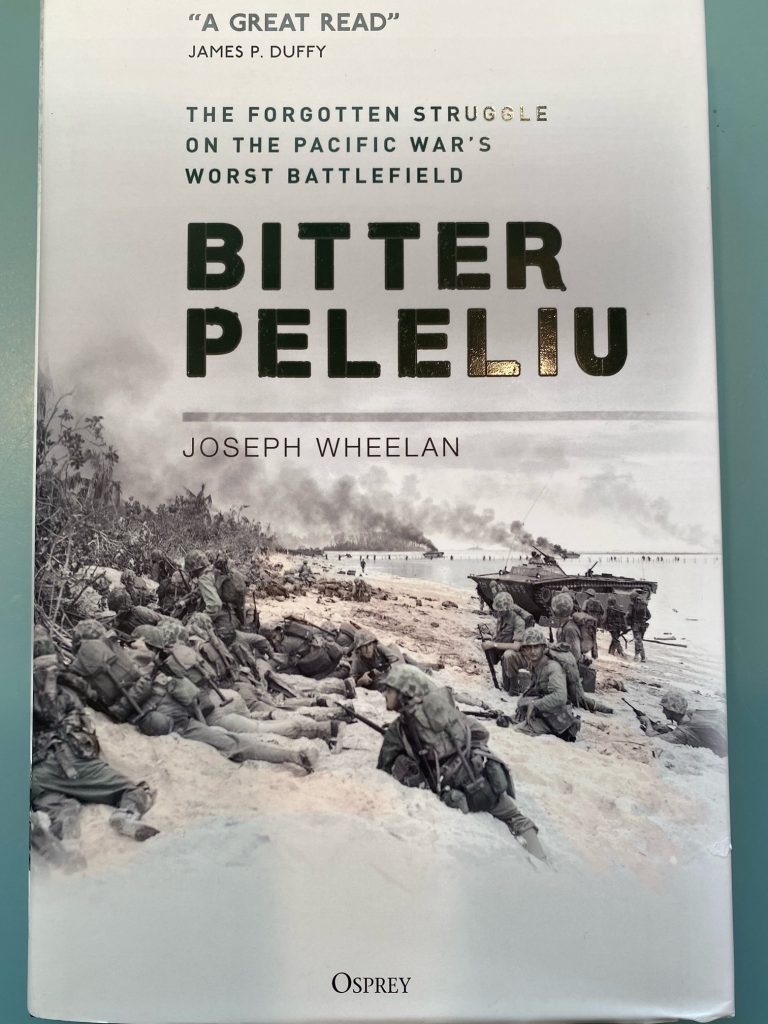 Being there . . . . in the Pacific for Operation Stalemate, the 74-day campaign to capture tiny,
2,000 yard wide, Peleliu, and the modest Palau Islands of Ngesebus and Kongauru in September
of 1944, while enduring the fates of 38.5% of the attacking battle-hardened 28,000 US Marines
and Army soldiers resulting in 10,786 casualties, 2,336 Americans killed while killing 14,338
Japanese. Without breaking down, or perishing in the muck yourself, watch day after day how
our resolute, brave boys battled in silence, and, when not fingering triggers, bearing with
patience the hot tropical humidity; odors of decaying enemy dead, their exposed bones
protruding from the sand; the never-ending stench of night land crabs by the thousands
feasting on the days vomit; the teeming daily hot rain arriving punctually at 10:00am and
4:00pm; negotiating the razorblade sharp coral between boat and beach; the maggot-infested
rotting of everything, whether wood, leather, canvas, or flesh, and the ever-present dropping of
heavy coconuts that can crush. Only Pavuvu Island 65 nautical miles northwest of Guadalcanal
was worse . . . .
TELL ME, PACIFIC WAR BUFF, WAS SUCH A COSTLY OPERATION WORTH IT? THANKS ONCE
AGAIN TO OSPREY PUBLISHING, AKIN TO CASEMATE, AND AUTHOR J. WHEELAN, WE NOW
HAVE THE ANSWER (the same as it was in 1946) – GIVE YOURSELF THIS GREAT BOOK AS A
XMAS PRESENT! WHY NOT? DON’T YOU HONESTLY AND FAIRLY BELIEVE YOU OWE YOU ONE?
Why Peleliu? A worthless island costing us 2,336 of ours killed in the hot sand? Are you
kidding? Many people, mostly WWII enthusiasts, bed and arm-chair readers, amateur war-map
strategists, the families, especially aging grandchildren, of the perished Marines and soldiers,
are still asking, “Was it really that necessary? Why couldn’t we have just bypassed Peleliu and
its brother, Angaur, and simply bombed the hell out of them every day until the end of the war?
The A-bomb was on its way, and one would have been enough, if they hadn’t surrender.”
Reviewed and highly recommended by Don DeNevi
“BITTER PELELIU – – The Forgotten Struggle on the Pacific War’s Worst Battlefield”, by Joseph
Wheelan. Osprey Publishing, Bloomsbury Publishing: 336 pages, 2022, hc; $30.00. Visit,
www.ospreypublishing.com, or, E-mail: [email protected]
Why, why, why? – – everyone familiar with the Pacific War was asking after the Japanese
surrender – until one exasperated apologist exploded, “Why didn’t we just sit back after Pearl
Harbor and wait for the Atomic Bomb to be invented, then ship a bunch of ‘em into Japan by
parcel post?”
The Marine Corps has never had an official answer. “Ours,” wrote Major, USMCR, Frank O.
Hough in his impeccable, at the time, 1947 “The Island War – – The United States Marine Corps
In the Pacific”, “is not to reason why; ours is but to carry out the assignments handed us by the
Joint Chiefs of Staff, who, presumably, are better qualified in grand strategy than politicians,
newspapermen, and the Great Amalgamated Order of Armchair Strategists and Monday
Morning Quarterbacks”.

In “Bitter Peleliu, author Joseph Wheelan, who wrote the eminently well written, “Midnight
in the Pacific” (2017) and “Bloody Okinawa” (2020), “My book tries to reveal the full agony,
pain, and losses during the two and a half months it took to capture Peleliu. Due to pre-invasion
over-confidence on the part of commanders, 30 of the 36 news correspondents accredited for
the campaign had left prior to its D-Day. This reduced presence has never garnered the type of
attention the struggle for the islands deserves.”
In short, in late 1944 as a precursor to the invasion of the Philippines, U.S. military analysts
decided to seize Peleliu, a diminutive patch of yellow-white sand and its slightly larger brother,
Anguar. Regardless of our human cost, which most expected to be tinier than for the clump of
sand next door, the priceless Peleliu airfields had to be captured since they posed major threats
to our invading forces sailing for the northern beaches of Luzon and other Philippine islands.
Only Admiral William “Bull” Halsey, commander of the Third Fleet, objected, arguing time and
again that “the damn Palaus Islands should be by-passed. The cost is too high for virtually
nothing. Let our air force bombers handle those short fighter airfields.”
Author Joseph Wheelan explores the dramatic story of the resulting campaign and its
strategic failings. He details how our intelligence officers failed to detect the complex network
of caves, tunnels, and pillboxes hidden inside the island’s coral ridges. More importantly, they
did not discern — nor could they before it happened – that the defense of Peleliu would
represent a tectonic shift in Japanese strategy. No more contesting enemy landings on the
landing beaches and their edges, no more wild banzai attacks. Henceforth, heavy-burdened
invaders would be raked on the beaches by mortar and artillery fire. Then, as the Americans
penetrated deeper into the Japanese defensive systems, they would find themselves on soft
sand ground carefully prepared for the express purpose of killing as many Marines and Army
soldiers as possible.