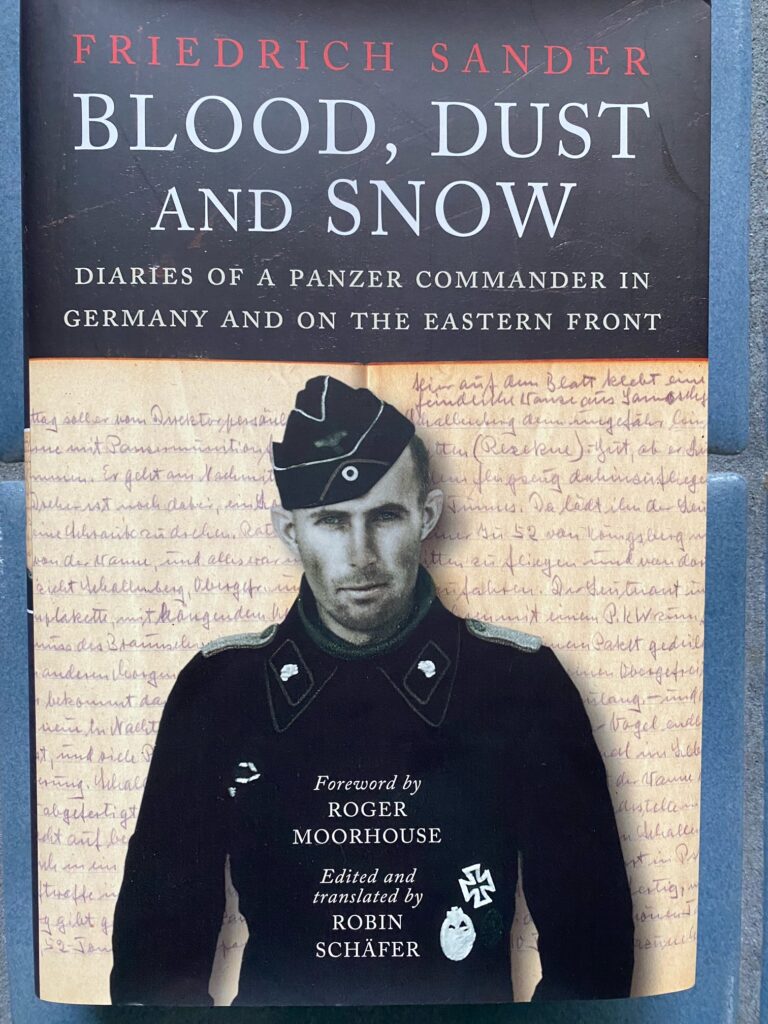 Being there . . . . at 02.30 am, 22 June 1941 alongside Oberleutnant Friedrich Wilhelm Sander
serving with the men of 5 th Company, Panzer-Regiment 11, during the opening battery salvoes
and artillery barrages of Operation “Barbarossa”, the Germany’s surprise attack on the USSR.
Listen to the officer’s comments as the immense German and satellite armies launch the
greatest invasion in world history, then successfully unleash and roll their new tanks and elite
troops along a 1,500-mile front on its western frontier. Watch dictator Hitler, frustrated by
Britain’s Royal Air Force denying him the skies over its islands, as well as the English Channel to
land his well-equipped armies along its coasts, impatiently pivot his vast armadas of ships,
aircraft, tanks, and infantry, to strike eastwards, like a modern-day Napoleon, across the
boundless plains of Russia. Little did he know that stupid decision would cost him not only
World War II, but also his life by suicide. Now, via a rare combat diary, us eager World War II
buffs are allowed to join the invading Panzermanns, most of whom already steered their Skoda
and Panzer 35 (t)s through Poland and France, within their turrets, or atop them, as they rapidly
advance, engage, attack or are attacked, and survive.
ON THE SECOND DAY OF SUMMER, 1941, ALTHOUGH THE ALLIES WERE RELIEVED THE FUHRER
CHANGED HIS MIND AND HEADED TOWARD MOSCOW INSTEAD OF LONDON, THEY HELD THEIR
BREATHS. IF HITLER’S INEXORABLE FORCES ADVANCED IRRESISTIBLY, WOULD IT BE A TELLTALE,
ANTICIPATORY SIGN THAT THE THIRD REICH WAS WELL ON ITS WAY TO WINNING WW II? IF SO,
WHAT THEN? GERMAN THE UNIVERSAL LANGUAGE?
Reviewed and highly recommended by Don DeNevi
“BLOOD, DUST AND SNOW – – Diaries of a Panzer Commander in Germany and on the Eastern
Front”, by Friedrich Sander, Foreword by Roger Moorhouse, Edited and translated by Robin
Schafer. Greenhill Books, c/o Pen & Sword Books Ltd., Dist. by Casemate Publishers: 2022, 432
pages, 6 ½” x 9 ½”, hardcover. $37.95. Visit, www.greenhillsbooks.com, or
www.casematepublishers.com.
Readers, for the New Year, we’ve lucked out by being invited to witness one of the five
bloodiest combat theatres of the Second World War. Young Oberleutnant Sander experienced
his own bloodshed, first-hand, while serving with the 11 th Panzer-Regiment in two major battles
on the Eastern Front, Operations Barbarossa and Winter Storm. Intelligently, he recorded his
experiences of those campaigns in amazingly detailed diaries recently discovered. They cover
the time frame from April 1938 to December 1943, and just recently were translated by
historian and author, Robin Schafer.
Written during the heavy fighting, the diaries offer an honest assessment of the war on the
Eastern Front, providing not only an insight into the mind of a surprisingly young and highly
polished pro-Hitler officer, but also an intimate glimpse into the close-knit community of a
veteran German Panzer crew. “In contrast to the vast majority of German soldiers’ memoirs,
autobiographies, and diaries published after the end of the war, Sander’s diaries are not
political, or agenda driven. They were not written or edited to fit a social Zeitgeist, or to appeal

to the tastes of a certain kind of audience,” writes Robin in a brilliant Introduction. No holds are
barred in terms of honest and frank perspectives.
Sander’s diaries offer a totally genuine and unfiltered glimpse into the daily thoughts of an
officer in the tough Panzerwaffe during the first half of the war, and, as such, are unique.
Supported by more than 100 candid photographs, “BLOOD, DUST AND SNOW” will be of great
interest to the WWII researcher, historian, librarian, and enthusiastic buff anxious to experience
what it was really like facing the fierce, resolute Soviets defending their country, fighting to the
last man (read the chapters dealing with Stalingrad). Plus, who better to endorse the book than
the highly respected Roger Moorhouse, author of “The Devil’s Alliance”. Equally impressive is
the background of editor Robin Schafer, a renowned German military historian, writer, and
documentary producer of British WWI and WWII interviews and documentaries for
international television companies.
Barely into 2023, it is certain to be one of the five best World War II books of the year – – a
book all military reviewers will surely recommend to their readers
for purchase and addition to personal libraries.