One of the best memoirs of a German soldier I have ever read. The author provides a detailed accounting of the Brandenburgers missions and daring exploits in Eastern Europe, Greece, The Russian Front and various parts of the German Reich during World War II. 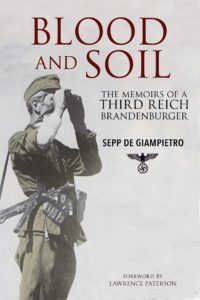 Sepp De Giampietro grew up in South Tyrol Italy and yearned to be a German and be associated with the Germany throughout his young adult life. The South Tyrolean people were never accepted into the Reich but that did not prevent them from volunteering for the German Wehrmacht. Although the Germans high command did not recognize the South Tyroleans as part of German they certainly understood the importance of incorporating these young men into their special forces. The farmers had the unique skills of adapting, overcoming, and acquiring new skills at a rapid pace that were key attributes of what was needed for the Brandenburgers. AS Sepp tells his stories of adventures in Germany, Greece, Eastern Europe and the Russian front he provides a rare glimpse into the life and times of a special forces soldier in the German Army. More often than not these soldiers would don the uniforms of their enemy and assault key bridges ahead of the main forces of Infantry and Tanks. Sepp’s larger stories cover the June 1941 seizure of the Duna bridges near Dunaburg and the daring assault at Bataisk where half of his unit was killed.

An eye opening memoir from a Brandenburger that served in the front lines for Hitler’s special Forces. Sepp De Giampietro captures the essences of what it was like to serve as one of the elite soldiers of the German war machine during World War II.

This book is available on Amazon.com (US), Amazon.co.uk (UK) and Greenhill Publishing.