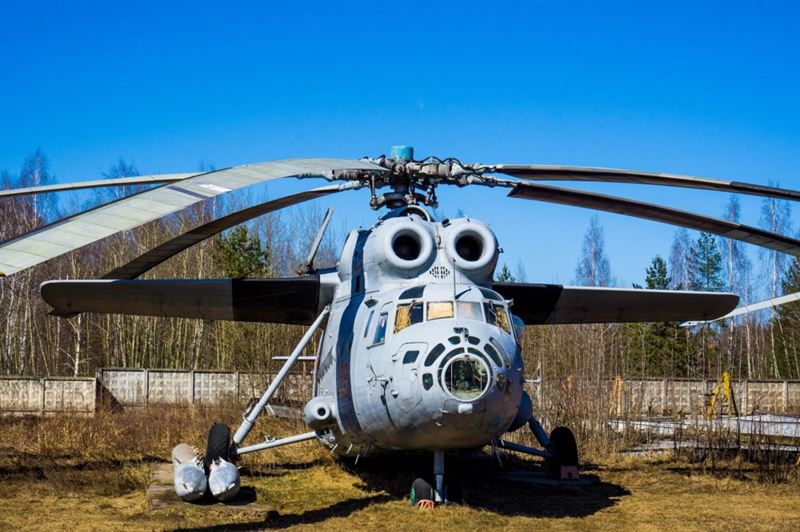 Air command point based on the Mi-6. 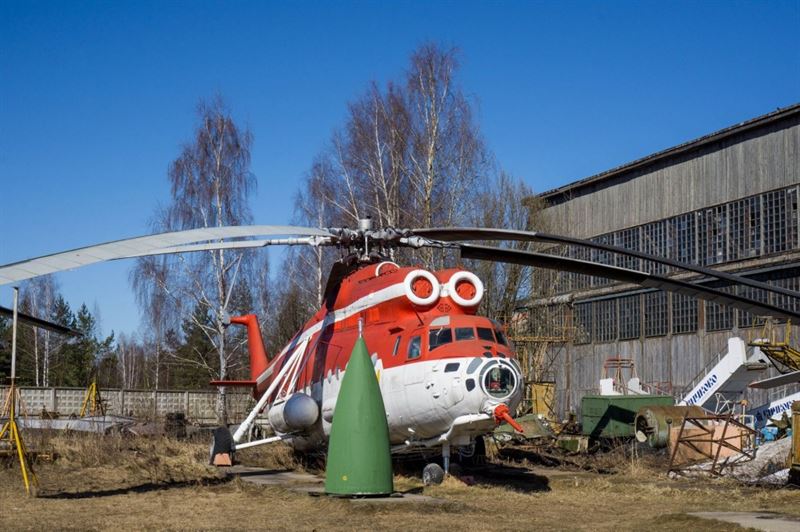 The Mil Mi-26 is a heavy transport helicopter. Operated by both military and civilian operators, it is the largest and most powerful helicopter to have gone into series production. 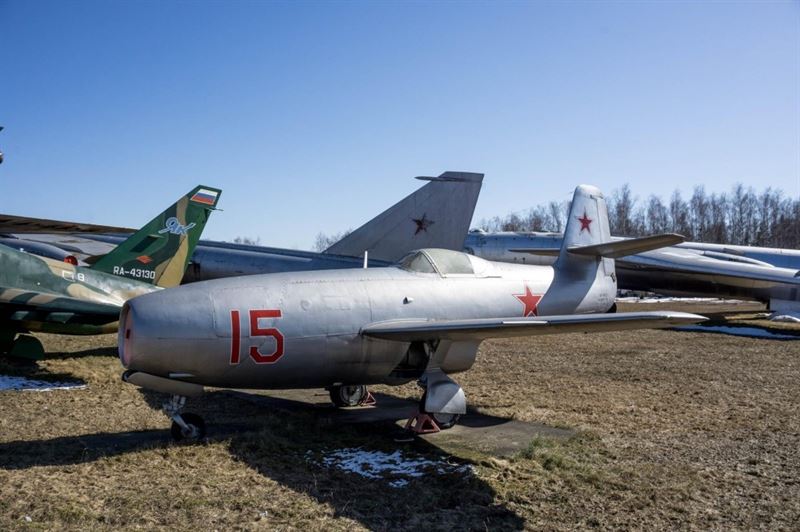 The Tupolev Tu-95MS is a large, four-engine turboprop-powered strategic bomber and missile platform. First flown in 1952, the Tu-95 entered service with the Soviet Union in 1956 and is expected to serve the Russian Air Force until at least 2040.

Mig-29KVP (prototype). The Mikoyan MiG-29 is a twin-engine jet fighter aircraft designed in the Soviet Union. Developed by the Mikoyan design bureau as an air superiority fighter during the 1970s, the MiG-29, along with the larger Sukhoi Su-27, was developed to counter new American fighters such as the McDonnell Douglas F-15 Eagle, and the General Dynamics F-16 Fighting Falcon. The MiG-29 entered service with the Soviet Air Force in 1982.

The Antonov An-12  is a four-engined turboprop transport aircraft designed in the Soviet Union. It is the military version of the Antonov An-10 and has many variants. As you see, there is a cannon next to it.

The Antonov An-22 “Antei” is a heavy military transport aircraft designed by the Antonov Design Bureau in the Soviet Union. Powered by four turboprop engines each driving a pair of contra-rotating propellers, the design was the first Soviet wide-body aircraft and remains the world’s largest turboprop-powered aircraft to date. The An-22 first appeared publicly outside the Soviet Union at the 1965 Paris Air Show. Since then, the model has seen extensive use in major military and humanitarian airlifts for the Soviet Union.

The very interesting exhibit is situated behind An-22. The Bartini Beriev VVA-14 Vertikal`no-Vzletayuschaya Amphibia (vertical take-off amphibious aircraft) was a wing-in-ground-effect aircraft developed in the Soviet Union during the 1970s. Designed to be able to take off from the water and fly at high speed over long distances, it was to make true flights at high altitude, but also have the capability of “flying” efficiently just above the sea surface, using aerodynamic ground effect. The VVA-14 was designed by Italian-born designer Robert Bartini in answer to a perceived requirement to destroy United States Navy Polaris missile submarines.

After Bartini’s death in 1974, the project slowed and eventually drew to a close, the aircraft having conducted 107 flights, with a total flight time of 103 hours. The only remaining VVA-14, was retired to this museum in 1987. The aircraft still resides in a dismantled state.

The Tupolev Tu-114 Rossiya (Russia) was a turboprop-powered long-range airliner designed by the Tupolev design bureau and built in the USSR from May 1955.

The Beriev Be-12 Chayka (Seagull) is a Soviet turboprop-powered amphibious aircraft designed for anti-submarine and maritime patrol duties.

The Tupolev Tu-22M  is a supersonic, variable-sweep wing, long-range strategic and maritime strike bomber developed by the Tupolev Design Bureau. During the Cold War, the Tu-22M was operated by the Soviet Air Force  in a strategic bombing role, and by the Soviet Naval Aviation in a long-range maritime anti-shipping role. Significant numbers remain in service with the Russian Air Force.

The Tupolev Tu-144 is a retired jet airliner and commercial supersonic transport aircraft (SST). It is one of only two SSTs to enter commercial service, the other being the Anglo-French Concorde. The design was a product of the Tupolev design bureau, headed by Alexei Tupolev, of the Soviet Union and manufactured by the Voronezh Aircraft Production Association in Voronezh, Russia. It conducted 55 passenger service flights, at an average service altitude of 16,000 metres (52,000 ft) and cruised at a speed of around 2,000 kilometres per hour.

The prototype first flew on 31 December 1968 near Moscow, two months before the first flight of the Concorde. The Tu-144 first went supersonic on 5 June 1969, and on 26 May 1970 became the first commercial transport to exceed Mach 2. A Tu-144 crashed in 1973 at the Paris Air Show, delaying its further development. The aircraft was introduced into passenger service on 1 November 1977, almost two years after Concorde, because of budget restrictions. In May 1978, another Tu-144 (an improved version, named Tu-144D) crashed on a test flight while being delivered, and the passenger fleet was permanently grounded after only 55 scheduled flights. The aircraft remained in use as a cargo aircraft until 1983, by which point a total of 102 commercial flights had been completed. The Tu-144 was later used by the Soviet space program to train pilots of the Buran spacecraft, and by NASA for supersonic research.

The Mikoyan MiG-31 is a supersonic interceptor aircraft developed for use by the Soviet Air Forces. The aircraft was designed by the Mikoyan design bureau as a replacement for the earlier MiG-25 “Foxbat”; the MiG-31 is based on, and shares design elements with the MiG-25. It continues to be operated by the Russian Air Force and the Kazakhstan Air Force following the end of the Cold War and the collapse of the Soviet Union in late 1991.

The Tupolev Tu-141 Strizh (Swift) with a launcher. It was a Soviet reconnaissance drone in service with the Soviet Red Army and with a number of its Warsaw Pact and Middle East allies during the late 1970s and 1980s.

The Mikoyan-Gurevich MiG-105 part of a program known as the Spiral (aerospace system), was a manned test vehicle to explore low-speed handling and landing. It was a visible result of a Soviet project to create an orbital spaceplane. This was originally conceived in response to the American Boeing X-20 Dyna-Soar military space project and may have been influenced by contemporary manned lifting body research being conducted by NASA’s Flight Research Center in California, USA. The MiG 105 was nicknamed “Lapot” (bast shoe), for the shape of its nose.

The Tupolev Tu-95N is a large, four-engine turboprop-powered strategic bomber and missile platform. First flown in 1952, the Tu-95 entered service with the Soviet Union in 1956 and is expected to serve the Russian Air Force until at least 2040. A development of the bomber for maritime patrol is designated Tu-142, while a passenger airliner derivative was called Tu-114.

The Lavochkin La-250 “Anakonda” was a high-altitude interceptor aircraft prototype developed in the Soviet Union in the 1950s. Its nickname anaconda was “invented” during the flight test and referred to both the elongated body shape as well as the relatively critical flight characteristics of the machine.

Test flights of the five prototypes were plagued by crashes caused by failures of the hydraulic boost system and landing gear as well as poor forward visibility (the latter was corrected with fitting of a new slightly “drooped” nose). La-250 made a single test flight in 1956, only 6 flights in 1957, and a mere 14 flights in 1958. Frustrated by the lack of progress, Soviet Air Force stopped all work on the aircraft  in 1959. Lessons learned with La-250 were used to develop new interceptor system requirements which led to the Tupolev Tu-28 interceptor.

The Yakovlev Yak-36 was a Soviet technology demonstrator for a VTOL combat aircraft.

The Yakovlev Yak-38 was the Soviet Naval Aviation’s only operational VTOL strike fighter aircraft, in addition to being its first operational carrier-based fixed-wing aircraft. It was developed specifically for, and served almost exclusively on, the Kiev-class aircraft carriers.

The Sukhoi Su-25 Grach (rook) is a single-seat, twin-engine jet aircraft developed in the Soviet Union by Sukhoi. It was designed to provide close air support for the Soviet Ground Forces. The first prototype made its maiden flight on 22 February 1975. After testing, the aircraft went into series production in 1978 at Tbilisi in the Georgian Soviet Socialist Republic.

The type has seen combat in several conflicts during its more than 30 years in service. It was heavily involved in the Soviet war in Afghanistan, flying counter-insurgency missions against the Mujahideen. The Iraqi Air Force employed Su-25s against Iran during the 1980–88 Iran–Iraq War. Most were later destroyed or flown to Iran in the 1991 Persian Gulf War. The Georgian Air Force used Su-25s during the Abkhazia War from 1992 to 1993. The Macedonian Air Force used Su-25s against Albanian insurgents in the 2001 Macedonia conflict and, in 2008, Georgia and Russia both used Su-25s in the Russo-Georgian War. African states, including the Ivory Coast, Chad, and Sudan have used the Su-25 in local insurgencies and civil wars. Recently the Su-25 has seen service in the Russian intervention in the Syrian Civil War.

One of a few foreign aircrafts here. American bomber B-25 Mitchell.

The Myasishchev M-50 was a Soviet prototype four-jet engine supersonic strategic bomber, which never attained service. Only one flight-worthy prototype was built, which has first flown in October 1959. The M-50 was constructed by the Myasishchev design bureau. Like most of the early 1960’s supersonic strategic bomber projects, the M-50 program was terminated due to the development of the intercontinental ballistic missiles and the priority assigned to the Soviet space program.

The Yakovlev Yak-141 , also known as the Yak-41, was a Soviet supersonic vertical takeoff/landing (VTOL) fighter aircraft designed by Yakovlev.