On one hand, the collection of the Central Air Force Museum is really impressive, it includes for the most part aircraft and helicopters that were produced in the Soviet union as well as unique machinery. At the same time, the condition of some exhibits is poor. The museum had serious problems with financing in 1990’s, this situation became just a little bit better since recently. What I can say is that the Central Air Force Museum is definite worth visiting.

You start the museum in the entry hall where the ticket office is located. Here they have a special hangar with World War II aircraft.

Lavotsjkin La-7, designed by Lavotsjkin. One of the best Soviet aces, Ivan Kozjedoeb, flew with this aircraft. It was also the sole Soviet fighter that shot down a Messerschmit Me 262 above Germany in 1945.

The Ilyushin Il-8, a Soviet ground-attack aircraft developed by Ilyushin.

Polikarpov I-5 used as a fighter aircraft in the 1930’s and afterwards used a training aircraft. After Germany invaded the Soviet union, they added four machine guns and bomb racks so they could be used as light ground-attack aircraft and night bombers in 1941 but were then replaced by the IL-2.

Let us go outside! 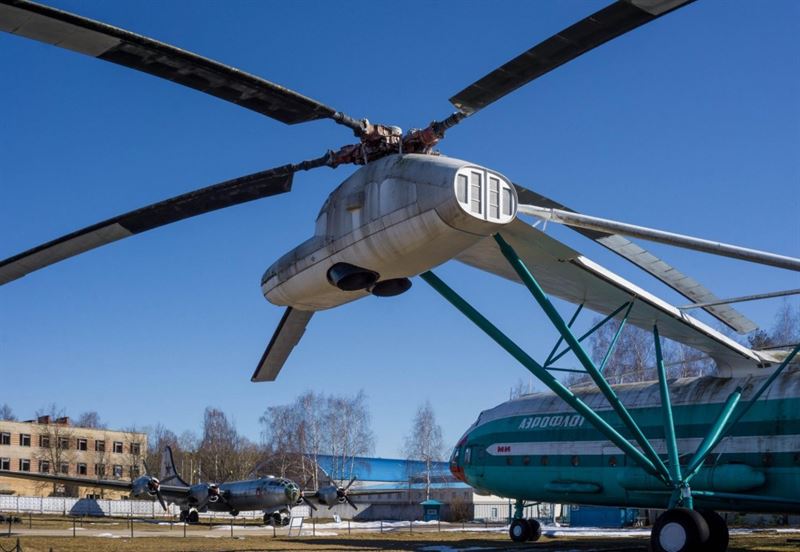 The first exhibit you’ll see in the open-air area of the museum, is the helicopter Mil V-12 (NATO name “Homer”), the largest helicopter ever built. It’s the only helicopter of this model available to the public. Another Mil V-12 is located at the Moscow helicopter plant in Tomilino.

Before you think, “why is there an US B-29 bomber situated in collection of the museum about Soviet aviation?”, it’s actually the Soviet strategic bomber Tupolev Tu-4. And yes, it’s a reverse-engineered copy of the American-made Boeing B-29 Superfortress.

Toward the end of World War II, the Soviet Union saw the need for a strategic bombing capability similar to that of the United States Army Air Forces. The Soviet VVS air arm had the locally designed Petlyakov Pe-8, a four-engined heavy bomber, in service at the start of the war, but only 93 had been built by the end of the war and the type had become obsolete. The U.S. regularly conducted bombing raids on Japan, from distant Pacific forward bases using the B-29 Superfortress. Joseph Stalin ordered the development of a comparable bomber.

The U.S. refused twice to supply the Soviet Union with B-29’s under Lend Lease. However, on four occasions during 1944, individual B-29;s made emergency landings in Soviet territory and one crashed after the crew bailed out. In accordance with the Soviet–Japanese Neutrality Pact, the Soviets were neutral in the Pacific War and the bombers were therefore interned and kept by the Soviets. Despite Soviet neutrality, the U.S. demanded the return of the bombers, but the Soviets refused.

Three repairable B-29’s were flown to Moscow and delivered to the Tupolev OKB. One B-29 was dismantled, the second was used for flight tests and training, and the third one was left as a standard for cross-reference. Stalin asked aircraft designer Tupolev to clone the Superfortress as soon as possible instead of continuing with his own comparable ANT-64/Tu-10. The reverse-engineering effort involved 900 factories and research institutes, who finished the design work during the first year; 105,000 drawings were made. By the end of the second year, the Soviet industry was to produce 20 copies of the aircraft, ready for State acceptance trials. The Tu-4 first flew on 19 May 1947, piloted by test pilot Nikolai Rybko. Serial production started immediately, and the type entered large-scale service in 1949.

The first flying copy of the Tu-22M! With him began the story of the entire line of M.

The Tupolev Tu-16 (NATO reporting name: Badger) was a twin-engined jet strategic heavy bomber used by the Soviet Union. It has flown for more than 60 years and the Chinese licence-built Xian H-6 remains in service with the People’s Liberation Army Air Force. 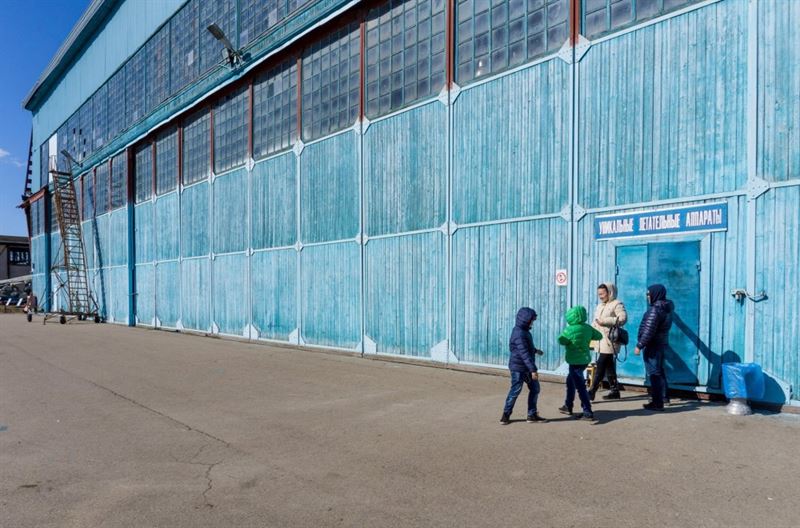 The hangar with unique flying machines. Remained from the time when it was military airport. At least, I think so, because the hangar looks to be old.

There are three small planes on the right side f the hangar. The Antonov An-14 Pchelka (“Little Bee”) is a Soviet utility aircraft which was first flown on 15 March 1958. Serial production started in 1966, and about 300 examples were built by the time production ended in 1972. The An-14 failed to replace the more successful An-2 biplane, which was manufactured until 1990 (the An-2 is still manufactured on special order). With very stable flight characteristics, the An-14 could be flown by most pilots after a few hours of basic training. A small number of An-14s are still in airworthy condition.

The PZL M-15 was a jet-powered biplane manufactured by WSK PZL-Mielec in Poland for Soviet agricultural aviation. For its strange looks and noisy engine, it was nicknamed Belphegor. In demonology, Belphegor is a demon, and one of the seven princes of Hell, who helps people make discoveries. He seduces people by suggesting to them ingenious inventions that will make them rich.

It’s time to look inside the hangar. It isn’t sealed from birds, so there are many jackdaws into. It’s necessary to be careful, because their shit fall down sometimes.

Voisin LAS. These machines were frequently used on the Eastern front during World War 1. In the summer of 1914, the Moscow plant “Dux” has begun production of “LA Voisin”, and later “LAS” by French documentation. Manufacturing of this machine came to the end in 1917. In total, according to various estimates, from 300 to 350 machines were manufactured. In addition 153 were built by a plant of V. A. Lebedev in St. Petersburg and more than 10 were built by workshops of F. F. Tereshchenko near Kiev. Thus, relatively simple, technological and undemanding “Voisin” became Russia’s most massive produced airplane of the First World war.

Mig-15 BIS. When I edited this photo, I noticed the inscription “Rauchen verboten!” (smoking is prohibited in German) on the wood behind the fighter. Why is there a German inscription here? Maybe this hangar was built by Germans?

The Sikorsky Ilya Muromets were a class of Russian pre-World War I large four-engine commercial airliners and military heavy bombers used during World War I by the Russian Empire. The aircraft series was named after Ilya Muromets, a hero from Slavic mythology. The series was based on the Russky Vityaz or Le Grand, the world’s first four-engined aircraft, designed by Igor Sikorsky. The Ilya Muromets aircraft as it appeared in 1913 was a revolutionary design, intended for commercial service with its spacious fuselage incorporating a passenger saloon and washroom on board. During World War I, it became the first four-engine bomber to equip a dedicated strategic bombing unit.

After the October revolution, Sikorsky emigrated to the United States. He founded the Sikorsky Aircraft Corporation in 1923, and developed the first of Pan American Airways’ ocean-conquering flying boats in the 1930’s. In 1939, Sikorsky designed and flew the Vought-Sikorsky VS-300, the first viable American helicopter, which pioneered the rotor configuration used by most helicopters today. Sikorsky modified the design into the Sikorsky R-4, which became the world’s first mass-produced helicopter in 1942.

“Sever-2” – snowmobile, developed in 1959 by the Kamov design Bureau. Produced at the aviation plant “Progress” (in the town Arseniev, Primorsky Krai).

Turbolyot, the name of the stand to test the engine and gas-jet control system for vertical takeoff and landing aircraft (VHF). Journalists gave him the nickname “Flying table”.

The Lavochkin La-15 was an early Soviet jet fighter. The aircraft on the photo is preparing for restoration now. The restoration will be paid by a private company.

The Mil V-7 was an unusual experimental four-seat helicopter. Four examples of this helicopter were built in the late 1950’s, but only one is known to have flown, with only the pilot aboard.

The BOR-5 is a 1:8 sized test flight vehicle, used to study the main aerodynamic, thermal, acoustic and stability characteristics of the Buran. It follows upon the BOR-4 reentry test vehicle. It was put into a suborbital trajectory by a K65M-RB5 rocket launched from Kapustin Yar, near Volga, towards Lake Balkhash. Buran was a Soviet spaceship, it was the only Soviet reusable spacecraft to be launched into space.

Full-size copy of the ANT-25. The Tupolev ANT-25 was a Soviet long-range experimental aircraft which was also tried as a bomber. First constructed in 1933, it was used by the Soviet Union for a number of record-breaking flights.

The Bereznyak-Isayev BI-1 was a Soviet short-range interceptor developed during the Second World War. This is the first Soviet aircraft with liquid-propellant rocket engine. 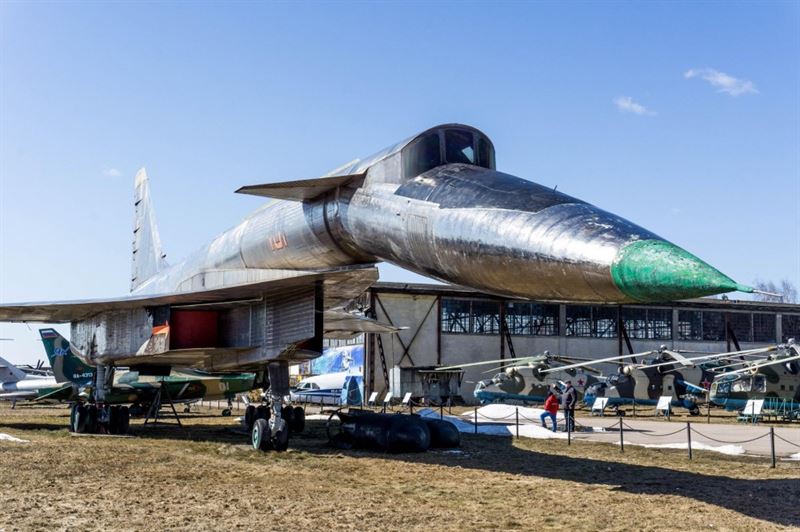 It’s time to go outdoors. The Sukhoi T-4 was a Soviet high-speed reconnaissance, anti-ship and strategic bomber aircraft that did not proceed beyond the prototype stage. In 1963, the Soviet government held a request for proposal among the aircraft design bureaus, with the aim of developing an aircraft analogous to the North American XB-70 Valkyrie. The Sukhoi design, with its high cruise speed of 3,200 km/h (2,000 mph) was favored over the designs submitted by Yakovlev and Tupolev and after a preliminary design review. In June 1964, the building of a prototype was authorized.

Development of the T-4 required massive research effort to develop the technologies necessary, including the manufacturing technologies to machine and weld the materials necessary to withstand sustained Mach 3 flight. Nearly 600 patents or inventions are attributed to the program. The first flying prototype was finally completed in the autumn of 1971. Work continued on an additional three airframes (one for static testing) through 1975. In 1974, the Ministry of Aviation Industry ordered work suspended on the T-4 project, which was officially scrapped on 19 December 1975. The most likely reason for this – too many technological problems faced by the industry in the case the mass production of such an aircraft.

The T-4 had intake ramps similar to the XB-70, was made largely from titanium and stainless steel, and featured a quadruple redundant fly-by-wire control system but also employed a mechanical system as a backup. The aircraft’s droop-nose lowered to provide visibility during takeoff and landing. A periscope was used for forward viewing when the nose was retracted, and could be employed at speeds of up to 600 km/h. Drogue parachutes were used in addition to conventional wheel brakes.

The Yakovlev Yak-130 is a subsonic two-seat advanced jet trainer originally developed by Yakovlev construction bureau and Italian company Aermacchi. It has also been marketed as a potential light attack aircraft. Development of the plane began in 1991 and the maiden flight was conducted on 25 April 1996.

We’re now at the site of helicopters. This is the “flying banana” or the Yakovlev Yak-24. The Yakovlev Yak-24  was a Soviet twin-engine, tandem rotor, transport helicopter developed by Yakovlev in the 1950’s. The Yak-24 saw limited use in the Soviet Air Force, and the exact number produced and duration of service are unknown due to inconsistencies in data. 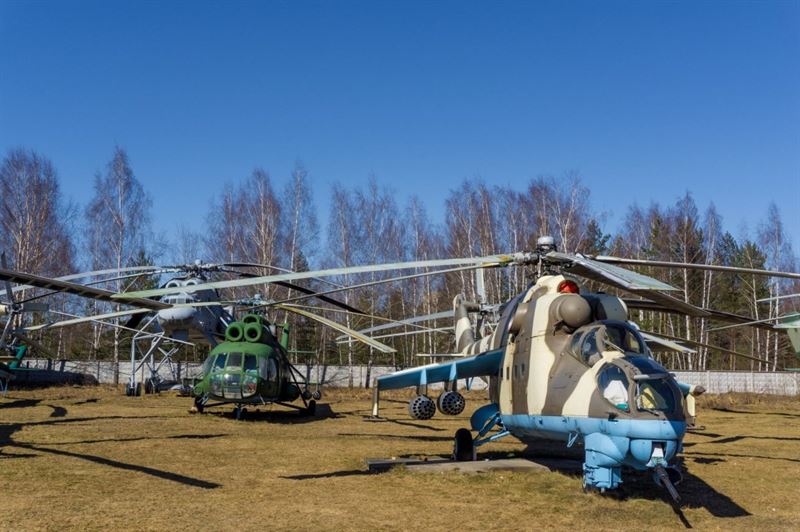 The Mil Mi-6 is a Soviet/Russian heavy transport helicopter that was designed by the Mil design bureau. It was built in large numbers for both military and civil roles. The Mi-6 resulted from a joint civil-military requirement for a very large vertical-lift aircraft, which could be used to add mobility in military operations as well as assist in the exploration and development of the expansive central and eastern regions of the USSR. Flown for the first time on 5 June 1957, the Mi-6 was the first Soviet turboshaft-powered production helicopter.

The Mi-6 was by far the world’s largest helicopter when it was designed in 1954–56; with a maximum load capacity of 12,000 kg. It was also the world’s fastest helicopter; with a top speed of 300 km/h. In its early days, the Mi-6 set many world records, including one for sheer circuit speed at 340 km/h.

The Kamov Ka-25 was a naval helicopter, developed for the Soviet Navy in the USSR from 1958. 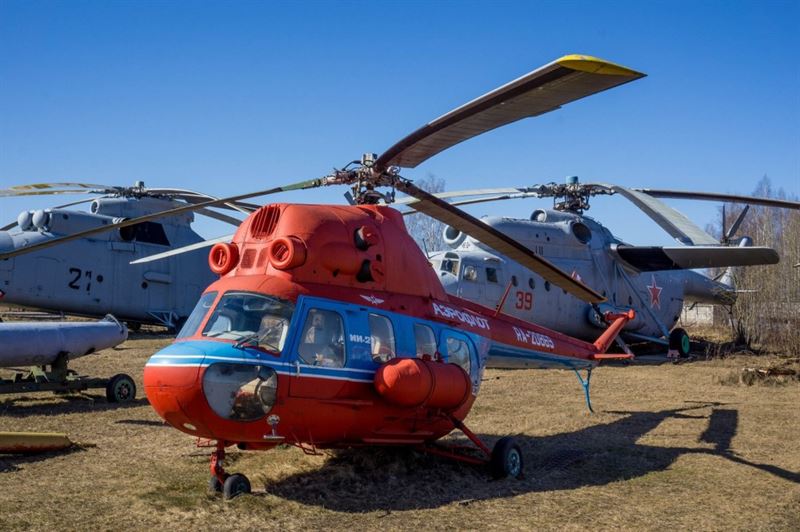 The civillian version of Mil Mi-2.