The Central Armed Forces Museum is located in northern Moscow, near the Central Academic Theatre of the Russian Army. The first exhibition highlighted the military aspects of the Soviet Republic and the Red Army which was organized in Moscow in a building that currently houses the State Universal Store (GUM). It was opened by Vladimir Lenin on the 25 May 1919, following a parade in Red Square.

On 23 December 1919, an order was issued by the government to construct a museum of exhibits on the “Life of the Red Army and Fleet” in the same location. The purpose was to inform the general public about the achievements of post-October-Revolution Soviet Russia, in the areas of military education, culture, and political discipline in the Red Army and Navy.

In 1920, another exhibition was organized, dedicated to the 11th Congress of Comintern in Moscow, about the accomplishments of the Bolshevik government, its armed forces, and the working class (proletariat). More than 150,000 people visited the exhibition. In 1921, the exposition was transformed into the Museum of the Red Army and Fleet, and it was moved to Vozdvizhenka 6 in 1922, into a building (demolished in the 1930s) opposite today’s Russian State Library.

The largest event during the museum’s first years was the Fifth Anniversary Exposition for the Creation of the Worker-Peasant Red Army (RKKA), between 23 February and 1 November 1923. It was visited by a total of 500 groups and 70,000 individuals. In 1924, following the opening of similar museums across the country, it was renamed the Central Museum of the Red Army and Fleet. It moved to the left wing of the Central House of the Red Army on the Yekaterinvskaya (now Suvorova), in 1928. In 1951, the museum was once again renamed — this time as the Central Museum of the Soviet Army. In 1965, it was moved to its present location in a new, special building designed by architects N. Gaygarova and V. Barkhin. It was renamed once again, as the Central Museum of the Armed Forces of the USSR. 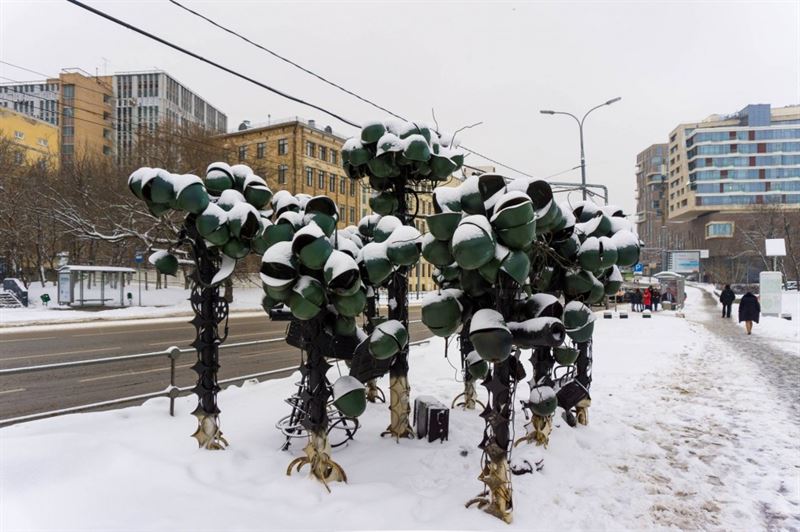 There are several structures designed as helmet trees in front of the entrance. They are made of army helmets and various military iron. 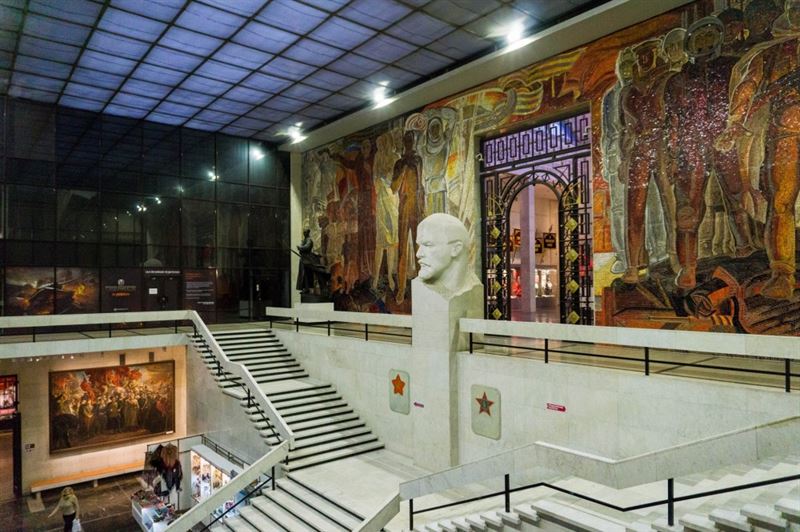 The large entrance hall is decorated with statues, Soviet mosaics, and the omnipresent Lenin. The collection of the museum is divided into two parts. One is exhibited inside the building, with the other located outdoors. First, let’s visit the collection inside. 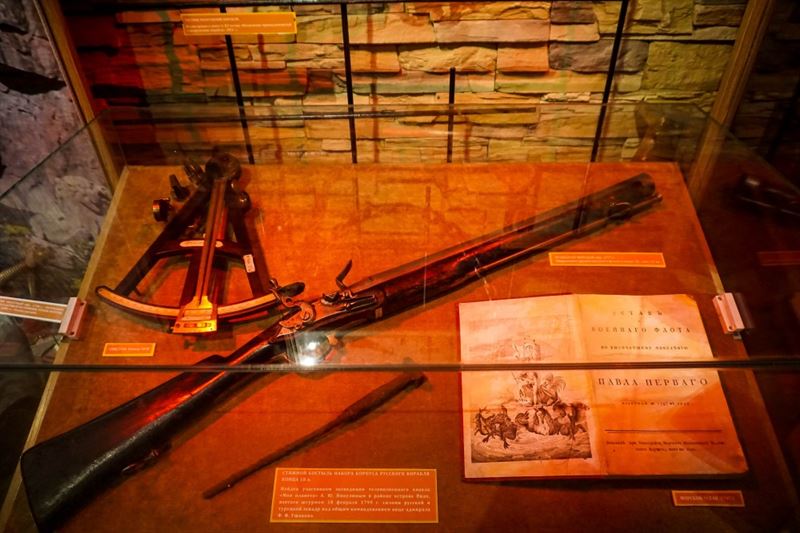 Firstly, two or three halls tell the history of Russian army from the beginning of Romanov dynasty up to the First World War. This is a new part of the museum. As I remember, during the Soviet period the first halls of the museum welcomed visitors with exhibitions about Russia’s Civil War. The museum now focuses on the 20th Century, and there is still some residual ideology from the days when the museum acted as little more than a propaganda machine for Soviet might.

However, efforts have been made to give a revised and less biased version of history, including a more sympathetic portrayal of the White Army that concentrates on the hardships, rather than the triumphs, of the Civil War. During the decades of Soviet rule, the earlier history under the monarchy was overlooked or held in low esteem. 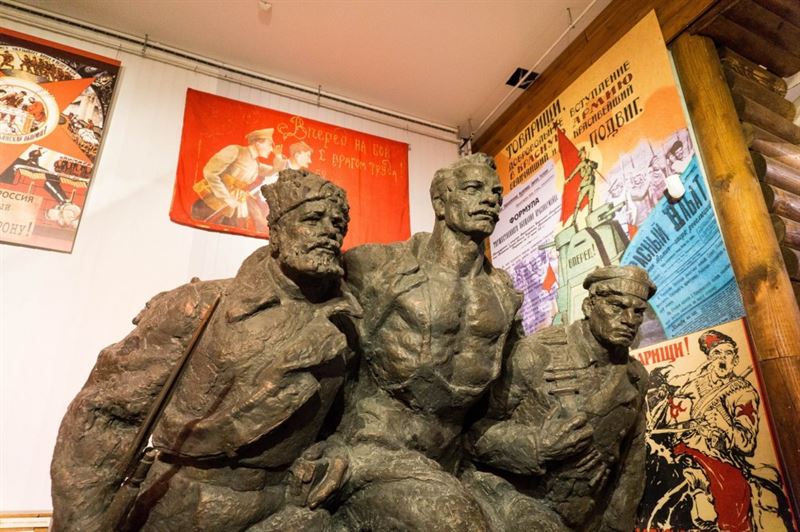 The first hall on the Civil War greets us with a large sculpture of “red bodybuilders” — as my sister called them. 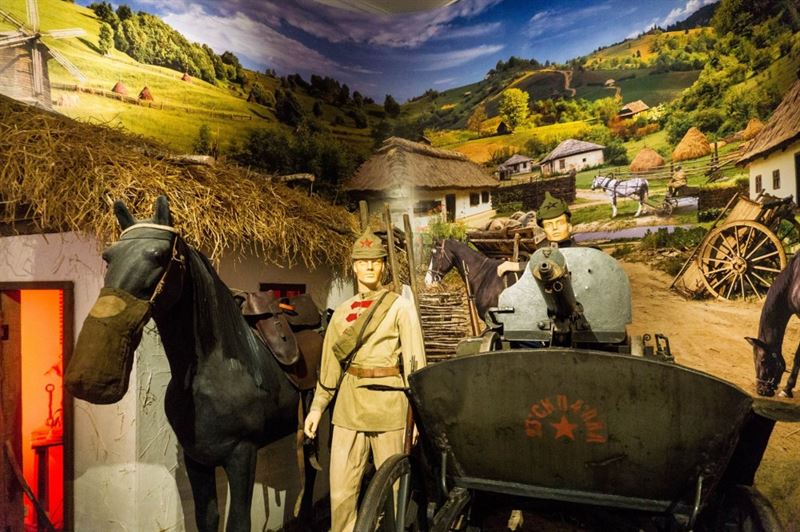 The Tachanka could have been a horse-drawn machine gun platform, usually a cart or an open wagon with a heavy machine gun installed in the back. A tachanka could be pulled by two to four horses, and required a crew of two or three soldiers (driver and gun crew).  A number of sources attribute its invention to Nestor Makhno (a Ukrainian anarchist–evolutionary and the commander of an independent anarchist army in Ukraine in 1917–22). You can see modern versions of the tachanka on TV.  In reports on the war in Syria and Iraq, you often see small pickup trucks with large tripod machine guns mounted on the back. 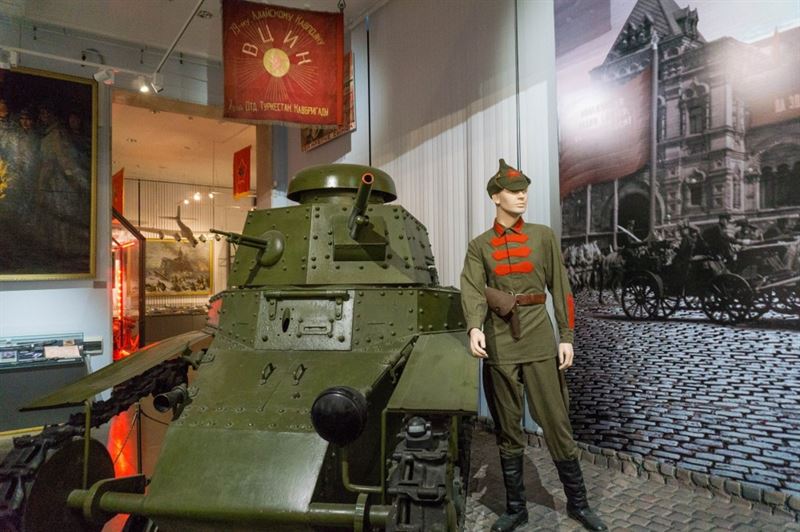 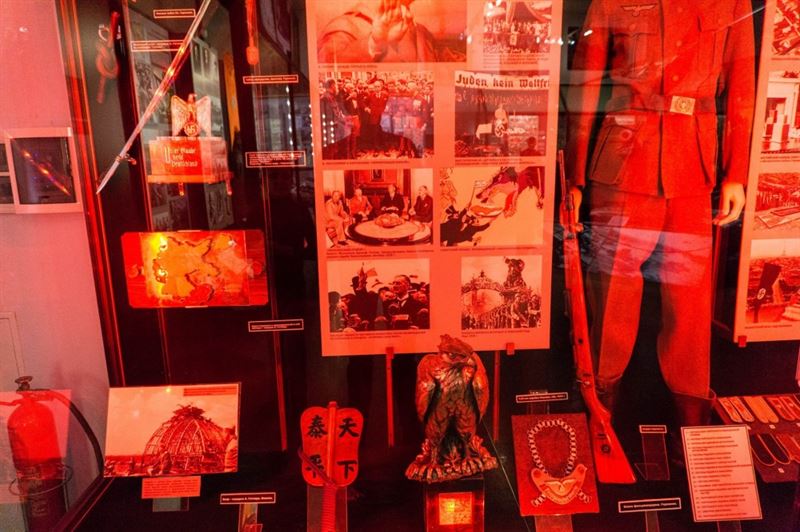 The next hall begins with the collection gifts that Hitler received from different countries and organizations. This hall is focused on the history of the Red army in second part of 1930’s and the situation in the world in that time. It contains exhibits about Soviet–Japanese border conflicts, the civil war in Spain, the Munich agreement, the Molotov–Ribbentrop Pact, the Soviet-Finnish war, the beginning of World War II, etc. 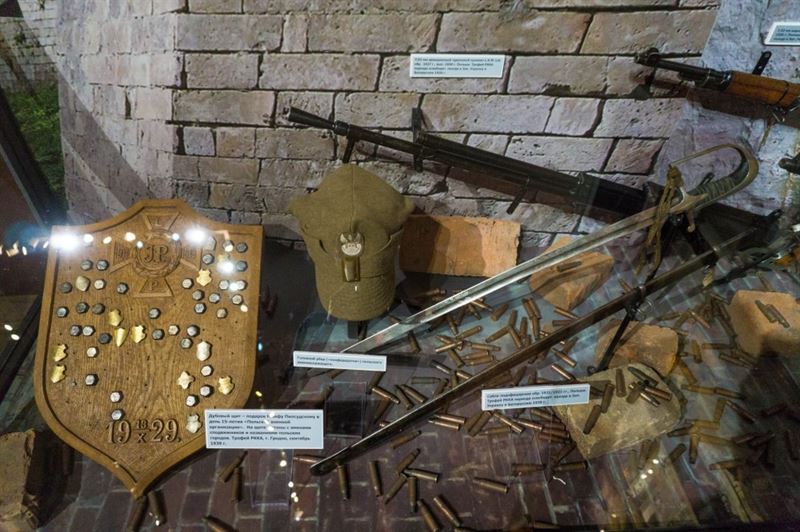 Oak shield–a gift to Polish leader Józef Piłsudski with the names of Polish towns and his comrades. It’s strange that inscriptions near exhibits still refer to the Soviet invasion of Poland in 1939 as the “liberation campaign in Western Ukraine and Belarus,” since of course that campaign had nothing to do with liberation. 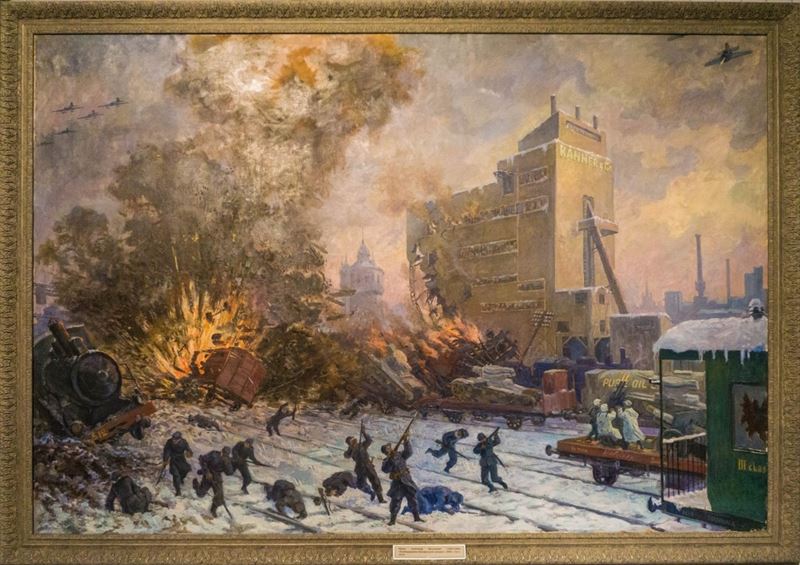 The name of this painting is “The Bombing of White Finland’s Station”. Soviet propaganda terminology referred to the Finish government and army “whites” during the Winter War, just as it did during the Civil War. On 1 December 1939, the Soviet Union formed a puppet government, called the Finnish Democratic Republic in the parts of Finnish Karelia occupied by the Soviets. It was headed by Otto Wille Kuusinen. Kuusinen’s government was also referred to as the “Terijoki Government,” after the village of Terijoki, the first settlement captured by the advancing Red Army.  After the war, the puppet government was disbanded. 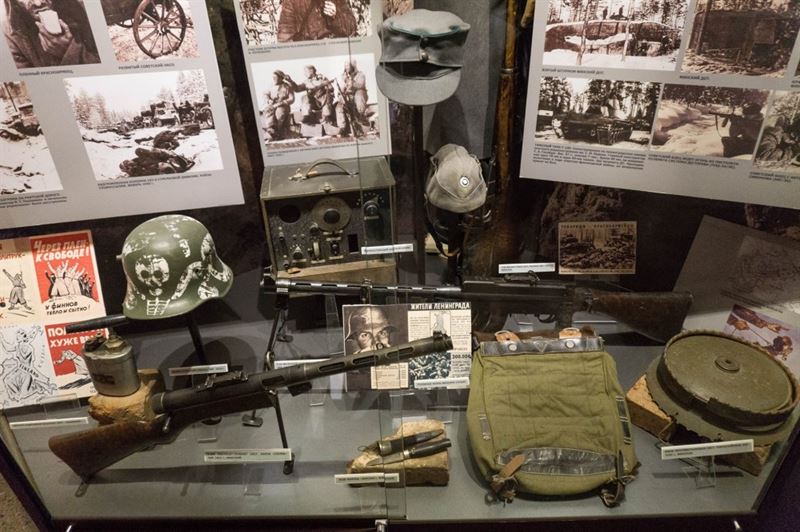 Some exhibits are related to Soviet-Finnish War. There are Finnish equipment items, weapons, and propaganda leaflets. The leaflets urged Soviet soldiers to surrender. This type of propaganda was popular later, in the time of Great Patriotic War (on both sides).

“The Defenders of the Brest Fortress”, by Petr Krivonogov (1951). The fortress defenders had no warning when Nazi Germany invaded on 22 June 1941, and it became the site of the first major fighting between Soviet forces and the German Wehrmacht. From the first minutes of the invasion, Brest and Brest Fortress were shelled by the Wehrmacht. The initial artillery fire took the unprepared fortress by surprise, and inflicted heavy material and personnel casualties. Fierce battles were fought in the fortress.  Although the Soviet soldiers, in the opening hours of the battle, were stunned by the surprise attack — outnumbered, short of supplies, and cut off from the outside world–many of them resisted for a long time. 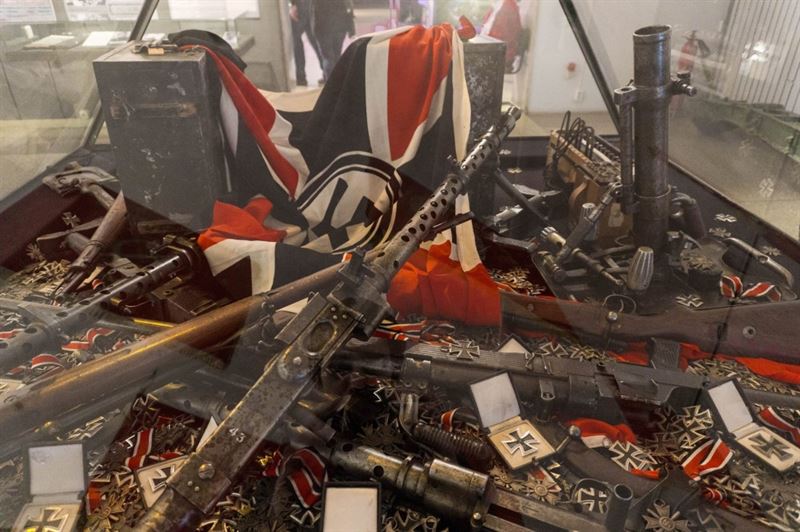 A pile of German arms and awards in the middle of one of the halls, devoted to Great Patriotic war. 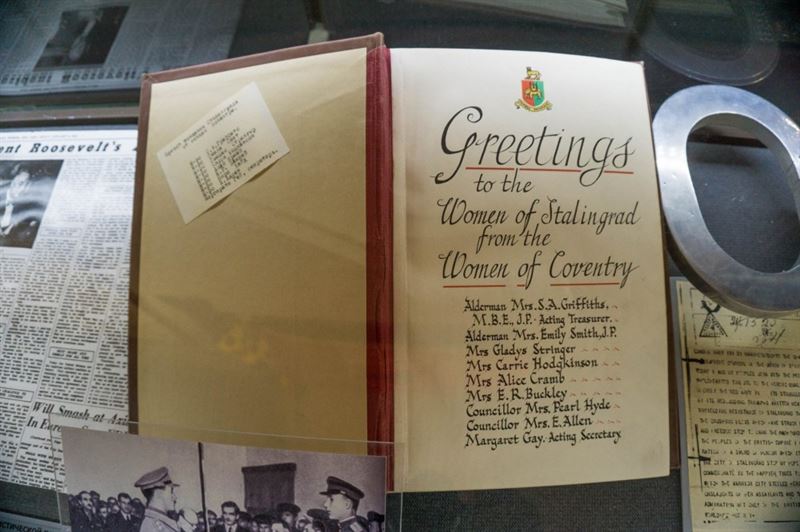 The Coventry Blitz was a series of German bombing raids on the English city of Coventry. The city was bombed many times during World War II by the Luftwaffe. The most devastating of these attacks occurred on the evening of 14 November 1940.

The battle of Stalingrad diorama. 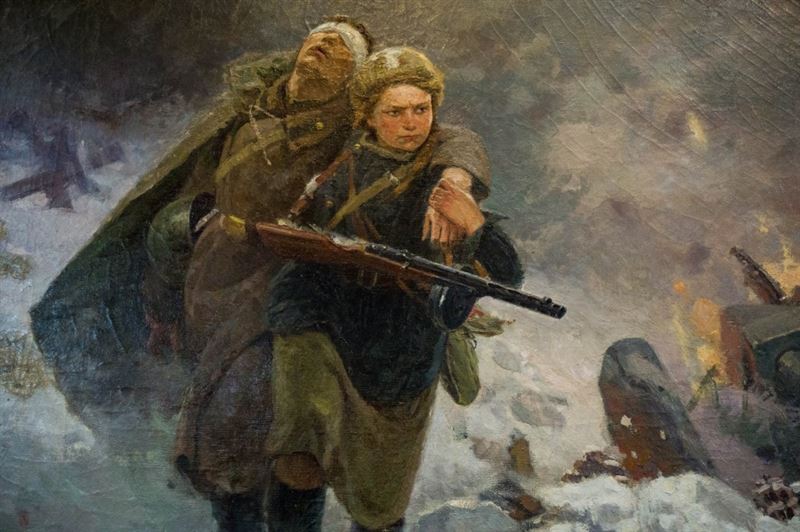 “Little Sister”, Marat Samsonov. This work is dedicated to all women who served in the armed forces. During the Second Great Patriotic War, many women served at the front. True, they were mainly not in the “combat arms” (although some did indeed serve as fighters, primarily as snipers), but they did serve in duties that put them in harm’s way, especially the combat medics. The bravery shown by these women was inspiring, and some even won recognition as “Heroes of the Soviet Union”. 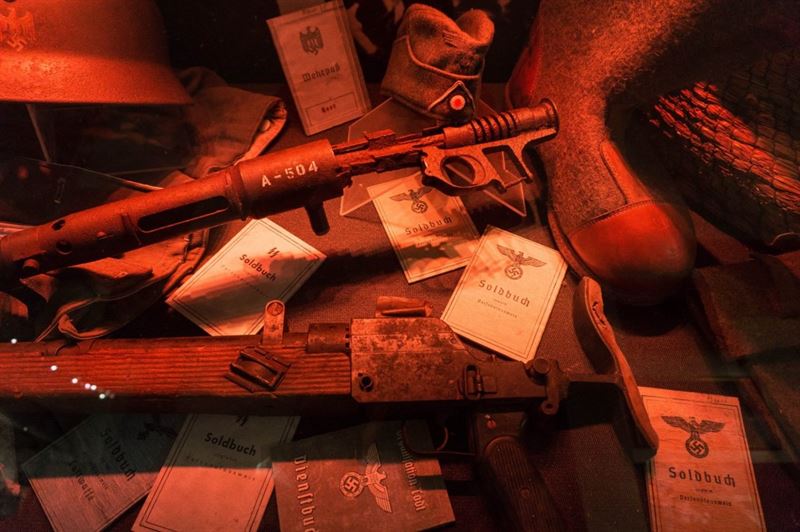 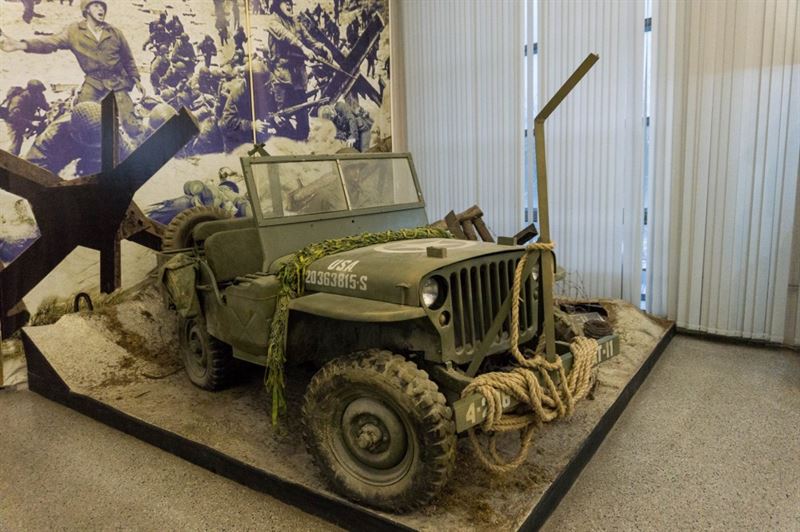 A wire cutter is a unique invention designed to protect personnel in open vehicles against taut-wire traps. It was first used late in World War II and mainly installed as a field modification. There are no standard models, but wire cutters usually constructed of iron, installed vertically and bolted onto the front bumper, rising between two to three feet above the top of the raised windshield. 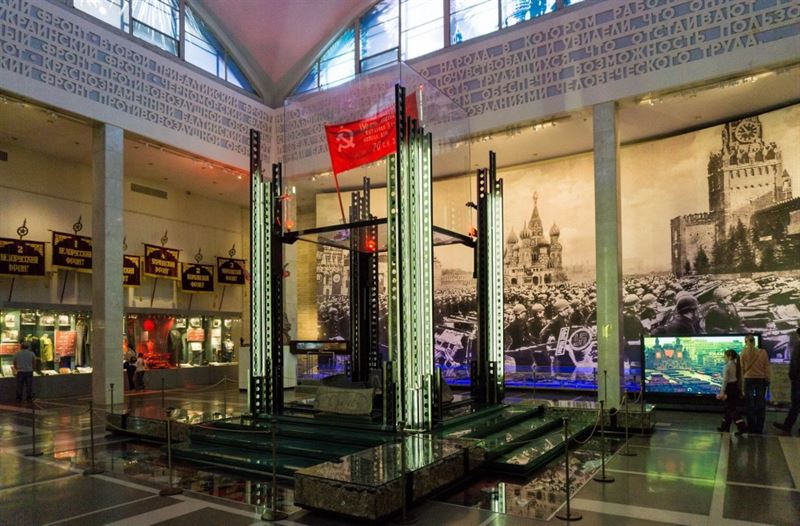 The central and last hall is about the Great Patriotic War. The most prized display consists of the Victory Banner and all of the front banners and captured German ones that were used during the Victory Parade in 1945. The banner in the glass box is a copy, but museum collection also has a real Victory banner, which is stored in a special capsule in the basement of the Museum. 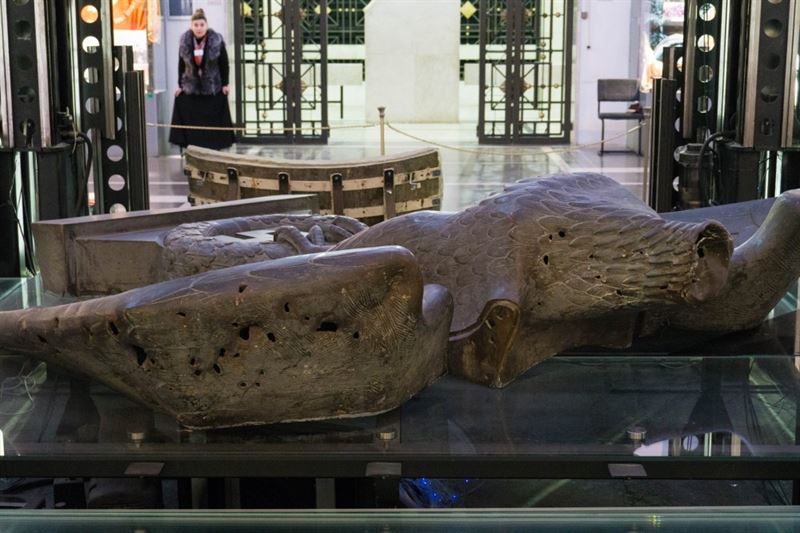 This is the bronze eagle that was installed above the entrance of the Reich Chancellery before 1945. In that year, the eagle was shot down from its perch by Soviet soldiers. 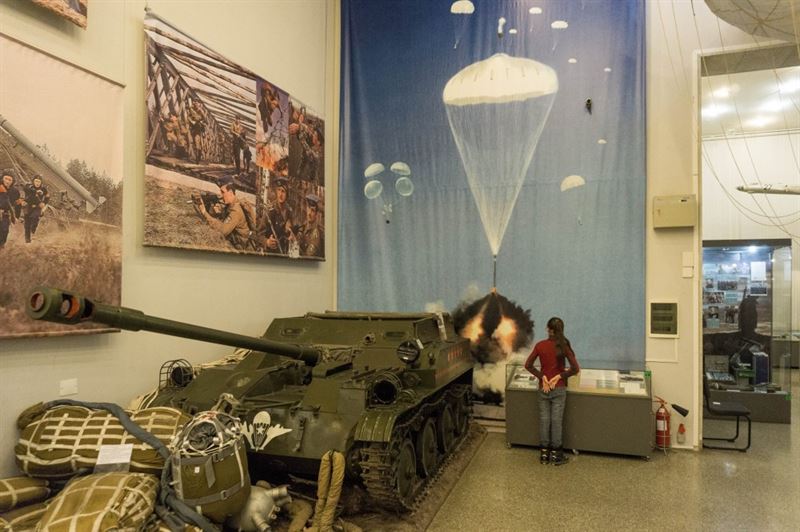 The last halls display the post-war and modern developments of the Soviet Army and Navy. 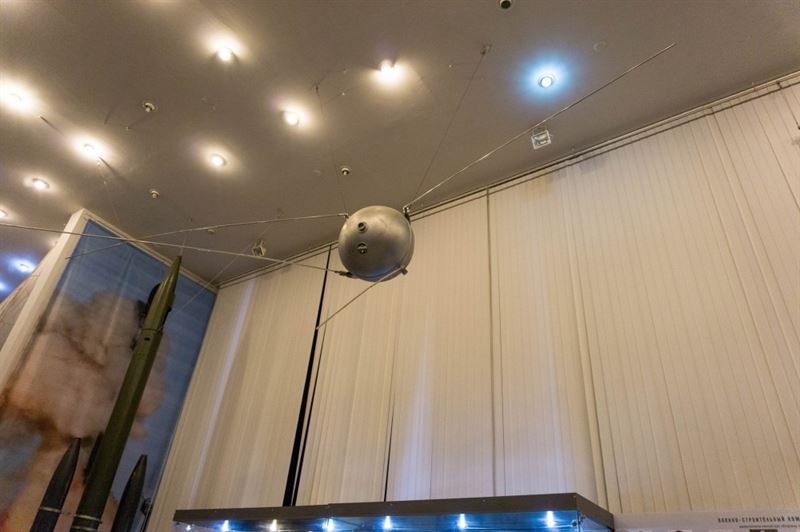 Sputnik 1 was the very first artificial Earth satellite. The Soviet Union launched it into an elliptical low Earth orbit on 4 October 1957. It is a polished sphere, 58 cm (23 in.) in diameter, with four external radio antennas to broadcast radio pulses. Its radio signal was easily detectable even by radio amateurs, and the 65° inclination and duration of its orbit made its flight path cover virtually the entire inhabited Earth. 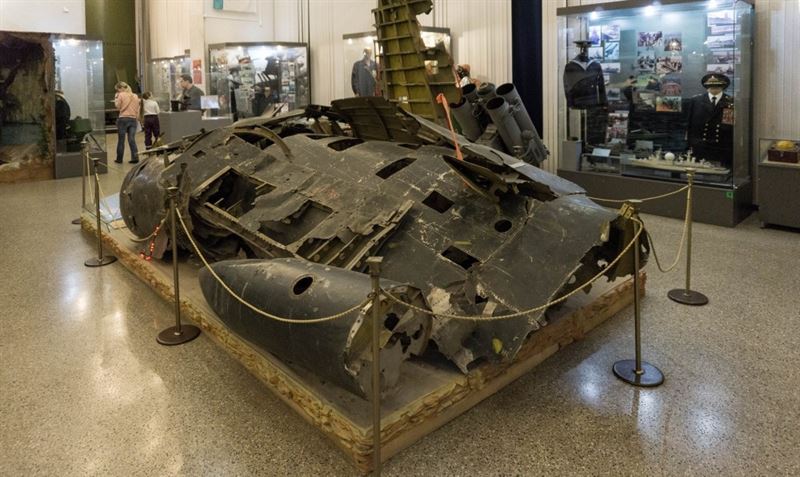 The Lockheed U-2 is an American single-jet engine, ultra-high altitude reconnaissance aircraft, operated by the United States Air Force (USAF) and previously flown by the Central Intelligence Agency (CIA).  The U-2 was considered invulnerable until 1 May 1960, when, during a routine flight over the Soviet Union, this aircraft was shot down by a missile. There is debris of that U-2 in the photo above.

The aircraft, flown by Central Intelligence Agency pilot Francis Gary Powers, was performing photographic aerial reconnaissance when it was hit by an S-75 Dvina (SA-2 Guideline) surface-to-air missile and crashed near Sverdlovsk (renamed Ekaterinburg now). Powers parachuted safely and was captured.  He was convicted of espionage and sentenced to three years of imprisonment, plus seven years of hard labor.  However, he was released two years later on 10 February 1962, during a prisoner exchange for Soviet KGB agent Rudolf Abel (William Fisher).

In 2015, the Steven Spielberg feature film “Bridge of Spies” was released, about negotiations for Powers’ release. As usually happens in Hollywood, artistic liberties were taken, with certain factual details sacrificed in favor of drama. 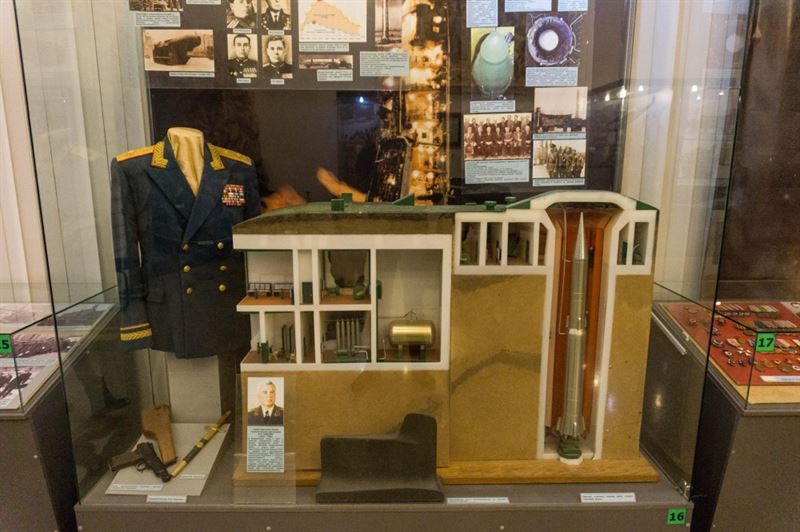 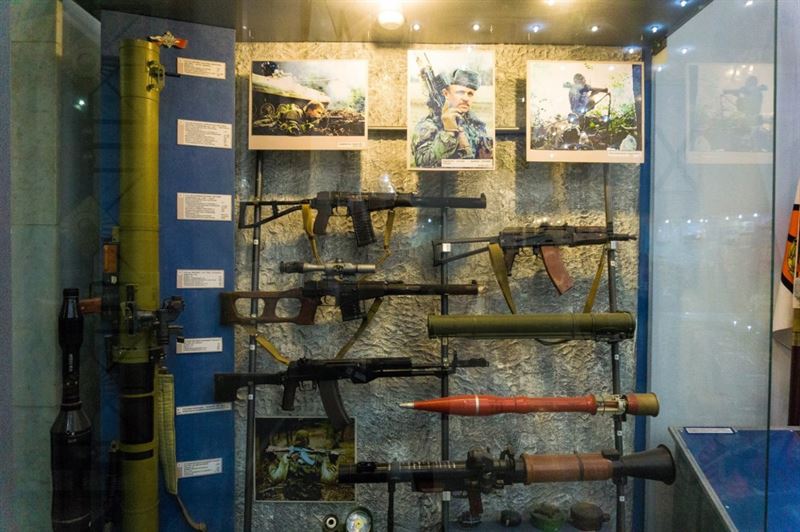 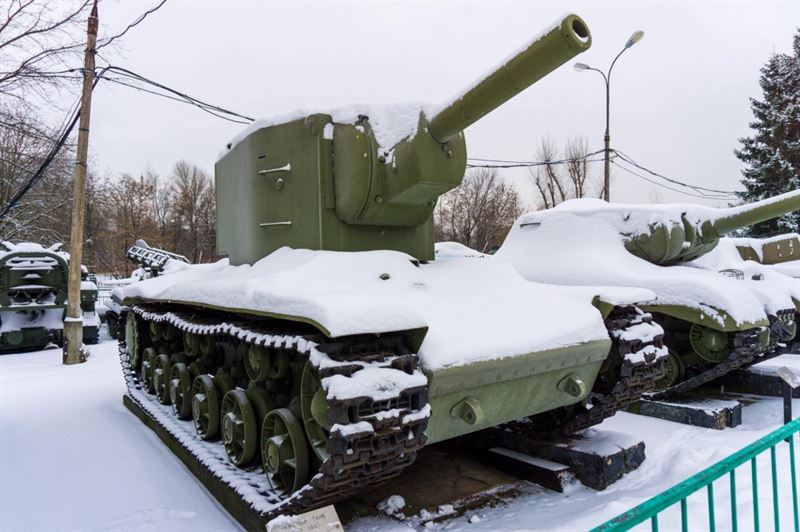 Likely the only remaining Soviet KV-2 tank. This is a tank from early World War II. It was named for famous revolutionary and politician Kliment Voroshilov.

T-28. One of the stranger machines of pre-war period.

The 2A3 Kondensator 2P, a Soviet 406mm self-propelled howitzer. The 2A3 originated during the Cold War as a response to the United States’ new “Pentomic Division” tactical doctrine that emphasized heavy use of nuclear weapons, including nuclear artillery. Western observers got their first look at the new weapon during a 1957 parade on Red Square. Initially, observers thought that the weapon was a mock-up created for deterrent effect.

Kondensator had an exceptionally short service life. Following a period of extensive testing, the weapons were assigned to the Artillery High Command Reserve. There, they remained in service until the military reforms of Nikita Khrushchev were enacted, that favored more effective missile systems over the super-heavy artillery of the Stalinist era.

This OV 5067 Armored Train was built at the Bryansk plant in 1896 (according to other data, in 1905). The locomotive was part of the armored train “Krasnovostochnik”.  It took part in both the Civil War and the Great Patriotic War. The other parts of the train are currently in the Museum of the Great Patriotic War on Poklonnaya Hill.

This RSD-10 Pioneer was an intermediate-range ballistic missile with a nuclear warhead, deployed by the Soviet Union from 1976 to 1988. The missile used a MAZ-547A/MAZ-7916 transporter erector-launcher, produced in the Belarusian SSR by the Minsk Automobile Plant. 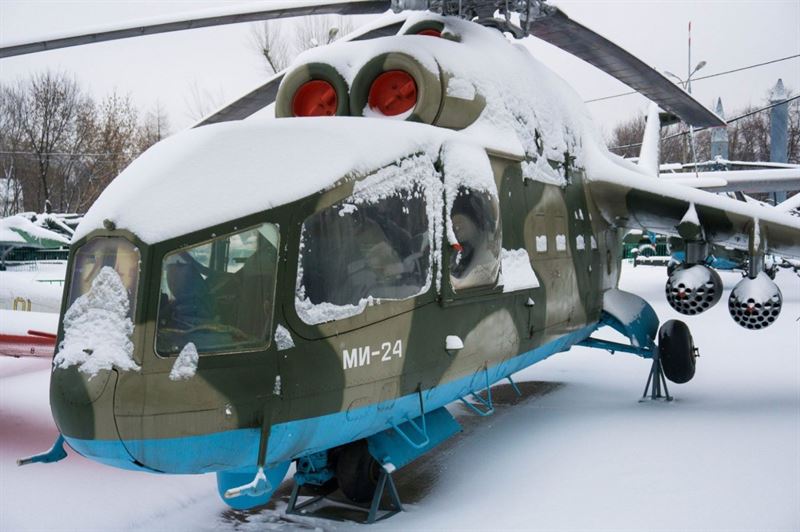 There are many more exhibits outside, but I took photos of only a few. The museum is very interesting, in my opinion, despite being a bit schizophrenic in its attitude toward war. There are plenty of exhibits and unique display items to see and appreciate here — not just for the historian, military veteran, weapons fan or kids but for the general public. Some of the exhibits concerning World War II are especially unique.

5 thoughts on “The Central Armed Forces Museum in Moscow, Russia”