Canada and the US have been close allies for over a century.  But it wasn’t always this way, and the Citadelle of Québec City and its surroundings are proof.

The largest British fortification in North America, the Citadelle was constructed between 1820 and 1850. Having repelled American invasion during the War of 1812, the British were still concerned, and rightly so, about defending Canada.  As such, the Citadelle and several other fortifications, including Fort Henry in Kingston, Ontario, were built along the St. Lawrence River.

The star-shaped design is based on those of Sébastien Le Prestre Vauban, a French engineer known for his fortification plans.  The first occupants were British forces, followed by the Royal Canadian Artillery.  Since 1920, the Citadelle has been home to the only Canadian French-language regular force infantry regiment – the Royal 22e Régiment, also known as the “Van Doos” since 22 in French is vingt-deux.

The Citadelle is a functioning military base, and also the official residence of the Governor General of Canada. However, visitors are welcome, and the fortress houses a very good museum.  The museum is within the original vaults of the East Casemate, making it easy to see the architectural features of the fort while taking in its history.  The permanent exhibition showcases 100 years of Royal 22e Régiment history from its formation in 1914, and includes personal stories, archival footage, several artifacts, and interactive maps.  There are often special exhibitions on site as well, and these rotate throughout the year.

As an active military installation, the Citadelle is considered a “living fortress.”  Visitors can also see the changing of the guard and daily noon gun.

The site pre-dates the Citadelle as a military installation, however.  As it is situated at a high point in the landscape overlooking “old” Québec City and the St. Lawrence River, the area had been used in some defensive capacity since the French regime, including during the War of 1812, and, notably, the Seven Years War (1756 – 1763).

Adjacent to the Citadelle sits the Plains of Abraham.  The battle of the same name took place here on 13 September 1759, during which British soldiers, under command of General Wolfe, defeated the French, under the Marquis de Montcalme, in about 30 minutes.  Both commanders died of their wounds, but the British won the day, and took control of Québec.  Today, there is a good visitor centre with exhibitions in the park.

Prior to the battle on 13 September, Wolfe had laid siege to Québec for three months, firing cannons from the Pointe-Lévis, directly across the St. Lawrence River.  The site served as the British army’s main encampment in the area.

Three forts were later built here: one by the British from 1856-1872, and the others were constructed by private businesses between 1865 and 1869. Following the US Civil War, while Great Britain (and thusly the territory now known as Canada) remained neutral, an invasion by the US was anticipated.  However, the forts were never manned, as the Treaty of Washington in 1871 rendered them unnecessary.  The area is now a National Historic Site of Canada.

After visiting the Citadelle and Pointe- Lévis, a stroll around Old Québec is an absolute must.  This beautifully restored part of the capital of the province of Québec evokes European streets and exudes history from every building.  There are some very fine restaurants (my favourite being Aux Anciens Canadiens. It has a red roof – you can’t miss it).  The walled town is easily walkable, although the hill upon which it sits is quite steep. Fortunately, there’s a funicular, with fantastic views.  The famous Château Frontenac sits at the top of the hill overlooking Old Québec and the St. Lawrence River. It was here, and at the Citadelle, that the Quebec Conference took place during the Second World War.  Canadian Prime Minister Alexander Mackenzie King hosted British Prime Minster Winston Churchill and US President Franklin Roosevelt to discuss plans for the invasion of France. 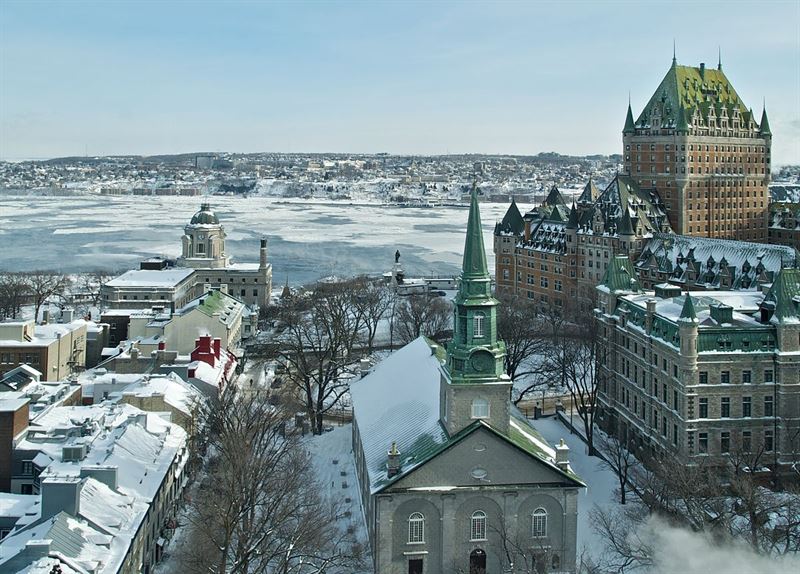 The city has something happening year round, and is particularly lovely in the winter.  Bundle up and bring good boots though – Québec gets a lot of snow!