As you will read in a number of my articles, during my law enforcement
career, I was fortunate to work for agencies that allowed varying degrees of
flexibility, when it came to agency firearms polities. This was especially the case,
when I served as a U.S. Customs Service Patrol Officer, Air Officer, Special Agent
and Senior Special Agent. Having this level of flexibility enabled me to carry
various government issued and personally owned firearms in different calibers. In
federal service, this level of flexibility authorized the carrying of handguns
chambered in 9mm, .45 ACP, .38 Special, .357 Magnum and .380 ACP caliber.

THE 9MM SIG 226
Shortly, after I transferred to Miami in 1985, SIG Sauer established a
company based in Virginia called SIGARMS. SIGARMS was the entity that
imported SIG Sauer firearms into the U.S. Initially, the DA/SA SIG 220 was the
first SIG pistol imported into the United States. As a point of information, the
Swiss adopted the P226 in 9mm, also known as the P75, as their military service
pistol in 1975. Unlike the more modern design, the original DA/SA SIG 220 was a
9mm pistol that utilized a single column magazine and the European “heel
mounted” magazine release, that was located at the bottom of the grip.
Because the 1980s was the era when high capacity 9mm pistols were coming
into widespread law enforcement service, SIGARMS reacted to this trend by
creating the 9mm SIG 226. In essence, the P226 was a SIG 220 with a redesigned
aluminum frame, that accommodated a 15 round magazine and a more traditional
frame mounted magazine release button. The early SIGs were also manufactured
with a carbon steel slide assembly. As soon as the now famous 9mm SIG 226 became available, a buddy of
mine put me in contact with a senior gunsmith at SIGARMS. One thing led to
another and before long I became the proud owner of a P226. When I mentioned
my concern about corrosion, due to being stationed in Miami, my new contact at
SIG sent me an un-cataloged Parkerized 9mm SIG 226. Bear in mind, that during
this period of time, night sights were initially unavailable.

I took a brief vacation from carrying my 9mm SIG 226 when I transferred to
U.S. Customs Air Operations and I was issued a .45 ACP caliber S/A Colt Series
70 Government Model 1911 and a S/A 9mm Browning Hi Power. When I was
promoted again and I became a Special Agent assigned to the Miami Air
Smuggling Investigations Group 7, I adopted the 9mm SIG 228 as soon as this
pistol became available. The compact P228 was adopted because this pistol was
better suited to my new duties as a criminal investigator.
The 9mm SIG 225 was also available at that time. The P225 was a SIG 228
size compact pistol that utilized a lightweight alloy frame, that accommodated a
single column 8 round magazine. The original P225 also carried the designation of
P6 when used by the West German Police. (The SIG 228 is basically a high
capacity SIG 225. The 228 was designed to appeal to a market that was gravitating
toward the use of higher capacity 9mm pistols.)

Even though I had one of my 9mm SIG 226 pistols Parkerized to aid in
corrosion resistance, at no time have I ever owned a firearm that became damaged,
or inoperable due to corrosion. In fact, when I worked in NYC as a uniformed
police officer, I carried an issued blue steel Smith & Wesson Model 10 .38 Special
service revolver in a duty holster in all four seasons. I also carried a number of
other revolvers and pistols that were constructed in “blued steel.” None of these
handguns ever failed to work as designed, despite being constantly exposed to the
elements. This included my carbon steel 9mm SIG 226 and my carbon steel 9mm
SIG 228, both pistols that were carried in torrential rain storms, in and around salt
water, throughout the Caribbean, in harsh winter blizzard conditions, as well as in
desert terrain. I mention this because you should be concerned about the impact of
corrosion and the use of firearms in harsh operating conditions. The simple truth
is, that even firearms that have a reputation for holding up after exposure to the
elements and extensive use, need to be properly maintained. As a result, I
maintain all of my firearms the same way, regardless of how they are constructed
and whether they have a corrosive resistant finish.

SIGS EVOLVE
In order to accommodate being chambered in .40 S&W and .357 SIG
calibers, SIG developed the SIG 229, a compact pistol on par with the 228, only
the 229 was manufactured with a blackened stainless steel slide assembly and a
lightweight alloy frame. This also resulted in the development of the P226, the
P226 MK25 Navy, the 220, the 220 Carry Model, the 220 Compact, the SP2022,

the 239, the M11A1, the 225A1 and the 224 models with the same type of stainless
steel slide construction. To aid in corrosion resistance, a Nitron coating was
applied to the stainless slide assembly.
The DAK trigger system also came into service as SIG’s version of a Double
Action Only style operating mechanism. Personally, I always believed that the
DAK trigger was underrated and deserved more attention. The DAK trigger
system was especially easy to transition to, for end users who were revolver
shooters. In fact, one of THE MOST accurate SIGs I ever owned and trained with,
was a P220 Carry Model in .45 ACP, that was fitted with a super smooth DAK
trigger. I also evaluated a SIG 224 with a DAK trigger that was also very easy to
shoot with precision.” Personally, I never cared much for the Single Action Trigger that SIG offers
on some of their Classic Series of pistols. I felt this way, because the SIG S/A
trigger on a Classic Pistol like the 220, isn’t really the same S/A trigger that you
find on a 1911 style pistol. Instead, the S/A trigger that is offered on Classic SIGs
feels like the same S/A trigger that is used on a DA/SA pistol.

In addition, one of the DA/SA SIG 229s in 40 S&W that I owned
experienced one malfunction due to a defective magazine. Once the magazine was
replaced the pistol functioned flawlessly. This is why you should NEVER carry
any magazine fed firearm before you field test your magazines, to insure that they
function reliably at all times, with all kinds of ammunition. I also experienced a
feeding problem with a DA/SA SIG 229 in 40 S&W, while using an early
interchangeable .357 SIG barrel. Once this pistol was sent to the factory for
inspection, it returned in fine working order. As stated above, all of the other 229s
that I have owned and field tested were flawlessly reliable.
I also tried field testing a new in the box 9mm SIG 226 Enhanced Elite that
had to be a factory lemon, because this pistol was horribly unreliable, so much so it
wasn’t worth continuing the test. As you can see from the rather detailed data
provided above, encountering a reliability problem with Classic Series SIG Pistols
is a very rare occurrence. The fact that it can happen is the main reason why you
must test fire and periodically train with the firearms that you rely on for personal
protection and home defense.

ERGONOMICS
Ever since I began training with, carrying and evaluating Classic Series SIG
pistols, I have used them with standard factory grips or with Hogue Rubber Grips.
Now that I am older and have developed arthritis, I decided to experiment with
installing Talon Rubber Grips on one of my carbon steel 9mm SIG 228.
While conducting a side by side comparison of a 9mm 228, that is now fitted
with Talon Grips and my carbon steel 9mm 226 that is equipped with a set of
Hogue Rubber Grips, I noticed the following: First, the thickness of the upper
portion on the left side of the Hogue Rubber Grip impeded fast and easy access to
the slide release lever. Even though the Hogue Rubber Grips with finger grooves
are very effective in improving ergonomics, having the presence of too much
rubber near the slide lever never appealed to me.

TALON TO THE RESCUE
Once I had a set of Talon Rubber Grips applied to a SIG 228, I wondered if
such a relatively thin layer of Talon rubber material would provide the same
improved ergonomics as the thicker set of screw on Hogue Grips. Much to my
surprise, the Talon Grips provided just enough textured rubber material covering
the surface of the factory SIG grips, to make my P228 extremely comfortable to
grip and shoot. The application of Talon Grips also provided the added benefit of
enabling me to easily operate the slide release lever. Where I’m from they call this
a “good deal.”
After conducting this side by side comparison, I intend to replace the Hogue
Rubber Grips that are currently on my SIG 226, with a set of Talon Rubber Grips.
However, be advised that if you intend to remove the original screw on factory SIG
grips, once they are covered with Talon Rubber Grips, you need to perform some
additional cutting. This is necessary to expose the original side panel screws and
allow for the removable of the grips.

CLOSING REMARKS
In a day and age when all kinds of new and improved striker fired pistols are
being manufactured, I still find my DA/SA Classic Series carbon steel 9mm SIG
Pistols to be just as capable and effective, as any of the more modern designs. This
doesn’t mean that I don’t own and carry more modern Personal Defense Weapons,
that became available in the 21st Century. I use what works for me, because in the
end, that’s all that matters.

About the author: Nick Jacobellis is a Medically Retired U.S. Customs Agent and a former NY police officer who was physically disabled in the line of duty while working undercover as a federal agent. To date, the author has published over 206 magazine articles and nine action-packed nonfiction, historical fiction, and fiction books: Controlled Delivery Books One and Two, The Frontline Fugitives Books I, II, III, and IV, Buck Banderas U.S. Marshal Books One and Two and A Special Kind of Hero. These books have received 5 Star reviews and are available on Amazon.com (US), and (UK). He was born and raised in Flatbush section of Brooklyn NY and has an BS Degree in Police Science from John Jay College of Criminal Justice. 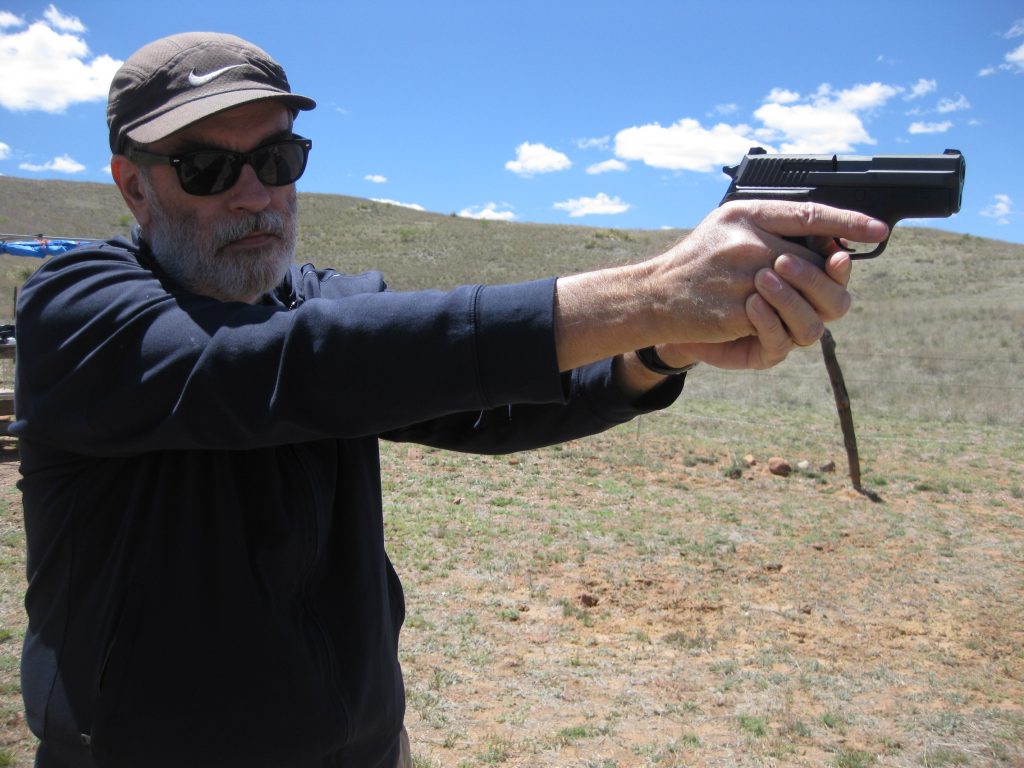