Before the League of Nations, the United Nations, and the European Union, there was the Congress of Vienna. This series of meetings lasted from November 1814 through June 1815 and mostly consisted of discussions between the leaders of several countries in an attempt to keep war from breaking out again. 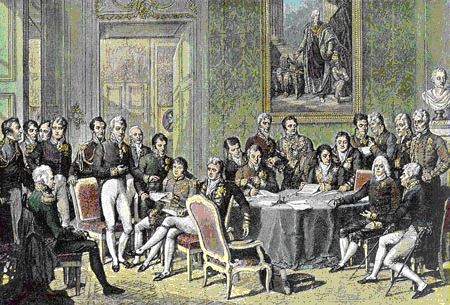 Before the Congress of Vienna, so-named because the meetings took place in Vienna, Austria, Europe had been plagued by wars, France in particular. It started with the French Revolution, in which the monarchy, who had been in charge of the country for centuries, was overthrown. The Revolution, which took place from 1789 to 1799 and led to the rise of Napoleon and the French Revolutionary Wars. Those wars overlapped with the Revolution, 1792 to 1802, and saw France gaining plenty of new territories, including some in Italy and even the Louisiana Territory over in what is now the United States. Finally, the Napoleonic Wars, which took place from 1803 to 1815, took place throughout the European Continent and wound up being the downfall of Napoleon.

After all of that warfare, many European countries were ready for some peace and quiet. This is why the leaders of Russia, Great Britain, Austria, and Prussia (called the Four Great Powers), as well as their fifth wheel – France – and a number of other country’s representatives (200 in all!), decided to divide up lands and come up with a kind of compromise.

Some of the divisions and compromises that were agreed upon at the Congress of Vienna include Russia receiving control over most of modern-day Poland, as well as Finland, while Prussia was awarded the remaining section of Poland (then called the Duchy of Warsaw) and parts of the Rhineland. Also, the Netherlands became one single country, and Switzerland was given neutral status. (It remains neutral to this day.) The German Confederation was created, and a number of other smaller territories changed hands. Notably, Britain gave up some part of its empire, including the Dutch East Indies.

It should be noted that all of the countries involved agreed on one thing – the slave trade. They abolished it seven years after the United States had stopped importing slaves.

Although the Congress of Vienna is criticized for ignoring some of the main issues of the time in favor of promoting overall conservatism, it did accomplish its main goal: peace. The divisions brought about by the Congress, as well as the borderlines drawn up through its meetings, lasted up until the 20th century when World War I started.