Born Arthur Gordon Bartlett, 13th April 1894, Montreal, Canada. Lived most of his life in Liverpool when the family decided to return to England. Educated at Bedford College before becoming a Clerk in a Liverpool office.

Gordon Volunteered for the Army in August 1914 at the outbreak of war and joined the 1/10th Battalion, The Kings (Liverpool) Regiment. (Liverpool Scottish) with the number of 3010. He entered the theatre of war in November 1914. From letters that he sent home, it would appear that he spent much of his time near or at the front line.

On June 15th 1915 his battalion marched to the front at Bellewaarde for the attack in the early hours of Wednesday 16th. After the course of this battle Gordon was missing and it was presumed he fell in the field of battle, his body could not be found. Lieutenant Noel Godvrey Chavasse spoke to a man who stated that he saw Gordon killed. In a letter to a Dr Owen, Chavasse wrote about Gordon.

In 1927 his family received a letter from a German Medical Officer. In it he described how they found and buried the bodies of three English soldiers, one of them, Gordon. He enclosed a sketch map which shows where they are buried. It is unknown if any members of Gordon’s family visited the spot where he fell.

Dr Schwirzke also enclosed some papers found on Gordon’s body, including a telegram from his mother stating that his father had been rescued from the liner Lusitania after being sunk by a German submarine in the Irish Sea. (Gordon’s father had previously been reported missing).

His name is inscribed on the Menin Gate at Ypres and is also recorded in the Scottish National War Memorial at Edinburgh Castle.

Chavasse letter to a Dr Owen

Poor Bartlett is most certainly dead. I have just been speaking to a man who saw him killed.

He was a gallant and as cheerful a young fellow as we had in a brave battalion. He faced danger and hardship alike, in the same brave, uncomplaining, indomitable and dashing spirit

Before he died, he had charged with the battalion when they carried all before them. The bravest of the brave. For he with a few comrades, bombed and put out of action a German machine gun, a splendid achievement.

Then when we had to retire to the first line of captured German trenches, he was in their trench quite cool and collected when he was hit direct by a bomb, fired from a German trench mortar. He was killed instantaneously and painlessly.

We have lost too many brave young fellows. I miss their faces everywhere and feel very sick at heart, but we must stick to it, and not let them down, but prove worthy of them.

Letter from a German Medical Officer

I will gladly tell you what I know about your fallen son. I fulfil this Christian duty with special feeling as it is done by one soldier to a fellow soldier. Your son fell on June 16th 1915 about 3 kilometres east of  Ypres. According to what I remember of the day of the fight in which you son died the events were as follows.

It was on the 16th June at 2 a.m. that the English artillery suddenly began to shell our trenches north and south of the Ypres– Roulers road, from the small wood as far as Bellewaarde farm a murderous artillery fire had battered our trench forces, the English Infantry succeeded in penetrating into our trenches. I myself with the Battalion was then sent forward to strengthen the front trench garrison and recapture the lost ground.

The fight to capture the trench streamed backwards and forwards for a long time. Towards evening the last portion of trench was again in our hands.

In this section which I had captured with my platoon three fallen English soldiers lay close to each other dressed in the uniform of Highlanders. These in the night of 16-17 June were placed behind our trenches.

One of the fallen, according to the letter he had with him, was Corporal Bartlett. The tragedy which lay therein, namely that his father was saved from shipwreck, but that he had fallen after receiving the news from his Mother, made at the time a very deep impression on me.

This explains why in the course of many events of the long war I have never forgotten Corporal Bartlett. I can today see the three dead men before me. They were big fine men lying on top of the trench as if they were sleeping. There were no visible wounds on them. I cannot tell you how your son died, it must be supposed that he and his two comrades were killed outright through a bomb exploding in the neighbourhood.

Near by the bodies was also found an Oxford University circular, I picked it up on account of its contents and sent it to my parents with the two telegrams and letter.

I do not know to this day whether the Oxford University circular was your son’s or one of his comrades. Should it have belonged to your son I shall be glad to send it to you. In a sheltered spot close by the dead men lay a wounded English soldier. This soldier was carried back during the night to the casualty clearing station by our R.A.M.C. men. If I remember rightly however, this soldier was not wearing Scottish uniform.

You would like to have more detailed information concerning your son’s grave. I have marked the place where I found your son with a small cross in the enclosed map. At the spot outside the trench he was buried with his two comrades just as we also in the changing fight were forced to bury our comrades quickly not far from the trench. It was not until autumn of 1915 that my regiment went out to rest in order to lay out its own cemetery in Polygon wood. Your son, therefore found his last resting place where he fell in the fight for his country. For the soldier there is happiness, for his relatives, pain, because they do not know where he lies.

I scarcely think it probable that the grave is still marked. The fight before Ypres went on bitterly for such a long time and I doubt whether any of the graves in the immediate neighbourhood of the front remained recognisable as such.

I myself went away in January 1916 from the Ypres front to another war area. Since that time I have not been to Ypres and I do not know therefore whether the many graves are all preserved.

That is all that I can tell you of your son to whom I rendered the last service and whose letter and telegrams now find their way to his Mother in England.

The burial position is indicated with a cross at the top righthand side of Railway Wood. Dr Schwirzke has written the following – ‘Hier lagen die 3 toten eng. soldaten’. Translated to – ‘Here were the 3 dead English soldiers’. This is the position where the Doctor states the bodies buried 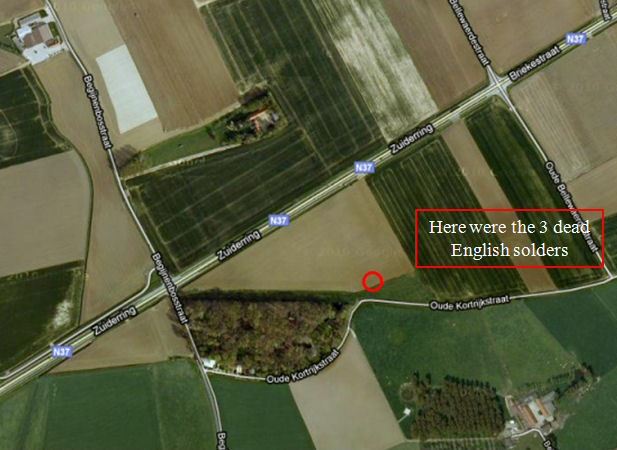 The telegram found in Bartlett’s pocket 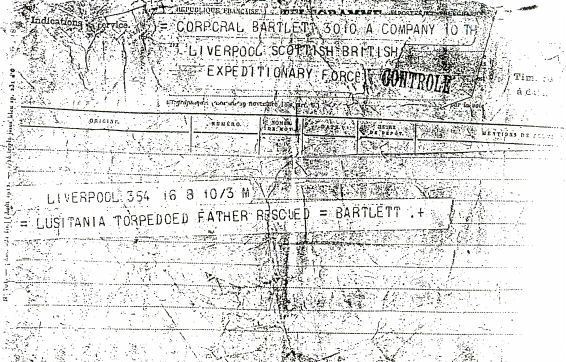 Read more: Memorial for the Fallen of the Battle of Bellewaarde