News has reached Argunners that the Danish Ritterkreuzträger SS-Obersturmführer Sören Kam has passed away on 23 March 2015 in Kempten, Germany. He followed his wife, Eleonore Kam, who passed away just weeks before. Sören Kam was born on 2 November 1921 in Copenhagen, Denmark. He became a member of the youth faction of the DNSAP (NSU) where he was a close associate of Christian Frederik von Schalburg. In June 1940 he volunteered for the Waffen-SS and went on to serve with the 5. SS-Panzergrenadier-Division “Wiking” on the Eastern Front.

In 1942 he was sent to the SS-Junkerschule Bad Tölz, succeeded and was promoted to SS-Untersturmführer before reaching the rank of SS-Obersturmführer in 1945. On 7 February 1945, Adolf Hitler had awarded Kam, company commander of the 1st Company in the SS-Panzergrenadier-Regiment “Germania”, the Knight’s Cross for “especially decisive action in the battle against the enemy” making Kam the third Dane to receive this award. Kam had been wounded in battle several times and for battlefield bravery been awarded the Iron Cross Second and First Class, the Infantry Assault Badge, Close Combat Clasp and the silver Wound Badge and that he had seen combat in the battles of Dnipropetrovsk, Kharkov, Cherkasy, Kovel and Warsaw.

According to the September 1943 issue of De frie Danske they proclaimed Kam and Flemming Helweg-Larsen as Schalburg-bandits and the murderers of newspaper editor Carl Henrik Clemmensen. 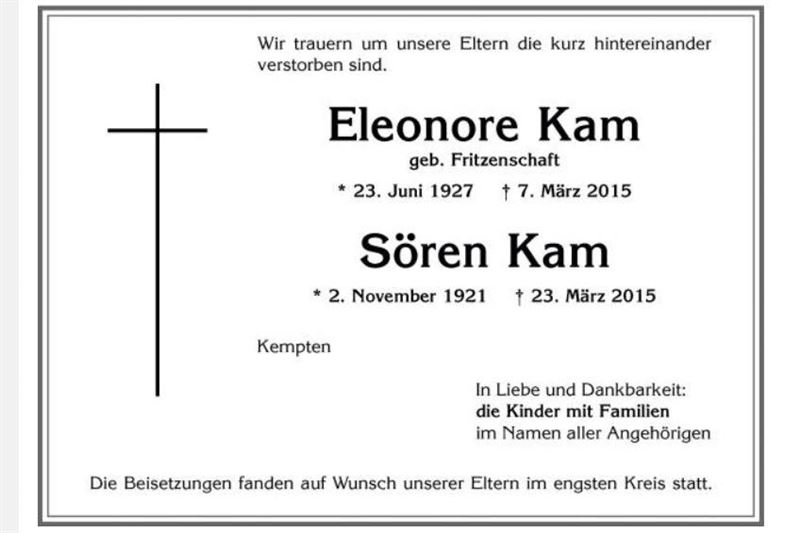