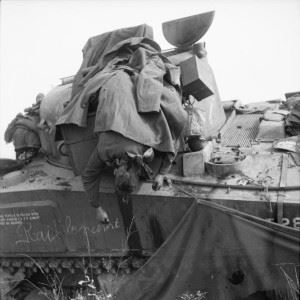 Squadron Sergeant Major William John Parkes of No. 3 Squadron, 2nd (Armoured) Irish Guards, killed when his Sherman tank was knocked out during the advance towards Eindhoven as part of Operation ‘Market-Garden’. Killed in action on 17 September 1944 aged 33, he was a native of Belfast, Northern Ireland and was later buried in Grave II.B.8 at Valkenswaard War Cemetery, situated approx 10kms south of Eindhoven and close to the Belgian border.