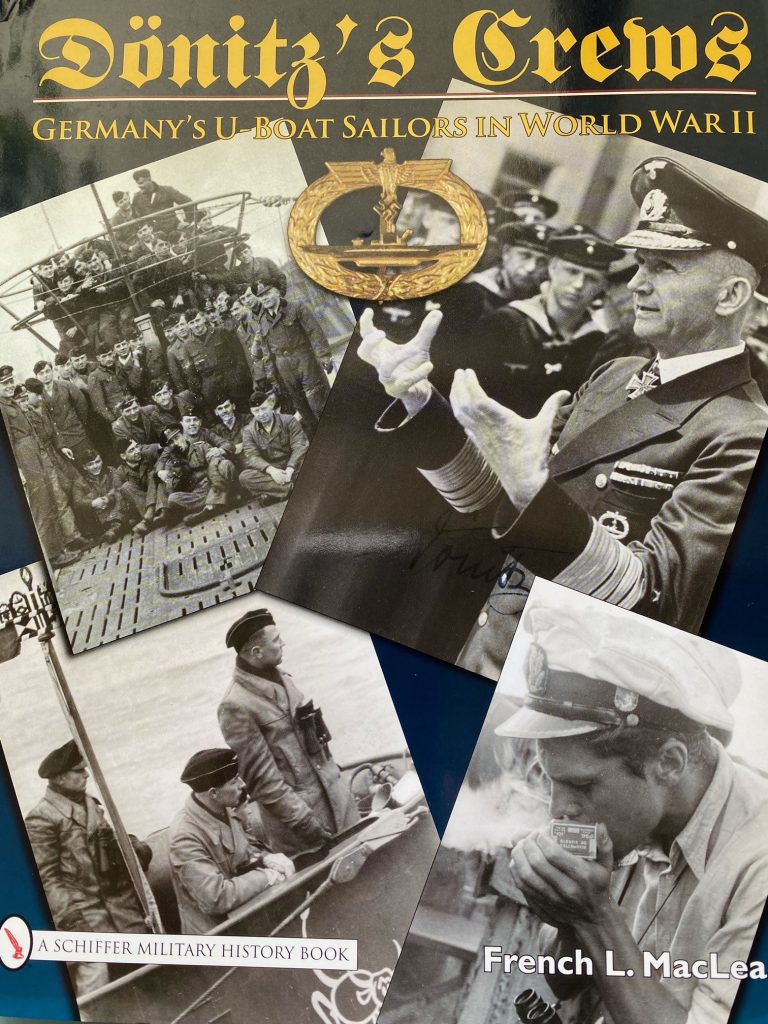 Being there . . . in March of 1943 to sail with the crewmen of Hitler’s U-boat “wolf packs” as the
Battle of the Atlantic reaches its climax. During that tortuous five-day fight above and below
the freezing waters, the German Navy (Kriegsmarine) sank 21 Allied ships in a single convoy
attack, although the Fuhrer would soon lose the seas of Northern Europe and the
Mediterranean due to innovative Allied ocean-fighting technologies, measures, and counter-
measures . . . .

LIFE AND DEATH UNDER THE ATLANTIC AS THE SUBMARINE CREWS OF GROSSADMIRAL KARL
DONITZ’S SAIL TO SINK OUR ALLIED WARBOATS AND BRITAIN-BOUND LIBERTY CARGO RELIEF
SHIPS
Reviewed and highly recommended by Don DeNevi
“DONITZ’S CREWS – Germany’s U-Boat Sailors in World War II”, by French L. MacLean. A
Schiffer Military History Book, Atglen, PA: 2009, 333 pages, hc; $69.99. See:
[email protected], or www.schifferbooks.com.
Sure, Grand Admiral Karl Donitz’s U-boat sailors, covered with medals and loaded with award
documents, enjoyed two “happy time” periods between September 1, 1939, the outbreak of
World War II, and February 1943. For almost four years they wracked up huge gross-tonnage
losses of Allied shipping and cargoes, to say nothing of human lives, due to the absence of
combined American-British tactics, technology, personnel, and operations. Shipping was
Britain’s lifeblood, and, by late 1942, it was on the brink of being severed.
Hitler and Nazi sycophants, Admiral Erich Raeder, CinC of the German Navy from 1928 to
January of 1943, and Donitz, the ardent Nazi who would succeed Hitler as head of state on May
1 st , 1945, were absolutely convinced they had won the Battle of the Atlantic. After all, they had
introduced new and advanced torpedoes; larger, deeper, faster, greater distancing Type 1X
submarines; and upgraded precious “Milch Cows” (trailing noncombatant oil and supply U-
boats); new crops of commander strategists and better trained aces and crewmen; more
accurate surface artillery and magnetic shells (and mines); improvements of aging underwater
radar, etc. Furthermore, with battle actions in the Far East Pacific, and off the coast of North
Africa, a virtual thinning of American and British surface and air submarine hunters seemed to
be taking place. German sailors and their officers were jubilant.
Yes, Hitler and Donitz (Raeder had been fired) concluded Germany’s wolf packs and the rest of
the Kriegsmarines’s heavyweights ruled the waves of the Atlantic and European seas, finally
allowing the Fuhrer to turn his full attention to battling the Russians to the bitter end. But, in
reality, Germany was gradually losing the war on all fronts. In short, the Battle of the Atlantic,
on the surface and underwater, was not over. By the pivotal month of May 1943, “Black May”
to the U-boat sailors who survived WWII, the Allies had defeated the German Navy by
perfecting anti-submarine techniques.

Now, thanks to the brilliant foresight of provident publishing, as well as distributing the best
books of international military publishers, WW II buffs are presented a masterwork, “Donitz’s
Crews — Germany’s U-Boat Sailors in World War II”. With dozens of historical documents and
almost 500 photographs, author French L. MacLean not only provides a first of its kind
comprehensive history of U-boat crews and the undersea war in and around the “happy times”,
but also gifts those of us with moderate curiosity, or solid interest in the underwater war with
U-boat related issues, successes, and defeats, tracing many engaging in battle to specific
numbered, or named, boats. Reading actual reports of what those boats and crews
accomplished, and, thankfully, failed to accomplish, gathered from the nonpareil research by
French MacLean, grants us via 333 pages of priceless hours to not only peruse half a thousand
crystal clear black and white photos, but also honest military literature.