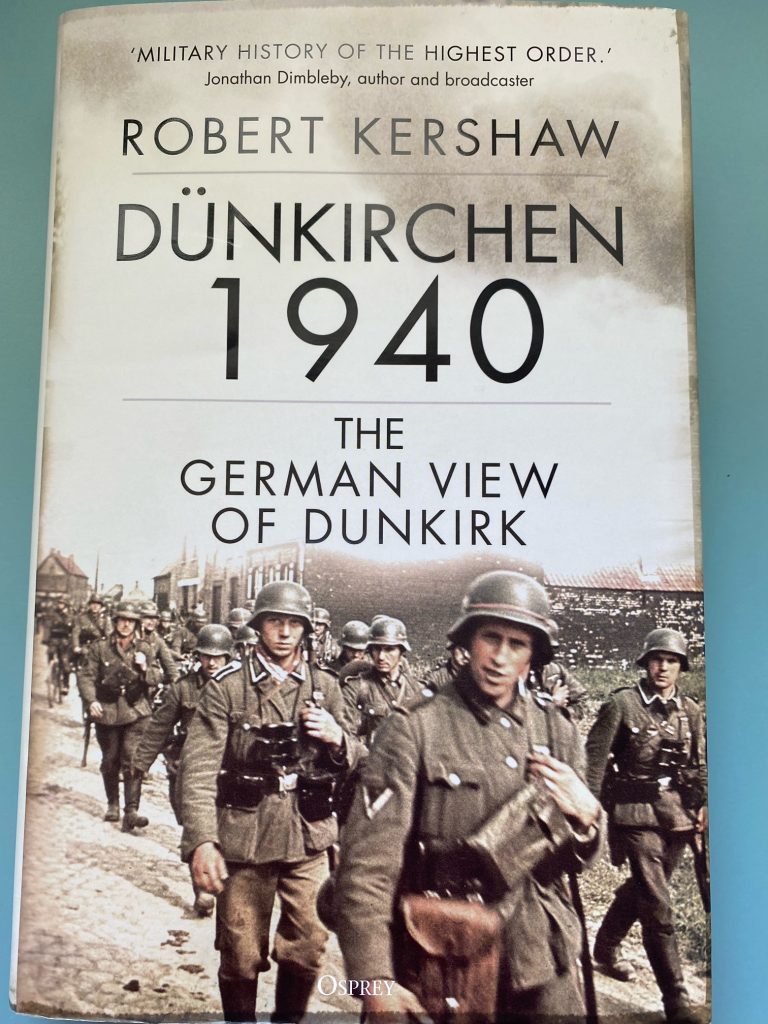 Being there . . . . May 26, 1940, at the bottom of a ditch alongside British Field Marshal Viscount
Alanbrooke and his aide overlooking the beaches of Gravelines, Dunkirk, La Panne, and Ostend
as German fighters and bombers fly low altitudes strafing and bombing attacks on the
thousands upon thousands of B.E.F. British Expeditionary Forces, French and Belgian Armies,
lined up waiting to embark on any imaginable boat that can get to them for departure to Dover,
within eyesight, across the North Sea English Channel. Like the C-in-C next to you, Churchill’s
most trusted commander, it is turning out to be the most arduous day of your life. The situation
is crystal- clear, countless German panzers have broken through the Dunkirchen perimeter, and
soon capture or death is inevitable. But like this great hero of the British Empire, Lord
Alanbrooke, an exceptionally able soldier, you’ll be damned if you’ll reveal your strains and
stresses, fears and anxieties, under heavy bombardment . . . .
OSPREY PUBLISHING OFFERS THE FIRST MAJOR HISTORY TO UNCOVER AND REVEAL THE
GERMAN MILITARY PERSPECTIVE OF WHAT REALLY HAPPENED AT DUNKIRK
Saturday, June 1, 1940 – THE DAILY MIRROR – London evening-edition headline:
“B L O O D Y M A R V E LL O U S ! !”
For days past our brave men of the B.E.F. have been pouring through a port somewhere in
England, battle-worn, but thank God, safe and cheerful despite weariness. We may hope that
already at least half of that gallant force has been withdrawn from the trap planned for them by
Nazi ruthlessness.
Throughout this operation – always one of the most dangerous and difficult in the art of war

“DUNKIRCHEN 1940 – The German View of Dunkirk”, by Robert Kershaw. Osprey Publishing,
Bloomsbury Publishing Plc: 2022, 352 pages, hc; $30. Visit, www.ospreypublishing.com, or
Email: [email protected]
As supreme military commander, Hitler had supposedly mastered the art of military
miracle-making during the swift capitulations of Holland and Belgium, although less than a
dozen miles on the outskirts of Dunkirchen, the only port through which the trapped British
Expeditionary Force might escape, the panzers were ordered to halt abruptly. For some reason
the Fuhrer froze the encirclement and capture of the congested Allies waiting to board anything
that floated. To this day, a detailed interpretation of the German perspective of what happened
during four those frightful days has never been published. Historically lacking, it can provide
answers as to why “GOD”, as Hindenburg often referred to him, halted the Panzer armies.
General Heinz Guderian didn’t approve of such stupidity. Lack of fuel? To appease, nay, curry
favor with Churchill so he would later surrender the British Isles and their people to him
without a fight? Because the 300,000 number of enemy troops getting away was insignificant
compared to his multi-masses already gathering to invade England?
Drawing on his own military experience, his German-language skills, and his historian’s eye
for detail, Robert Kershaw creates a new history of this famous battle which delves into the
under-evaluated major miscalculations of the Germans, both strategically and tactically, that
ultimately, arguably, cost Hitler World War II.
By the first of January, 1945, when it was obvious to the OKW and OKH remaining intelligent
military leadership staffs that Germany was kaput, and Hitler on his way to being captured and
tried for was crimes, or found himself burning alongside that of poisoned Eva and their beloved
Blondi in a ditch outside the Fuhrerbunker in the Chancellery garden, commanders at all levels
began to openly admit, only among themselves, that they harbored second thoughts at the end
of the western campaign in 1940 after almost all the British got home. At first, Hitler, like most
of his entourage, felt the BEF was in a state of utter exhaustion and utterly worthless. Having
left all their equipment behind, those 300,000 troops would have to be decamped. And, after
all, 50% of the Nazi forces that chased the British down to the Dunkirk coast never saw any
action at all. All were pleased that the Fuhrer himself had been stirred by his own “great
success.” Thus, the British armies had no relevance for him. As for his own troops, nearly all
were relieved that their Fuhrer had booted Churchill and his gang off the continent. Now,
ordered East, they would finally return to cross the English Channel once the Soviet Union was
dissolved, to ensure Stalin was lined up against some back-alley wall and shot to death.
“Military history of the highest order”, writes Jonathan Dimbleby, British author and
broadcaster. “An abundance of vivid personal memories, woven deftly in a clear narrative,
make for truly gripping read.”