The grassroots movement in 1952 to make Dwight D. “Ike” Eisenhower president of the United States had a winning slogan, “I like Ike,” that carried the World War II general to the White House, not only because he had proven his leadership ability during the planning of the Normandy invasion, but also because he genuinely was likeable. But that amiable nature did not mean that when he was in the military, Ike was oblivious to the arrogance of other generals.

Eisenhower was not the only one to find Douglas MacArthur, the Supreme Commander of the Allied Forces in the Pacific, a vexation to the spirit. He admired MacArthur’s brilliant grasp of military strategy, but loathed his vanity and tendency to opt for flourishes in his behavior. He once wrote, “I just can’t understand how such a damn fool could have gotten to be a general.” In the beginning, it was MacArthur who was top dog and Eisenhower, who served as an assistant to MacArthur in Washington D.C., who was subordinate. 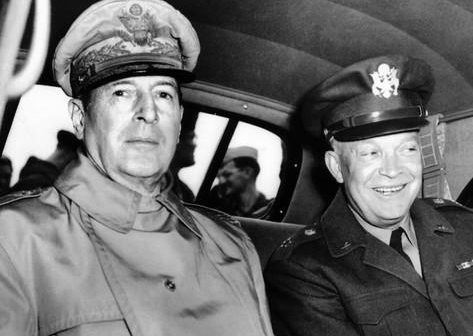 The famous incident involving the veterans of the Bonus March in 1932 revealed to Eisenhower both MacArthur’s disregard for a higher authority and his determination to follow his own agenda.

That’s not to say that Eisenhower didn’t also have ideas which clashed with the military hierarchy. After Eisenhower paired up with George S. Patton, Jr in 1920 to publish articles suggesting that the U.S. Army ought to have a better plan for using tanks in future wars so that the stalemate of trench warfare from World War I could be avoided, the military authorities warned him that if he proceeded to challenge the existing policy on infantry warfare, he’d face a court martial.

The memory of World War I seemed to fade as Americans were forced to deal with a treacherous new enemy when the stock market crashed in 1929. The rampant unemployment of the Great Depression had hit the nation hard. But some World War I veterans believed that the bonus they had been promised by Congress for their service would ease some of the burden. The veterans headed for Washington D.C. and called themselves the Bonus Expeditionary Forces.

Douglas MacArthur, serving as Army Chief of Staff, believed the march was part of a communist plot to sabotage the federal government, despite intelligence to the contrary.  The veterans were determined to stay in their encampments until the bill to grant them their bonus was passed. But as the number of veterans in the camp increased to 20,000, the prospect of tension heightened. The House of Representatives passed the bill, the Senate voted it down.

When the police were instructed to evacuate the veterans, President Herbert Hoover sent in the army to clear the camps. MacArthur accompanied the troops although Eisenhower had advised against it. Violence ensued and hundreds were injured. But Hoover didn’t want the troops to pursue the marchers past the Anacostia River but his instructions fell upon intentionally deaf ears.  MacArthur told Eisenhower that he was too busy and didn’t want to be bothered by people pretending to bring orders. So he sent his soldiers over the bridge despite the President’s instructions. The veterans were subdued by bayonets and gas; then fire broke out in the camp and within four hours, the veterans were driven out.

MacArthur’s insistence upon following his own agenda would follow him throughout his career. But that was in the future. No one yet knew that the pupil would surpass his master or that Eisenhower’s adroit skill at handling people would eventually prove more integral to the success of World War II than MacArthur’s undoubted martial acumen. But as a subordinate, Eisenhower’s effectiveness attracted the attention of his superiors, which was his intention. “My ambition in the Army was to make everybody I worked for regretful when I was ordered to other duty,” Eisenhower wrote, explaining the work ethic that defined him. MacArthur valued his so much that he insisted on having his aide join him as chief of staff in 1935 when MacArthur served in the Philippines. The mission was to bolster the defenses against the threat of Japanese attack. But the division between the two generals over how to create an army in a developing country still suffering from poverty and the nature of leadership would encompass more than their time in the Pacific.

Shortly after the Japanese attack on Pearl Harbor, Eisenhower was asked for a plan to defend the Philippines against Japan. Eisenhower was realistic. His suggestion was for MacArthur to hold out as long as he could in order to allow the United States to build an operational base in Australia; the Philippines, he predicted, would not be able to hold out against the superiority of the Japanese.

MacArthur would go on to serve in Japan as Supreme Commander for the Allied Powers, helping to transform Japan from an imperialist society into a fledgling democracy. But it would be his actions in Korea, not Japan, that would be his undoing. When he refused to confine his military decisions to the boundaries set by his commander-in-chief, feisty President Harry S. Truman had had enough of the high-handed general.  Years later, Truman explained his reasoning.  “I fired him because he wouldn’t respect the authority of the President. I didn’t fire him because he was a dumb son of a bitch, although he was, but that’s not against the law for generals.”

In 1952, Dwight D. Eisenhower would succeed Truman as president, serving two terms and proving that people really did like Ike.