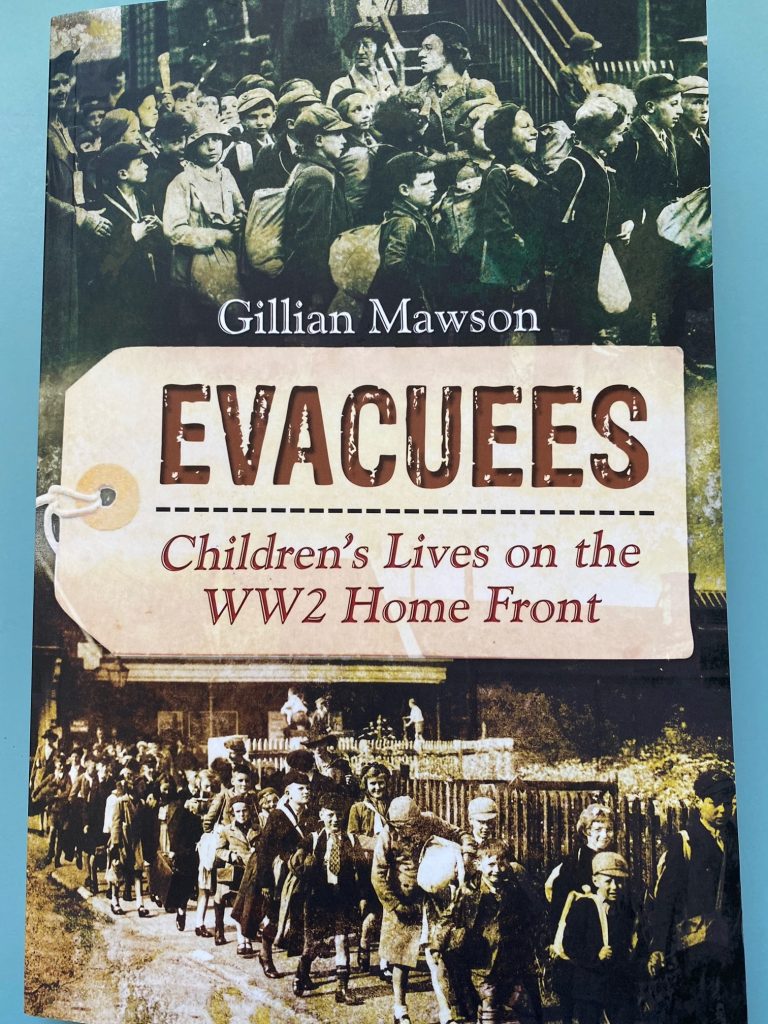 Being there . . . . on September 1, 1939, when the first evacuations of British children,
expectant mothers, and the disabled began from the large cities across the Isles. Although not
officially at war, night blackouts were imposed, streets left unlit, public entertainment shut, and
not a sliver of light was allowed to be seen from homes, shops, businesses, or offices in case the
German Luftwaffe, searching for targets, bombed them. The gas masks that had been issued a
year earlier were to be dusted off and carried everywhere one went. The people of Britain
knew war was on its way across the English Channel. More than a year and half before, the
population, in its way, began preparing as the government under Prime Minister Neville
Chamberlain dallied, sincerely believing diplomacy and appeasement would maintain peace . . .

BY MID-1945, THE MOMS OF THE EVACUATED CHILDREN FROM LONDON AND OTHER LARGE
CITIES BEGAN PREPARING PLAQUES FOR BRITAIN’S ACROSS-COUNTRY SMALL TOWNS AND
VILLAGES WHICH READ, “WHEN THE BOMBS CAME, WELCOME WAS MADE HERE FOR OUR
BOYS AND GIRLS WITH LOVE AND KINDNESS NEVER, NEVER, EVER, TO BE FORGOTTEN”

Two days later, on September 3 rd , Britain was at war. Yet, for several weeks, daily life was
virtually indistinguishable from that of August 31 st , the day before the invasion of Poland. In
brief, life on the home front had its own somber responsibilities. With their men in the forces,
women had to replace them, dealing with the usual problems and concerns, i.e., rationing, long
work hours, night fire-watching duties, and worried sick about the bombs certain to come. But
at least the children were on their way to safety and security. Where? No one knew for certain;
with whom, moms could only hope and pray for the best. They would have to wait until their
children mailed preprinted postcards sent home providing their new addresses and provider’s
names. War without bombs just then was nonetheless affecting everyone. All that a mom could
do at work, then, at home, awaiting the arrival of the mail, was to smile bravely . . . .
Reviewed and highly recommended by Don DeNevi
“EVACUEES — Children’s Lives on the WW2 Home Front”, by Gillian Mawson. Pen & Sword
HISTORY, Pen & Sword Books Ltd: 2014, reprinted 2021, 192 pages, sc; $29.95. Visit, www.pen-
and- sword.co.uk.
In September 1939, over 3,000,000 people were evacuated from London alone,
accompanied by another million from the Channel cities believed in the paths of Hitler’s
invasion forces from France. “Operation Pied Piper” was the largest transportation of people
across Britain, the Islands had ever known, virtually all moving into the countryside being
children.
Gillian Mawson, a social historian, has spent years collecting the stories of former evacuees,
resulting in her most appreciated book which includes the memories and photographs of over a
hundred, each with his or her own problems. These accounts, almost all previously
unpublished, reveal what it was like for each to settle into a new home with strangers. Most

found everlasting love, sincere caring, gentleness, patience, coupled with devoted guidance,
friendship, and responsibility, while, tragically, some endured ill treatment. This rarely tackled
topic didn’t faze or daunt Gillian who earnestly studied and elaborated her research upon it.
Her fine work provides readers with insights into the realities of wartime life and a valuable
record of a unique moment in British wartime history. “Family Tree Magazine” praises, “Gillian
Mawson’s superb book offer a unique insight into the evacuation experience from the minds
and voices of those still alive who lived through it. Her fierce determination led her to get the
stories before they were lost forever to British history. The breadth of the children’s
experiences touched upon is extraordinary.”
However different, all the stories in this book underline one thing: there is so much more to
the story of evacuation during that horrific Nazi war than the images of children arriving at
railway stations, clutching gas masks, and with labels tied to their coats, which have entered
the popular imagination. Gillian writes, “Hopefully, my book with its combination of stories and
family photographs will paint an intimate picture of the different ways in which the British
people opened up their homes to evacuated children and adults during those dark days.”

“Civil Defense — WOMEN URGENTLY WANTED FOR E V A C U T I O N  S E R V I C E – – Offer Your
Services to Your Local Council, or Any Branch of Women’s Voluntary Services” – – Women’s
Voluntary Service Recruitment poster, September 1939.
“HELLO, my – son or daughter’s name___________
How are you, My little
EVACUEE?
Enjoying being billeted by the sea?
I love your letters,
Please do send others, Love and
Kisses from your mommy.”
8 th June 1946
To-day, as we celebrate VICTORY, I send this personal message to you and all
other boys and girls at your home school. For you have shared in the hardships and dangers of
a total war and you have shared no less in the triumph of the Allied Nations. I know you will
always feel proud to belong to a country which was capable of such supreme effort; proud, too,
of parents and elder brothers and sisters who by their courage, endurance, and enterprise
brought victory. May these qualities be yours as you grow up and join in the common effort to
establish among the nations of the world unity and peace.
Letter sent by the King in 1946 to the children of Britain