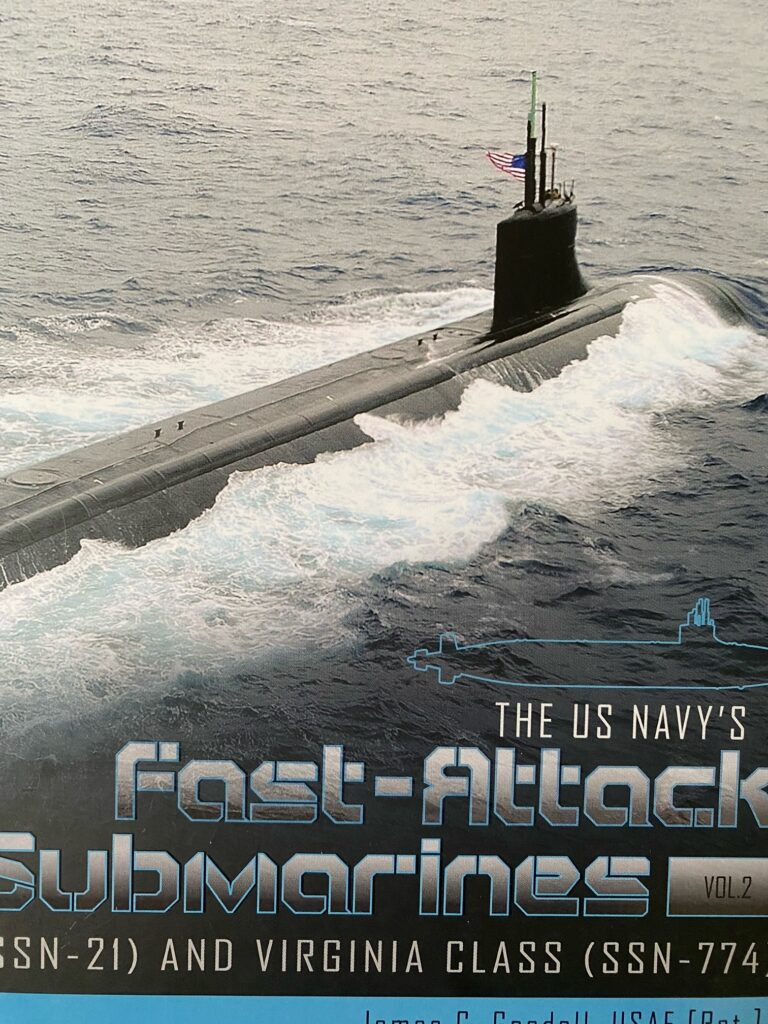 Being there . . . . if you’ve never boarded one of our USN’s fast-attack submarines, i.e, a Seawolf
Class (SSN – 21) or Virginia Class (SSN – 774). Not to fret! Schiffer MILITARY Publishing, Ltd.
(Who else?) will escort you through one of the truly extraordinary pictorial historical tours of
your life! Ah, that is if you can’t control your curiosity, and your fledgling military mind
demands assurance no Soviet-Red Chinese-North Korean combo will ever out nuke our
carefully prepared defensive and retaliatory measures. Meet a few of our well-guarded sailor
geniuses at work. Come, friend-citizen-taxpayer, learn for yourself whether Lt. Chester Nimitz’s
prophesy in 1912 was correct. Our future, and beloved, US Pacific Fleet admiral and
commander in World War II, and post-war Chief of Naval Operations and Special Assistant to
the Secretary of the Navy, said in his usual calm, quiet manner, “The steady improvement of
the torpedo together with the gradual improvement in the size, motive power and speed of
submarine craft of the near future will result in a most dangerous offensive weapon, and one
which will have a large part in deciding fleet actions.”
“HEY, NAVAL-MINDED BUFF! BOARD (VIA 530 CRYSTAL-CLEAR COLOR IMAGES) THE ONCE
SUPER-SECRET US NAVY’S FAST ATTACK SUBMARINES SEAWOLF CLASS (SSN-21) AND VIRGINIA
CLASS (SSN-774)
Reviewed and highly recommended by Don DeNevi
“THE US NAVY’S FAST-ATTACK SUBMARINES, Seawolf Class (SSN-21) and Virginia Class (SSN-
774) – Volume 2”, by James C. Goodall, USAF (Ret.), Foreword by RAdm. Gus Gustavson, US
Navy (Ret.). Schiffer MILITARY Publishing, Ltd: 2920, 176 pages, 12”x 9”, 530 color images,
hardcover; $34.99. Visit, www.schifferbooks.com for further information including that of
Volume 1 which focuses upon the first fast-tracks, the US Navy’s Los Angeles class forerunners
to the Seawolf and Virginia class.

Successors to the US Navy’s Los Angeles class fast-attack submarines (presented in volume
1), the Seawolf and Virginia class SSNs are presented here from their initial design and
construction, through testing and trials, to operational levels. From its debut in 1997, the
nuclear-powered Seawolf (SSN-21) represented the lead ship of the deadliest submarine ever
to be constructed for the USN during the Cold War.
With the end of the Cold War, the Seawolf-class SSNs were limited to the three that were
under construction at the time, and the program was terminated. With only three in the class,
the supersecret USS Jimmy Carter (SSN-23) is still virtually off limits to all photography. Author
Jim Goodall’s unprecedented access onboard a Seawolf class – the USS Connecticut – was a first
for the Navy and provides exclusive coverage found only in this text. In place of the Seawolf
class, the Virginia-class attack submarine was an advanced stealth, multi-mission nuclear-
powered submarine for deep-ocean antisubmarine warfare and littoral (shallow water)
operations.

If you purchase this, you absolutely must own Jim’s Volume 1, the Los Angeles Class 688. The
author’s unprecedented access will allow you to enter a sanctity even high-ranked officers are
unallowed. In some books such as this, minor details of the boats’ armament are allowed to
now be viewed: four 21” bow mounted torpedo tubes supporting the Mk. 48 ADCAP torpedo
series – Tomahawk (BGM – 109) cruise missile; and the Harpoon (UGM – 84) anti-ship missile
capability. Virtually all the mesmerizing photographs will ignite more cravings for additional
“secrets”, and, if allowed to be shared, it’ll be Schiffer who will bring them to you thanks to
good men like Jim Goodwill.