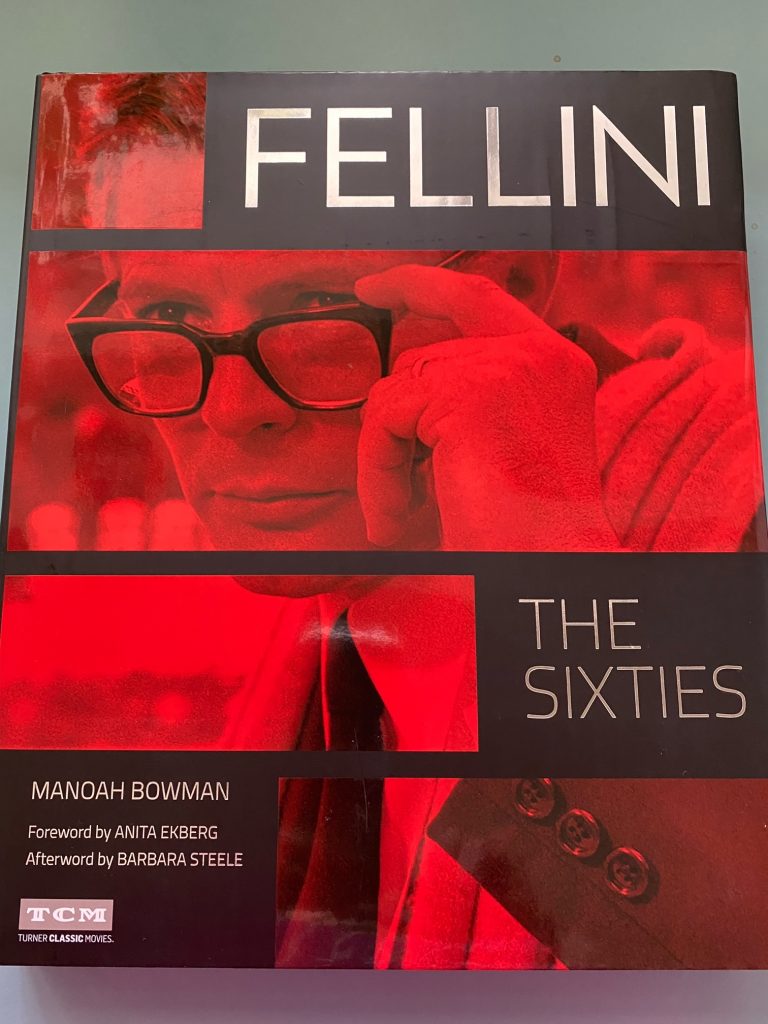 Being there . . . . in 1963 with Federico Fellini, the Italian feature-film director, in Rimini, Italy,
his birthplace, with family and friends, as he celebrates his 43 rd birthday. Already, he is widely
heralded by both America’s great producer-directors and ordinary feature-film buffs as one of
the world’s most original, skilled, and beloved “novelists with a camera”. Meet other famous
attendee filmmakers, Italy’s Antonioni, India’s Ray, Poland’s Wajda, France’s Resnais and
Truffaut, etc. . . . .
HANDSOME NEW COFFEE TABLE-SIZED TCM BOOK CELEBRATES FELLINI AT THE CORE OF
EUROPEAN CINEMA
Reviewed and highly recommended by Don DeNevi
“FELLINI – THE SIXTIES”, by Manoah Bowman, Foreword by Anita Ekberg, Afterword by Barbara
Steele. Running Press-Perseus Books Group: 2015, 10 1/2” x 11 1/4”, 303 pages, hc; $65. Visit:
www.runningpress.com

In his superb article, “A Religion of Film”, TIME, September 20, 1963, critic Brad Darrach wrote,
“Imagination minus taste – in “I Vitelloni” (1953), he put together a conventional but faultless
social satire. In “La Strada” (1954), a poetic comedy, he followed in Chaplin’s footsteps but
couldn’t quite fill the little fellow’s shoes. In “La Dolce Vita” (1960), the film that made him and
actor Marcello Mastroianni famous around the world he constructed a spectacular travesty of
the Apocalypse in which the prophecy is luridly fulfilled and Rome, the Great Prostitute of
Revelation, wallows gorgeously through seven nights of destruction. In “8 ½” (1963) his most
daring film to date, he aimed his camera into his own psyche and let it record his fears and
fantasies, desires and despairs in a cinematic language that owes more to Joyce than it does to
D.W. Griffith.”
Brad’s point, of course, is that all these extraordinary features were shot with vivacity,
challenge, courage, and good old Italian gusto – proving to the Master of Them All, Akira
Kurosawa, that was a force to reckon with, a rival without a Japanese sword. In his brilliant
piece, Brad Darrach argues that unfortunately Fellini’s imagination is not controlled by taste.
“He panders incessantly and shamelessly to the public letch for sensations. He is a vulgarian in
the grand manner, the Barnum of the avant-garde.” As for this simple reviewer who walked
into the darkness with a box of popcorn in hand, he was unaware what to expect in “8 ½” and
“La Dolce Vita”. Emerging into the sunlight after more than 2 hours later for each, he still yearns
for that man, a piece of the sun himself, to have devoted his energy and time, the money to
produce, that heart-endearing gentleness to have made MORE films such as his truly great “La
Strada” and “I Vitelloni”. If I had known him when he attended Bologna University, or began his
career as a cartoonist, journalist, and scriptwriter, I would have said, “Senti, listen, my friend,
sure, ‘La Dolce Vita’ will win you a top prize at the Cannes Film Festival as a “. . . success de
scandale” for its cynical evocation of modern Roman high life. But it is the love and warmth of

your wife Giulietta Masina in ‘La Strada’ and makes us cry, then cry again for film as the most
emotionally powerful of all Mankind’s arts and humanities”.
Author Manoah Bowman, a photograph, writer, and the proprietor of the independent Visions
Archive, a unique collection of imagery, ephemera, and original camera negatives now housed
in the Academy of Motion Pictures and Television, has given us a truly magnificent gift, one that
should never be absent from the living room coffee table. Visiting family and friends should be
introduced to Federico Fellini, come to know the meaning and imagination of the man, watch
his work that shows it, then decide for themselves his nature, lessons, and the incredible art
born of his mind translated into celluloid.