Experience a flight in a classic Second World War fighter, in formation with other historic combat aircraft, including the Avro Lancaster or simply said fly amongst the legends. Warbirds fans will have the time of their life thanks to the opportunities of Vintage Wings of Canada and Canadian Warplane Heritage Museum. 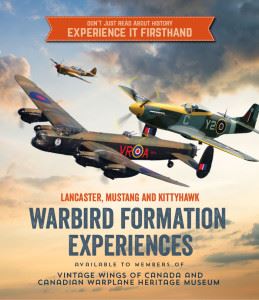 Ever wanted to be up in the back seats of a North American P-51D Mustang or Curtiss P-40N Kittyhawk and fly in formation with or inside one of the rarest yet most important aircraft in aviation history – the beloved “Lancaster”? Now is your chance.

“We can state, with 100% certainty, that this opportunity cannot be experienced anywhere else on the planet.”

As they are now offering member-sponsored flight experiences in a series of five multi-day events (three in Ottawa/Gatineau and two in Hamilton, Ontario) you will be able to strap on history on following dates:

A total of six seats are available for sponsorship on each flight-four in the Lancaster and one each in the escorting fighter aircraft. The price is $3,000 (CDN) for each seat (in a fighter or aboard the Lancaster) which helps them to cover the costs of maintenance and operational consumables like fuel and oil. And for the real fans, the P-51 and P-40 fighter flights may be extended, at the sponsor’s option, ofcourse for an additional fee. Also note that you first need to become a member of Vintage Wings of Canada or Canadian Warplane Heritage Museum for an annual membership of $125 (CDN).

What are you waiting for?