Freely I Served is a remarkable combat memoir by one an underappreciated World War Two commander. Stanislaw Sosabowski served as an officer in the Polish Army for over twenty years and led an infantry brigade in the defense of Warsaw at the beginning of WW2. After receiving orders to surrender to German forces besieging the city, he went into captivity in late September 1939. Sosabowski subsequently escaped and coordinated support for the Polish resistance until ordered to depart for France to provide leadership to the military forces assembling under the command of the Polish government in exile. He trained the 4th Polish Infantry Division during the “phony war” between the fall of 1939 and May 1940, when Germany invaded Western Europe. The 4th Infantry Division relied on the French for much of its armament and equipment and found itself equipped with out of date equipment. As the Germans overran France, Sosabowski led his men to the coast and oversaw their evacuation to England.

Once in England, Sosabowski set about reconstituting his forces. Originally attempting to form a new division with volunteers of Polish descent, he soon found that he only had sufficient troops to establish an independent brigade. Through a combination of his vast experience and determination, Sosabowski fashioned his brigade into an airborne formation. He led his unit from the front, completing parachute training at the age of 49. By 1942, the brigade was combat-ready and designated the 1st Independent Parachute Brigade. The Polish Government in Exile intended to use the Brigade as a spearhead in the liberation of Poland, and thus the unit was not available for operations in other theaters. The British wanted to incorporate the brigade into its own parachute forces, but Sosabowski resisted the attempts for almost two years.

In 1944 the Polish Government in Exile sought to use the Brigade to support the Warsaw uprising but could not arrange Allied support. Instead, the Poles agreed to allow the brigade to be used in conjunction with British and American airborne troops during Operation Market Garden, the Allied attempt to drive through Holland and over the Rhine River into Germany. The operation failed when ground forces failed to link up with parachute units seizing vital bridges before German defenders could counter-attack in force. The 1st Independent Parachute Brigade dropped to reinforce the British 1st Airborne Division at Arnhem. The Brigade made multiple attempts to cross the Rhine River from their initial positions in the vicinity of the village of Driel but were unable to force a crossing, beyond a small force that ultimately served to cover the retreat of the British paratroopers back across the Rhine. The Brigade suffered significant casualties during the operation.

Sosabowski found himself blamed for the failure of Operation Market Garden by British commanders, even though his men performed valiantly as a small element of a much larger plan. In reality, the Germans had gained the upper hand in the battle before Sosabowski’s brigade being committed to the fight. Despite this reality, the Poles relieved Sosabowski of his command. After the war, he remained in England, ultimately joined by his wife and son, where he lived a life of relative obscurity.

Sosabowski’s memoir is powerfully written and the reader gets a real sense of his love of country and concern for his men. As a commander, Sosabowski strove to preserve his brigade’s independence as a symbol of Poland rather than just an augmentation force for the British airborne. He gained a reputation of being stubborn and inflexible, but these traits appear necessary when considered from the Poles’ point of view. The German invasion of their country precipitated the Second World War, but the Allies consistently subordinated Polish interests to the goals of the major powers of England, the United States, and the USSR. Sosabowski’s Brigade was just a small pawn in this larger struggle to control the Allied agenda. His memoir makes it clear that his men deserved better for the sacrifices they made in the cause of freedom. 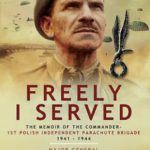 2 thoughts on “Freely I Served: The Memoir of the Commander, 1st Polish Independent Parachute Brigade 1941 – 1944 by author Stanislaw Sosabowski”