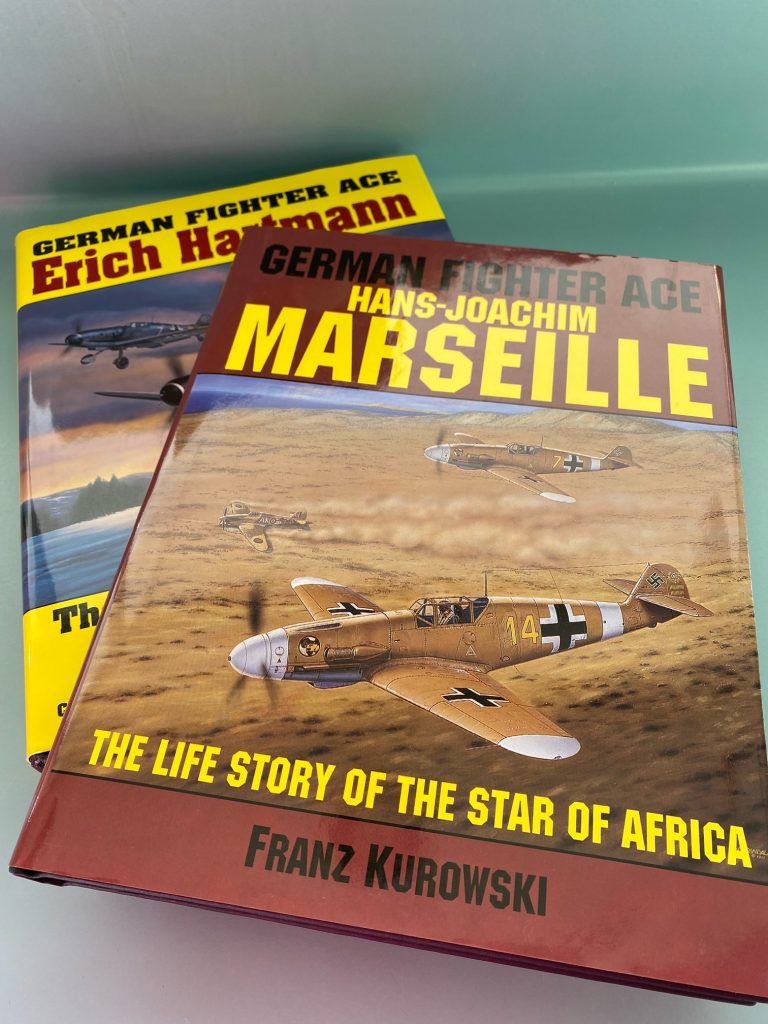 Being there . . . to fly at the razor-thin edge separating life from death, experiencing the enemy
pilot’s waves of energy, exhilaration, and, yes, unadmitted fear; to reluctantly recognize the
achievements of the enemy Luftwaffe; to develop greater insight into the cultural and war
thinking mentality of Nazi Germany; to pilot many of the different kinds of aircraft the top
enemy pilots flew right up to the final day of World War II in Europe; and more – – such are the
reasons to read via the two engrossing illustrated biographies listed below of Germany’s better
known successful combat pilots to rise through the ranks of Hitler’s newly created aviation
programs. Read with open, admitted curiosity and interest the remarkable life-stories of
German fighter aces, Hans-Joachim Marseille, and Erich Hartmann. Both, as virtually all the
other highly selected Luftwaffe aviators, including beloved Hanna Reitsch, the most celebrated
woman of the Third Reich, eagerly accepted or excitedly volunteed for the more dangerous
flying assignments. Of course, all flew to fill their own needs of achievement and honor, and,
yes, to obediently serve their Fuehrer and the Fatherland. . . . Important war memoirs,
biographies, and general literature from the enemy’s points of view and perspectives are
inordinately rare. These two German life stories, accompanied by hitherto unpublished
personal photographs, exceptionally chart the perilous world of aerial combat in authentic,
splendid, nay, epic writing to advance insight . . . . making them even more unusual, but
perfect, Christmas gifts certain to be most welcomed by the serious Second World War buff.

KNOWN AS “THE ALLIES’ SKY-HIGH HEROES”, OUR VICTORIOUS WWII PILOTS OVER BRITAIN,
EUROPE, AND THE MEDITERREAN WERE THE FIRST TO ADMIT THEY HAD NO MONOPOLY ON
VALOR DURING THE AIR COMBAT – – THEIR SKY RIVALS WERE OFTEN JUST AS DARING, HEROIC,
COURAGEROUS, AND GALLANT – As these two Schiffer Company republished books testify
Reviewed and Highly Recommended as Christmas Gifts by Don DeNevi
“GERMAN FIGHTER ACE – ERICH HARTMANN, The Life Story of the World’s Highest Scoring
Ace”, Photo Selection & Commentary by Ursula Hartmann/Introduction by Manfred Jager/
Translated from the German by James C, Cable. Schiffer Military History, Schiffer Publishing Ltd:
296 pages, hc, 9” x 11 ½”; $59.99. Visit, www.schifferbooks.com.
“GERMAN FIGHTER ACE – HANS-JOACHIM MARSEILLE, The Life Story of the Star of Africa”, by
Franz Kurowski, Translated from the German by Don Cox. Schiffer Military History, Schiffer
Publishing Ltd: 233 pages, hc, 9” x 11 ½”; $49.99. Visit, www.schifferbooks.com.
In “ERICH HARTMANN”, the hardcover, as well as the fighter pilot himself, we have WWII’s
highest-scoring, most successful ace on either side. He was active over Belorussia and Kursk and
continued shooting down the planes of the Allies right to the very end, 9 May 1945, VE Day. The
Germans credited him with 352 victories, but the British and American officials only cited 263.
“What makes Erich stand out from the crowd, even by today’s standards,” reads the inside
jacket flap, “was his personal integrity and unshakable character which helped him remain true
to his convictions while enduring merciless burdens, and the courage to be tough when his

convictions demanded it, even when it was inopportune and brought more than passing
disadvantages.”
During WWII, the Soviets places a hefty price on his head. Despite this, he made no attempts
to flee or evade aerial combat, but at the end of the war chose to enter captivity with his men.
Thus, it was that he spent 10 ½ years behind Russian Siberian barbed wire. Erich not only
survived captivity and forced labor but got through it physically healthy and psychologically
sound.
His life story published by Schiffer became a great success in Germany when it was initially
published in 1992. This volume was reprinted recently, and every page is just as brilliantly laid
out to reflect Erich’s life entire as the original book. “He was a man who wanted to become a
doctor, but whose fate it was it was to become and remain a soldier,” reads the final sentence
of the flap. So do the book’s 560 b/w photos.
In “German Fighter Ace: HANS-JOACHIM MARSEILLE”, gift recipient-buffs, or general war
readers, have another tribute to one of Germany’s top pilots of World War II available. His
exploits are legendary, 17 victories in one day, and 158 total victories, 151 of them in North
Africa, during 382 missions. All these aerial battles were achieved before Hans-Joaquin turned
23 years of age. Marseille was also one of the most highly decorated pilots in the Luftwaffe,
and was awarded the Diamonds to the Knights Cross, one of only 27 in all the war, as well as
the German Cross, and the coveted Italian Medaglia d’Oro. Also chronicled is the combat life of
JG 27, Marseille’s unit, including accounts of Marseille’s fellow pilots, Cream of the Crop Edu
Neumann, Werner Schroer, Gustav Rodel, and others.