German police found a WWII tank, an anti-aircraft gun, and a torpedo in a raid on a house belonging to an elderly man. The man’s property had been searched previously on suspicion that stolen Third Reich art was being stored there.

The entire contents of the heavy weapons trove, which had been hidden by its 78-year-old owner, were from the World War II era. The biggest pieces of equipment included a 45-ton Panzerkampfwagen V Panther tank, a FlaK 88 and a torpedo.

Police got a tip from prosecutors in Berlin, who had already searched the man’s home in the northern German town of Kiel a few weeks ago, following reports of stolen Third Reich art, the national newspaper Süddeutsche Zeitung reported.

The heavy weaponry proved rather difficult to remove from the house. It took local law enforcement several hours to get all of the equipment out of the home’s storage unit, according to media reports. A modern recovery tank had to be used to move the WWII Panther. 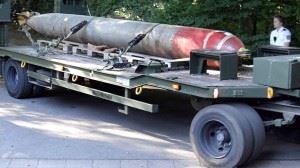 The confiscation of the arsenal turned into a public spectacle, with a large crowd gathering to watch.

The man could be sued for breaking German weapons laws, according to Kiel prosecutor Birgit Hess. However, the pensioner’s lawyer, Peter Gramsch, maintains that all of the equipment had been demilitarized and was registered accordingly.

The mayor of the nearby Keikendorf municipality, Alexander Orth, said it was no secret the elderly man had the tank in his possession. “He was chugging around in that thing during the snow catastrophe in 1978,” The Local quoted Orth as saying. The man has “a certain fondness for particular things … Some people like steam trains, others like tanks.”

There is currently a Facebookgroup to help the man get his Panther back: Gebt dem Mann sein Panzer (Panther) Zurück