At the corner of the streets of Dorpstraat and Beatrixstraat in the small town of Riel in the Netherlands, an unlikely statue has an unlikely home. The statue of a Wehrmacht soldier carrying a child tucked under each arm can be seen in the garden of a Dutch citizen who lived through the German occupation during World War II.

For 60 years, the Dutch citizens who knew the story of Karl-Heinz Rosch, the eighteen-year old German soldier who was killed during an British attack in October, 1944, kept silent. Memories of the German occupation were painful and it was easier to cling to their bitterness than to relinquish their hatred of the Krauts (“Moffen“) who brought death and devastation to their homeland.

Instead, the Dutch remembered that, on August 15, 1942, five men from the farming village of Goirle were tied to stakes and executed by the German as a reprisal for the sabotage of a railway track in Rotterdam on 7th of August, 1942. “As the perpetrators of the demolition attack in Rotterdam have proven to be too cowardly to turn themselves in, in spite of the urgent request of the Wehrmachtsbefehlhaber to do so, the following hostages have been seized and shot this morning.” Those executed were Robert Baelde, Willem Ruijs, Otto Ernst Gelder, Christoffel Bennekers and Baron Schimmelpenninck van der Oije.

War went on, and the hate of the Dutch people for the German occupiers only grew, it seemed unlikely that one of the hated Germans would ever redeem his nationality by doing something that would, in 2008, inspire Dutch citizens to raise money to cast a statue in his honor.

After the war, the Dutch, along with many others all across Europe who had cause to nurture their enmity against the Germans, chose instead to remember the sacrifices of their own people. In Goirle, the history museum preserved the stakes to which five men had been tied and shot by the Germans in 1942.

But two Dutch citizens (Toos Kilsdonk and Jan Kilsdonk), who had been children during the war, had another memory of a young German soldier who had left a very different legacy behind. Kanonier Karl-Heinz Rosch. Rosch belonged to the Muni-Staffel of the 14. Batterie/ Fallschirm-Ersatz- u. Ausbildungs-Regiment “Hermann Goering”, under the command of Oberwachtmeister Heinz Wustmann, after he was called up for service in July, 1944. Rosch celebrated his 18th birthday on October 3, 1944. 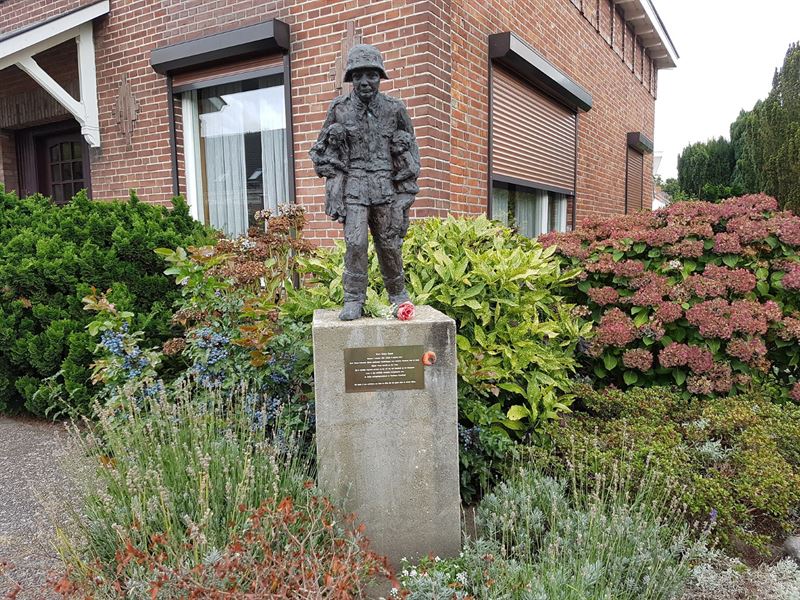 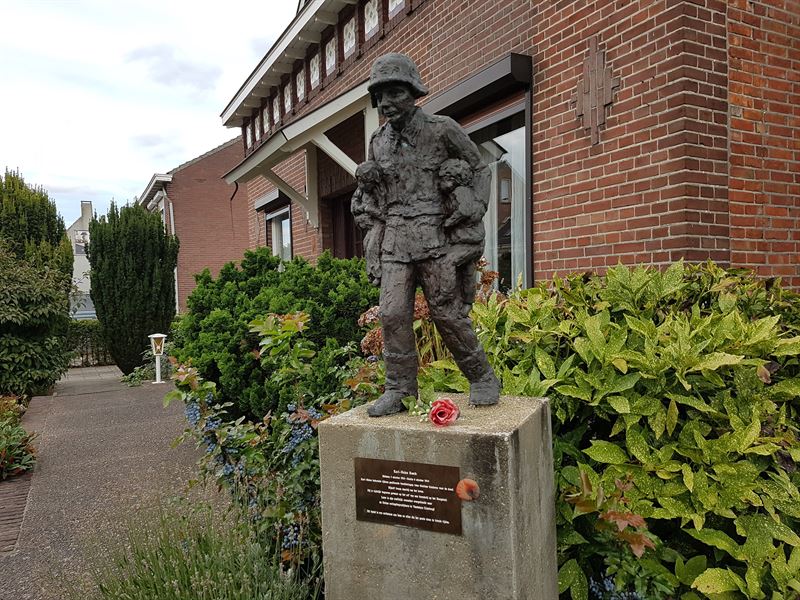 Just three days later, his echelon, which was stationed at a Goirle farm, came under artillery fire from British forces. Rosch, who was drinking a cup of coffee with mother Kilsdonk, likely heard the commands “Muni Vor!” making him ready to join his comrades, when he noticed the farmer’s two children, Jan and Toos Kilsdon, playing in their yard, oblivious to the danger drawing near.

Ignoring his own safety, Rosch grabbed the two young children, tucked one under each of his arms, and delivered them to the safety of the farmhouse’s basement.  As he raced off for the other side of the courtyard, he was struck by a grenade upon the very spot where the children had been playing moments before. Limbs were strewn everywhere as his body was torn apart by the force of the grenade. Witnesses who saw the grenade strike him remembered the dreadful sight.

But death was part of war and with so many dead, who had time to mourn the loss of a German? The war ended and people, Dutch and German alike, tried to rebuild their lives.

Karl-Heinz Rosch’s family lived in the former East Germany and was not free to come to the village to see the spot where their son died. But even after years went by and the young soldier’s father was able to visit the farm, the townspeople maintained their silence, not revealing that Karl-Heinz Rosch had died for the sake of two Dutch children.

For 60 years, the selfless act had passed without acknowledgment. “Because,” former city councilor Herman Van Rouwendaal realized, “he was just the enemy, just a damn Kraut.” But Van Rouwendaal, by now an old man, recognized that it was time to honor the sacrifice that the young man had made.

Van Rouwendaal appealed for donations to erect a statue as a memorial to Rosch. He was not the only one who thought the time had come to honor the memory of a decent man who gave his life for the sake of two children. Decades had passed and others felt that they were ready to abandon the black-and-white way of thinking which held that all the Dutch during the war were good and the Germans were all Nazis.

They understood that this was not a simple thing to do. Balance was needed so that the Dutch martyrs to the German occupation could also be recognized. The suggestion was made to honor the five men who were murdered by the Germans in 1942 by placing a monument next to the stakes which were preserved in the town’s history museum. The Rosch memorial could be placed nearby.  The two memorials would show that war was nuanced. There was brutality and there was humanity. In time, there was peace and, perhaps, forgiveness. The request was presented to the town council. 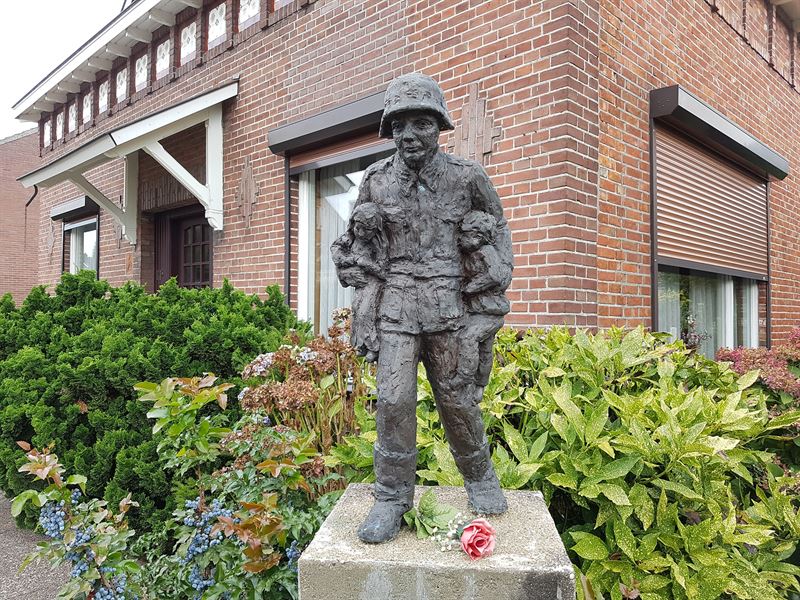 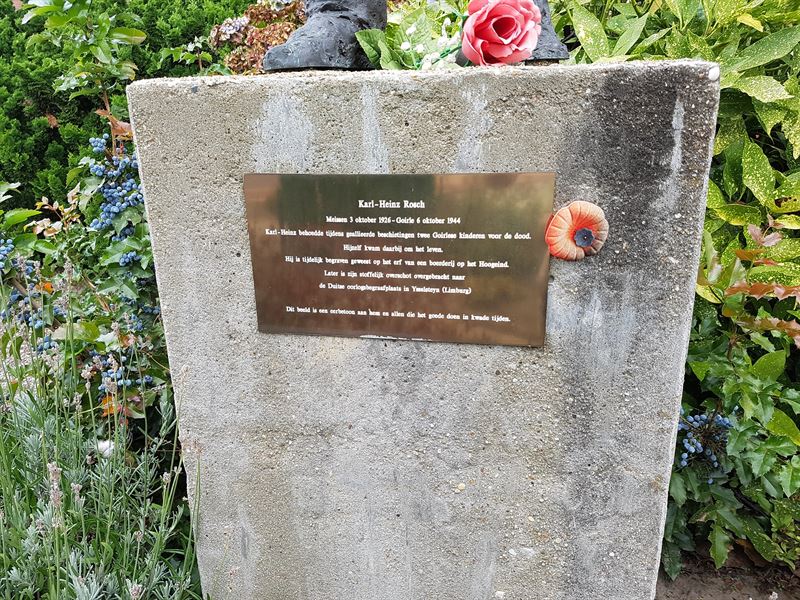 Van Rouwendaal expected opposition and he was accurate. The members of the town council debated the matter but decided that honoring a German soldier with a memorial was insensitive.  There was also fear that such a statue might run the risk of making the town a pilgrimage stop for neo-Nazis. Even though the intent was, as one member of the village put it, not to honor the Wehrmacht, “but rather the humanity of a young German soldier,” the request was denied.

The parents and grandparents of Rosch died. But then, Jan and Toos Kilsdon, children no longer, told their story of how a German soldier had saved their lives, losing his own in the process. Members of the Rosch family were told about the episode. The body of the young soldier was removed from its grave on the farm site and reburied in the German War Cemetery in Ysselsteyn.

Some people decided that it was time to come to terms with the past and they raised the funds so that the statue by Riet van der Louw could be cast in bronze. The statue, which could not be put on public display, would be placed in the garden of a local Dutch citizen, one of the last who saw young Karl-Heinz Rosch while he was still alive.

In all of Europe, and perhaps in all of the world, this is the only memorial erected to honor the memory of a German soldier who was part of an enemy occupying force. There’s only one other memorial erected for a German soldier by his former enemies, which is that of Friedrich Lengfeld, after US veterans collected funds to create a memorial for him, after he was Killed in Action whilst saving an American soldier during the Battle of Hürtgen Forest.

The last sentence of the plaque on Karl Heinz Rosch’s memorial reads: “This statue is a tribute to him and all who do good in evil times.”

7 thoughts on “The Hero of Goirle: The Untold Story of Karl-Heinz Rosch”