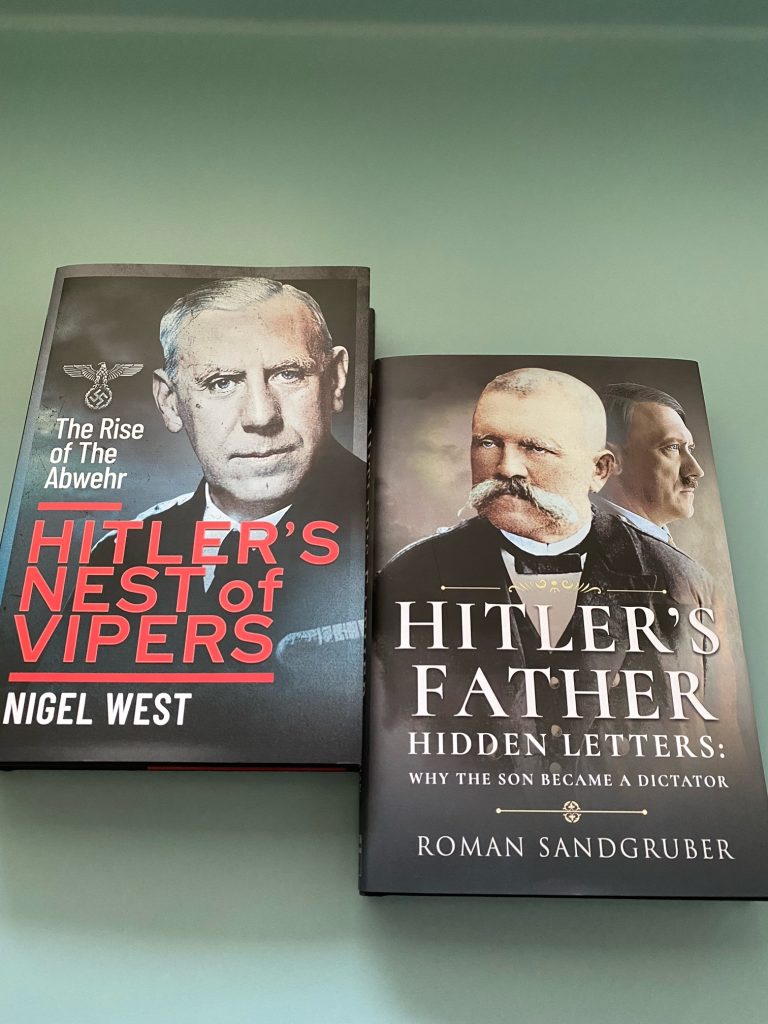 Hitler’s father was an Austrian customs officer. About his papa’s role as an educator, Hitler
wrote, “He laid down when the basis for a future that neither he nor I had understood at the
time faltered” As for his mother, during all of World War I, he carried a worn-out photograph of
her in his chest pouch, over his heart. It was his talisman for the years of struggle, and
apparently his most precious possession. Hitler said he cried twice in life, at his mother’s grave
and at the outbreak of the revolution when he was blinded and helpless. “This imposter, this . .
(expletive). . of the destruction of the work of the German front-line soldiers, without whom his
own life’s work would have been invalid,” cried Nazi Germany’s remnants.
The lead-in paragraph on the inside jacket flap sets the narrative tone and thesis of “HITLER’S
FATHER”, “The bundle of 31 letters, the pages of which had long wrinkled and yellowed with
age, had lain hidden in the attic for over a century until they were accidentally found. Only
when the razor-sharp script was examined further did historians discover just who had written
them – and that person, Alois, was Adolf Hitler’s father.”

The contents of the discovered letters have allowed the renowned historian-author Roman
Sandgruber to reassess the image that we have of Alois, offering the world a completely new
and authentic impression of the man. Via this father, psychologists, with us alongside, can
openly examine both lives. In addition, the letters shed further light onto the everyday life of
the Hitler family as a whole, a story which is generally characterized by myths, inventions, and
assumptions. Roman Sandgruber was gifted with the exceedingly rare opportunity to recount
the future tyrant’s childhood. The letters of Alois also help us amateur psychologists answer
one of the questions that is often asked: How could a child from an Upper Austrian province,
seemingly self-taught, but a blithering failure, rise to a position of such power?
The question that challenges to be answered, and one in which the letters offer no hint of an
answer, is this: How could a person who hated the sight of slaughter and blood continually
admonish Hermann Goring for “hunting innocent, helpless, endearing animals, finding them, to
enjoy slaughtering as a ‘sport’, then sign without reservation or qualification death warrants for
‘innocent, helpless, and endearing humans’, along with their children?” Of course, Carl Jung,
the Father of Analytical Psychology, Freud’s best and favorite student, took the first honest step
in attempting an answer to the complex question.
Certainly, a “HITLER’S FATHER” is a gift, not necessarily for under the Christmas tree since the
Fuhrer was without a God or a shred of mercy, but certainly for the New Year. As one of the
very important books of the past decade, it is yet another ‘must’ for your recipient’s growing
library.
In “Hitler’s Nest of Vipers – The Rise of The Abwehr”, author Nigel West, the critically-
acclaimed author-researcher on enemy and Allied special intelligence has given serious WWII
readers the best-ever compiled and written reference on the Abwehr, Hitler’s military
intelligence service, and its SS equivalent the SD Sicherheitscdienst. However, newly
declassified M15, CIA, and Counterintelligence Corps files shed a very different light on the
structure, control, and capabilities of the German intelligence machine in Europe, South
America, the Mediterranean and the Middle East. Virtually no trained spies from our side ever
penetrated Hitler’s secret service, or, for that matter, even knew where it was headquartered.
One Abwehr aspect the Allies didn’t know anything about deals with Admiral Canaris, the
Chief of the Abwehr. We believed his attentions were focused more on trying to subvert Hitler.
Therefore, he was on our side. Yet, West, in terms of his diligent research, reveals that the
admiral expanded his initial 150 personnel into a vast world-wide organization which achieved
most notable successes against us Allies.
This is a critically superior source of information about Hitler’s military intelligence service.
Especially intriguing is the Abwehr’s little-known-about rise to power, 1935 to 1943; its
activities across the globe revealing the true scale of the German intelligence collection
networks; how specifically it was directed from the individual semi-independent military

districts within the Third Reich; the sabotage organizations in neutral countries, including
Switzerland and Spain, plus a host of other activities too numerous to mention here.
In short, for the first time, readers, especially enthusiasts of WWII, are privy to some of the
darkest secrets of Hitler’s much-needed world-wide intelligence gathering efforts. Now,
revealed for the first time, with photos of their key Abwehr players introduced, are priceless.
Any person who knows about Admiral Canaris, and receives this book about him and his ultra-
secret intelligence unit as a gift, will relish it as incredible, must-have, gift for his or her library.