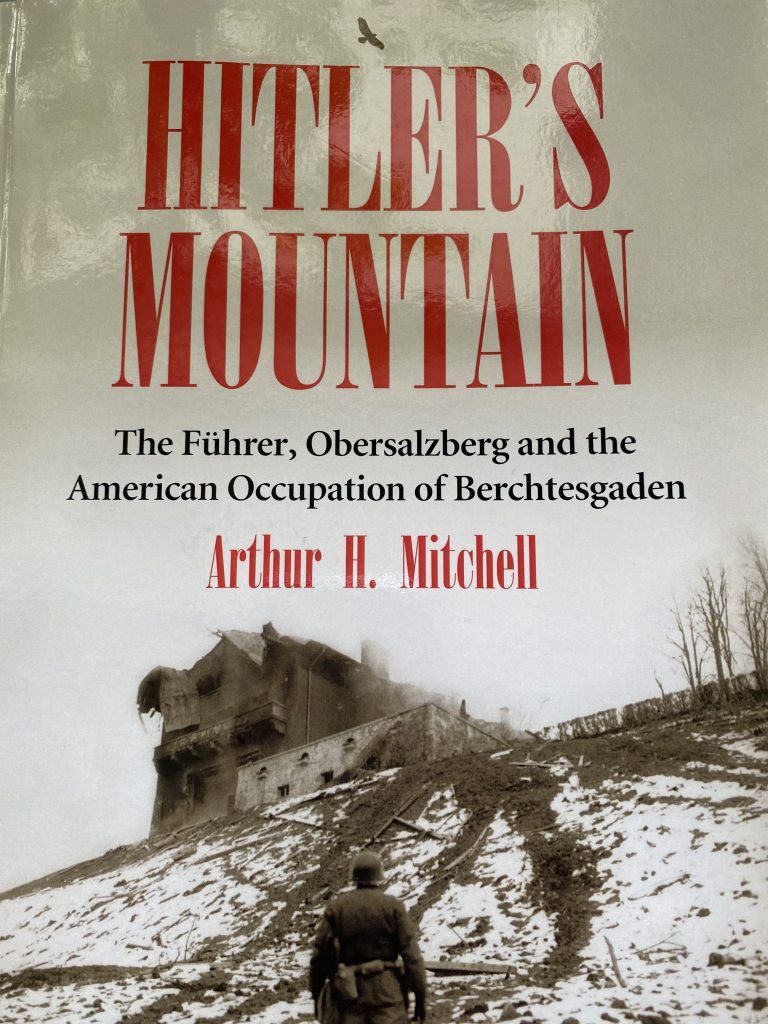 Being there . . . to intermingle with Adolf Hitler, his mistress Eva Braun, and their coterie of
social sycophants, bootlicking militarists, and Gestapo goons in the balmy, often unrealistic
climate at the “Eagle’s Nest”, the Fuhrer’s Obersalzberg Mountain retreat, three miles from
Berchtesgaden in the Bavarian Alps . . . .
Hitler was a mountain man, writes author Arthur H. Mitchell, not in the sense he liked to climb
the heights of Germany, or trek through her mountain paths. But he did find in the towering
terrain above the temporal flatlands and rolling hills a place of severe detachment to absolve
then ameliorate his inner demons while reinforcing his outspoken, clearly apparent convictions.
At the peak of Hitler’s power in the late 1930s, historian Arnold Toynbee noted that in the case
of the Anschluss with Austria the Fuhrer demonstrated an “uncanny manipulation . . . from his
wizard’s cave at Berchtesgaden.”
Reviewed and Highly Recommended by Don DeNevi
“HITLER’S MOUNTAIN – – The Fuhrer, Obersalzberg and the American Occupation of
Berchtesgaden”, by Arthur H. Mitchell. McFarland & Company, Inc., Publishers: first published
in 2007, republished 2010; 214 pages, sc, $24.99. See: www.mcfarlandpub.com.
Hitler’s love of the Eagle’s Nest, the Obersalzberg, and the Berchtesgaden lasted to the end of
his life at the age of 56 – – and, adds author Mitchell, “… beyond”. Simply put, he was a
legendary god among the German people. They respected him even more for his love of
Bavaria and the Obersalzberg.
Of course, Berchtesgaden had a special significance for the Fuhrer. A mere 30 miles to the north
lay the small town of Braunau where he was born, the son of a minor customs official who died
when young Adolf was 13. His mother was devout and quiet, a timid woman who dedicated
herself and her boy to the Holy Virgin. From such early “protective” loving, and sincere
dedication to the Catholic faith evolved one of the most sinister, evil men civilization has yet
produced. Many argue that when the pale young man, frail and morose, moved with his
parents to Passau, then later to Munich at the age of 18 where he live in a homeless shelter
after frittering away his generous inheritance, he began listening to the right-wing politicians of
Germany, and the rampant anti-Semitic ideas circulating the nation which sooner or later would
lead him straight into the core of hell.
After an inimitable “Introduction: Der Mann und der Berg” (The Man and the Mountain),
Mitchell takes us on a most unusual, one and only, journey into an unpleasant past, revealing
insipid facts about wartime events long cloaked in mystery. Five parts, Vagabond to Fuhrer,
Berghof, Festung, Occupation, and, After 1945 to 2005, bring together for the first time in the
literature of the Second World War the political events that took place in Obersalzberg from
the 1920s until the U.S. Army returned control of the area to the German government in 1995.
Concentrating primarily on the years during which Hitler was in residence, author Arthur

discusses the geography, history, and climate of Berchtesgaden as well as Hitler’s original
acquaintance with the Bavarian Alps.
In 2006, when this masterwork was first published, Mitchell wrote, “My range is wide here. In a
wider scope, the work focuses on the symbolism of identity and public perception as it relates
to the place, setting, and lifestyle of political figures . . . but my focus always comes back to the
evil genius who was supported by the bulk of his German people to the bitter end. The man and
the mountain had become one and, 60 years later (now 77 years) later, they remain so”.
Lest we forget, in the category of who was the most murderous, the greatest monster of the
20 th century, Adolf Hitler won hands down, with Joe Stalin a close second. But again, lest we
forget, it was the Americans, and their British and French Allies, including, yes, the Russians,
too, who destroyed the evil Nazi murder machine and drove its Fuhrer to shoot his brains out.
“Hitler’s Mountain” is a must read for anyone interested in the background of Adolf Hitler’s
character and personality, shaped partly by geography, terrain, and the Bavarian Mountains – – –
one Alp in particular.