Hitler’s rise to power in 1933 was fueled largely by the chaos and economic depression that plagued Germany after World War One. The onerous Versailles treaty combined with the worldwide depression resulted in mass unemployment, high inflation and a stagnant economy. Acquiring even basic necessities was often challenging. After enough Germans became dissatisfied with other political parties who found it impossible to rectify this situation, voters turned to the Nazis. President Hindenburg believed he would be better able to control Hitler by making him Chancellor, a severe miscalculation. As soon as Hitler gained power he did not relinquish it, and proceeded to dismantle Germany’s democracy and the protections it provided. 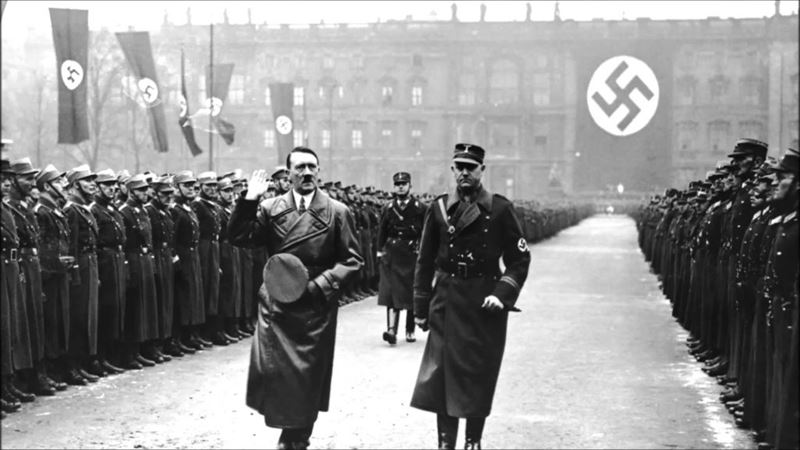 Although it’s likely Hitler would have been far too radical in times of peace and prosperity, this extremeness is exactly what ordinary people felt drawn to after 15 years of a humiliating peace treaty that left their country in shambles. Hitler and was also a master at exploiting the fears and anxieties so prevalent in the country by 1933. This unfortunate situation explains how millions of decent people could elect a psychopath that murdered over 8 million people.

Hitler started his political work soon after WWI when he was discharged from the Army as a Corporal. At this time there were illegal groups of Army officers who worked to overthrow the Weimar Republic and undermine the Versailles Treaty. (The Weimar Republic is the name of the German government that emerged after WWI). Hitler worked as a spy for these groups, and information he provided led to the execution of prominent Communists and Socialists. In 1919 he joined a political organization called the German Labor Party, which soon attracted several hundred Army officers. Over the next decade Hitler grew this small group– eventually renamed the National Socialist German Workers Party– into the most powerful political force in Germany.

From the beginning, Hitler sought to gain the support of powerful factions in the army, industry and finance. He did this by fighting communism and criticizing the harsh terms of the Versailles treaty, especially the reparations Germany was required to pay and limitations placed on the Army. He simultaneously cultivated a populist movement of millions of ordinary Germans ravaged by high inflation and unemployment. He promised to return Germany to full employment, and relief from big businesses and trusts, which made life difficult for small business owners tradesmen, and workers. Once in power he broke these promises.

He also sought to unite people from all economic classes with his right wing nationalistic ideas that blamed Germany’s woes on Communists, Jews, the Versailles treaty and the impotent Weimar Republic. He promised to defeat these evil forces and make Germany a great power again. This was a powerful pitch to many who believed that Germany was robbed of victory in WWI by weak internal forces that sued for peace, and in turn meant that years of suffering and hundreds of thousands deaths were all in vain.

In this respect, Hitler was a master showman. Evidence makes it clear he cared little for the plight of Germany’s poor and middle classes. He said, “The workers, they want nothing but bread and games. In the great mass they are not worth consideration. We must build a master class from elements of a better race.” He also referred to the German masses as a “flock of sheep and blockheads,” and a “mixture of stupidity and cowardice.” He thought of them only as forces to manipulate to help him gain power. This manipulation centered on undermining the Weimar Republic whenever possible. The Nazi party’s paramilitary groups routinely attacked Jews and opposition leaders and had large street brawls with Socialist, Communist and Republican paramilitary groups.

The Nazis paired this chaos with a highly sophisticated propaganda machine that unleashed relentless attacks on their political opponents and the institutions of the Weimar Republic. These attacks were not based on fact, but on how to convince the masses they were traitors and threats to the German state. Hitler wrote in Mein Kampf that, “By shrewd and constant application of propaganda, heaven can be presented to the people as hell and, vice versa, the wretchedest existence as a paradise.”

The person responsible for creating these realities was Joseph Goebbels, Hitler’s propaganda director. Goebbels explained that, “Propaganda should not be decent–it should be effective,” and “We fight with Marxist methods, but we shall do things better than the Marxists.” The ultimate goal was to convince enough people that Hitler was the only one who represented their economic interests, and that the only way order could be restored was if a strong Nazi party took power.

Progress toward this goal was slow. By 1928, after almost a decade of political organizing, the Nazi strategy captured only 12 seats in the Reichstag, the German legislative body. This would change with the word economic crisis that struck in 1929, which left 7 million Germans unemployed. Soon the Nazi message become a lot more appealing, resulting in 107 seats and 6 million votes in the 1930 election.

Although Hitler was clearly popular, he was still not in power. Some suggested he be brought into the government, which Hitler refused. He wanted to lead the government, but made clear he wanted to obtain that power through an election. Hitler shrewdly saw how weak Chancellor Heinrich Bruening was– the depression forced social services to be cut and taxes raised– and knew if he waited his electoral success would likely be even larger the next election.

In 1932 Hitler ran against von Hindenburg, who was seeking his third term as President. Hindenburg was re-elected with 19 million votes, but Hitler still scored his largest electoral total with 13 million votes. In the Reichstag election of the same year the Nazis become the largest political party with 229 seats. In the following months successive rulers found it impossible to form a stable coalition. Twice during this time von Hindenburg denied Hitler’s request to be made Chancellor, a request he finally acceded to in January 1933. Hitler agreed to von Hindenburg’s demands he follow the constitution and rule with the consent of the Reichstag. Von Hindenburg was therefore happy when Hitler wanted to call new Reichstag elections to seek the approval of voters. Unfortunately he failed to see how much of a threat these elections posed to the Republic’s future.

Since Hitler now controlled the government, the Nazi propaganda machine became even more powerful than in previous elections. Opposition parties were terrorized and the electorate bombarded daily of the danger of electing anyone but Nazis. This advantage was cemented a week before the election when the Nazis blamed communist terrorists for setting fire to the Reichstag building. Many apparently believed them, as the Nazis won 43 percent of the votes, their highest vote total ever. Later investigations showed it was probably the Nazis who set the fire.

Hitler wasted no time in establishing his autocracy after the resounding election success. He arrested all Communist Reichstag members and many Social Democrats who then could not attend the Reichstag session. The Nazi members easily passed bills providing the government absolute authority. Those from opposition parties who were not arrested were intimidated by Nazi paramilitary forces, whose presence was a permanent feature of the new Reichstag session.

This sham democracy did not last long. Hitler soon banned the opposition parties, destroyed trade unions, abolished the opposition press, and replaced all government and civil service workers with Nazi party members. Opposition party members were arrested and sent to concentration camps, while Hitler issued many anti-Jewish decrees that stripped them of civil rights, property, and the ability to hold certain professions.

Hitler’s final move to acquire absolute authority was to purge potentially disloyal Nazi party members. They were unhappy that Hitler seemed to be favoring the army over Nazi paramilitary groups, and that he did not follow through on his economic promises. With these rivals disposed, no person would again challenge Hitler for power.

The final piece of Hitler’s rise to power was the death of President von Hindenburg in August 1934. Hitler announced a plebiscite to ratify his wish to assume the powers of Chancellor and President. He received overwhelming support, and from then on would be known as the Fuehrer, or leader.