Sometimes blue-eyed and almost always of an Asian appearance, these German Army soldiers became a myth wrapped in the occultist/esoteric legend of the “Nazi mysteries”…

Paolo A. Dossena was born in 1968 and has always lived and worked between Southern Switzerland and Northern Italy. Here, he describes how the childhood discovery of a Turkistan Division shield in a wood on this border foreshadowed the future publication of his work Hitler’s Turkistani Soldiers.

As a child walking in the mountains around Groppallo (Piacenza, Italy), I heard a lot of stories regarding ‘the Mongols’ (as the servicemen of the Turkistan Division were known because of their Asian appearance). One day, I discovered Maurizio Cavalloni’s Foto Croce archive (Piacenza) which hosts a number of individual portraits as well as collective pictures of the Turkistan Division members. They didn’t look the devils described by the “Nazi Mysteries”; their appearance didn’t seem ‘demoniac’.

All those occultist legends proclaiming that Hitler wanted ‘a return to the sources’ in Central Asia (advocating the conquest of Turkestan, Pamir, Gobi and Tibet in order to secure Germany’s access to hidden diabolical centres of power in the East) were just charming legends.

The Turkistan Division men had been conscripted into the Red Army; had been captured on the Eastern Front by the Germans; and had endured starvation and cannibalism under arrest, before volunteering for service with the Turkistan Division. These men were completely unrelated to the occultist/esoteric beliefs (the “Nazi Mysteries”) followed by some top Nazi leaders such as Heinrich Himmler and Alfred Rosenberg. Those few Pan-Turkish activists, who were prime movers in organising Turkman military units in German uniform, were not interested in occultism either. (Pan-Turkism is something different from Kemalism – namely the Turkish-Anatolian secular and Jacobin Nationalis (the former being the political movement aiming at the political union of all Turkic-speaking populations.))

Accordingly, I decided to write this book, which covers the political background (Pan-Turkism) of the founders of this unit in German service; debunks some historical myths surrounding it (the “Nazi Mysteries”); and describes its political and miliary history.

Both the Germans and the Allies thought that the Turkistan Division was ‘of poor quality – more inclined to surrender or desert at first opportunity than to fight for Germany.’ Everybody despised the Turkmen. This is why the division was withdrawn from the frontline and sent to fight the partisans between Slovenia (Gotschee) and Northern Italy.

The most crucial event in the history of the 162. (Turkistan) Infanterie-Division is the‘Great winter mopping up’ (November 1944 – January 1945). This operation took place in Northern Italy, in the mountains of Pavia, Piacenza, Genoa and Parma. It consisted in the clearing of Partisan independent republics which had been set up there. It was the greatest German anti-Partisan action in Western Europe and one of the greatest anti-Partisan operations of the Second World War.

I undertook a massive field investigation to determine what had happened in the mountains, where part of the Turkmen (not all of them) abused many local women. The Germans shot all the offenders. The village of Groppallo (Piacenza) was chosen for my case study. Many Groppallo witnesses who I interviewed shared this opinion about the correctness of the German soldiers.

The Turkistan men understood their pending fate after one of their soldiers returned from Russian captivity. The Azeri Turk from the Caucasus was captured on the Italian front by an American unit and was subsequently handed over to the Soviets. However, he was able to escape from the Soviet Union, to make his way to Italy and to rejoin the Turkistan Division. In Southern Italy (Taranto) there were Allied concentration camps; the deportation journeys from Taranto to Odessa (USSR) have been described by many historians. The story the Azeri Turk told convinced the Turkmen that the Western Allies could not be trusted, which explains their fanatical stand at Padua (their last battle), that had been typically restricted to elite units such as Waffen-SS and paratroopers. 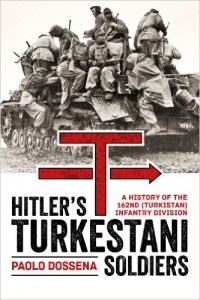 Paolo A. Dossena, firstly worked as a manual labourer and as a seasonal lumberjack in the mountains. However, after taking a degree in history (1997), he started working as a journalist (international politics), translator (English, Italian, Rumantsch, fourth official language of the Swiss Federation) and English teacher.

He is currently translating the second updated Italian edition of his book The Scientist and the Shaman (Lo scienziato e lo sciamano, Lindau, 2011) into English.

Contains 400 pages approx 260 photos and 2 maps. You can buy Hitler’s Turkistani Soldiers: A History of the 162nd (Turkistan) Infantry Division on Amazon (UK) and Amazon (US).