Argunners Magazine published a series of amazing WWII photographs recently uncovered from the archives of General Charles Day Palmer, who was a four-star General. Most of the photographs were confidential photographs taken by the U.S. Signal Corps not fit for publication, Brig. Gen. was allowed to have them for private use after censoring (names of places etc.). Although the first part was more general photographs of WWII. This second part depicts the true horrors of world war 2. The final part ends with more photographs on the liberation and “war necessary destruction” as General Palmer remarked on one of the photographs.

Charles Day Palmer was born in Chicago, Illinois on February 20, 1902. After graduating from Washington High School in Washington, D.C., he entered the United States Military Academy, where he graduated in 1924. During World War II, he worked in the British West Indies to establish military bases and ran projects on anti-submarine warfare. In 1944, he became the Chief-of-Staff of the 2nd Armored Division, nicknamed “Hell on Wheels”, participating in the Invasion of Normandy, a breakout from Saint-Lo and the crossing of the Siegfried Line. In October, he was transferred as Chief-of-Staff to the VI Corps, where he received a battlefield promotion to Brigadier-General.

After World War II, Palmer took part in the Korean War. During his career, he received various valor and service awards such as the Distinguished Service Medal, Legion of Merit, and the Bronze and Silver Star. He passed away on June 7, 1999, in Washington, D.C. The photographs were shared by his grandson, Daniel Palmer, honoring the memories and service of his grandfather. 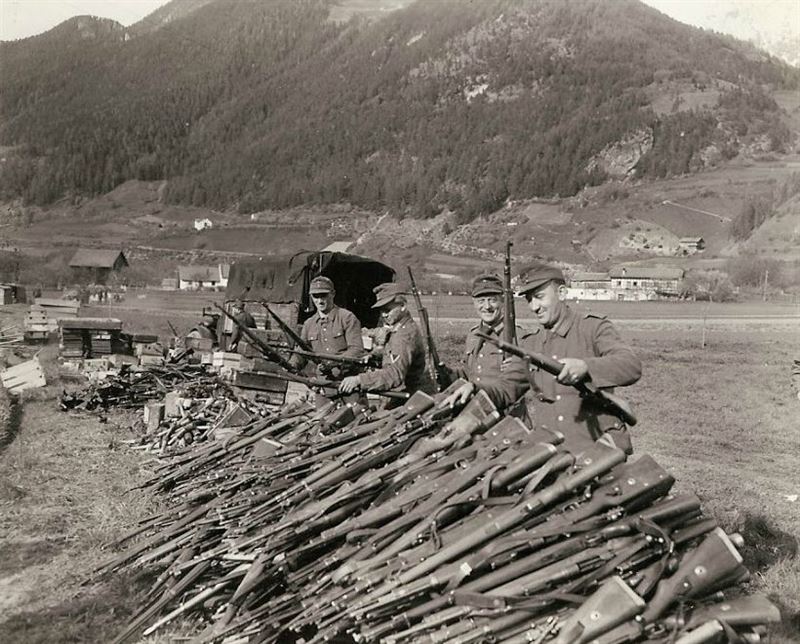 “End of the Line,” General Palmer remarked. The surrender of the 19th Army. The end! With the final capitulation of Germany to the Allies, German soldiers who have bor arms for over five years against almost all of Europe and the U.S., surrender their rifles to their American conquerors near Landeck, Austria. They seem happy that it is all over. Hand grenades and other equipment can be seen piled up beyond the rifles. (#P22) 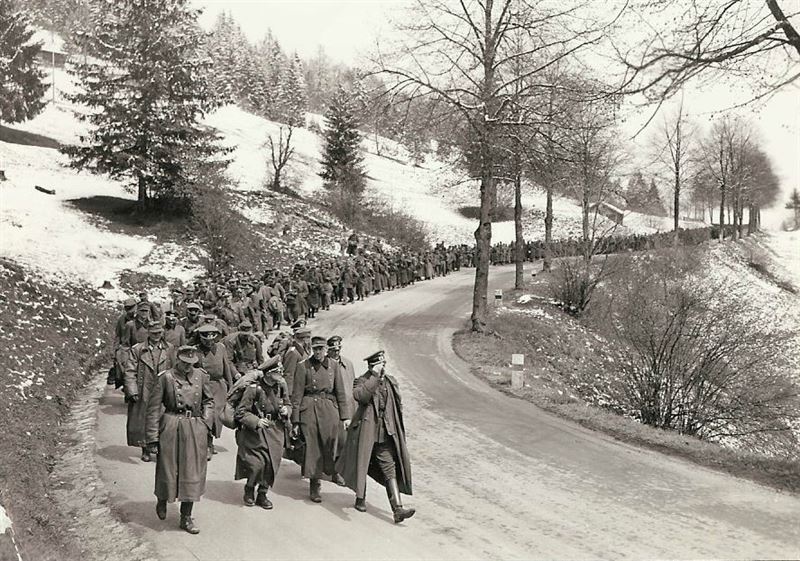 One thousand German officers and men taken in the redoubt mountains are showed being marched back over to the mountain road that they once defended. The road leads to an important Austrian town. Although these officers and men gave up without much resistance, other German troops offered fanatical resistance at key towns along the way. (#P24) 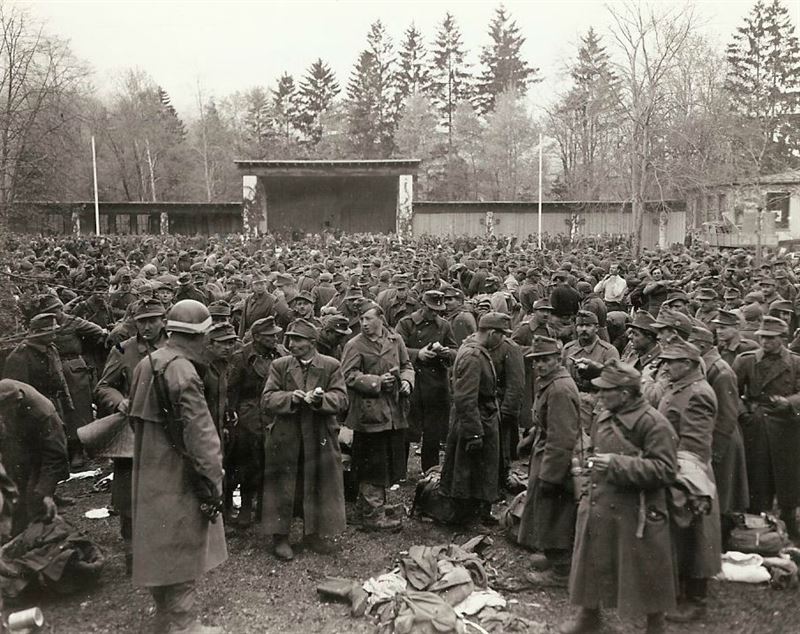 Hungarian surrender: Great mass of Hungarian troops who surrendered to Seventh Army are rounded up in Garmisch-Partenkirchen, scene of the last winter Olympics held before the war. Troops were claimed by their leader to have been used as service or labor troops. (#P38) 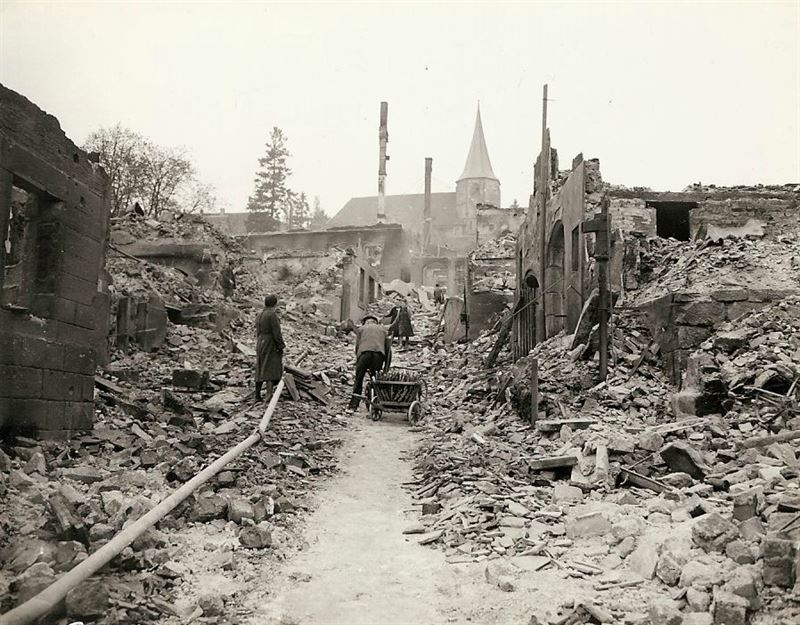 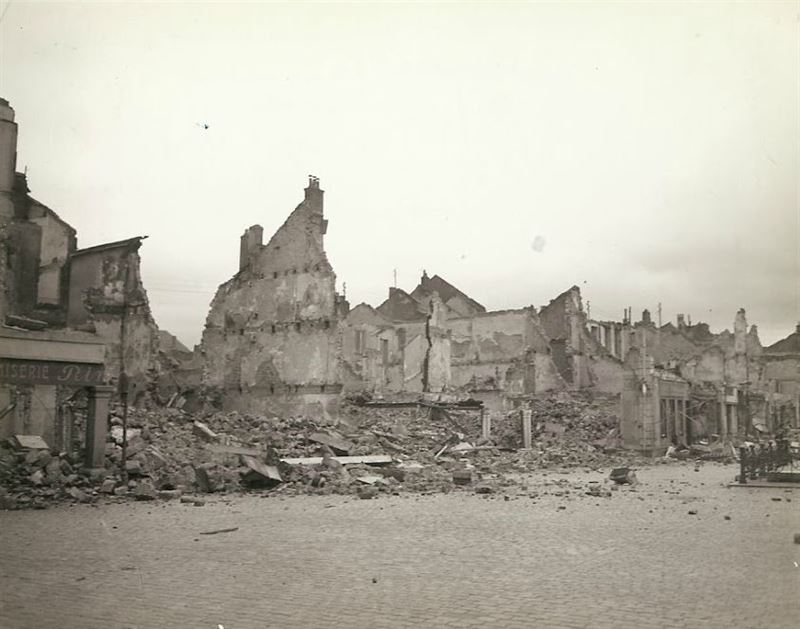 Wrecked and burned buildings in France. The buildings were mined and burned by the Germans. “Remains of a friendly little town, that was ‘scorched'”, Gen. Palmer wrote on the backside. (#P23) 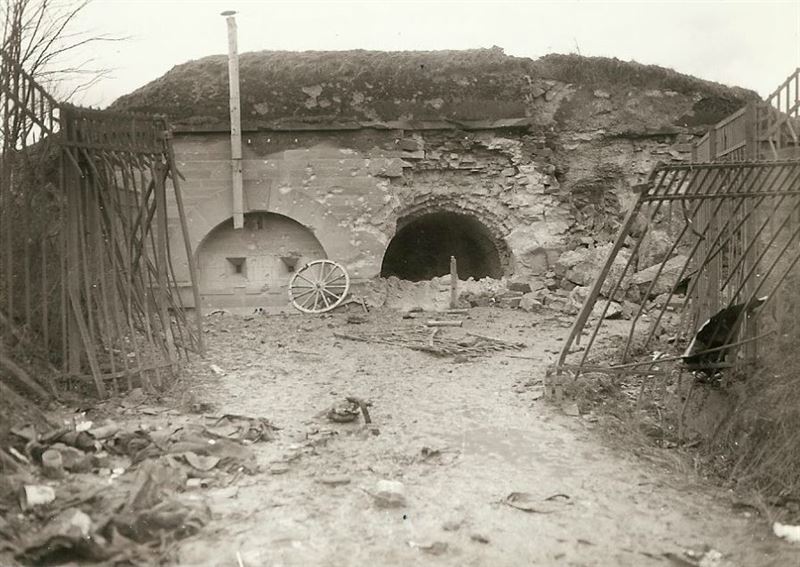 A pillbox located just on the outskirts of a Fort, it shows damage, probably caused by American tank fire during the battle to take the stronghold. (#P25) 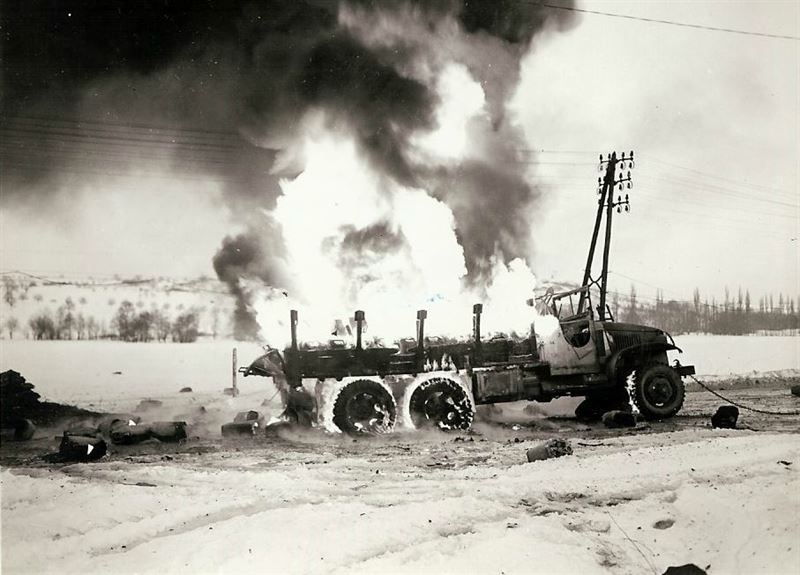 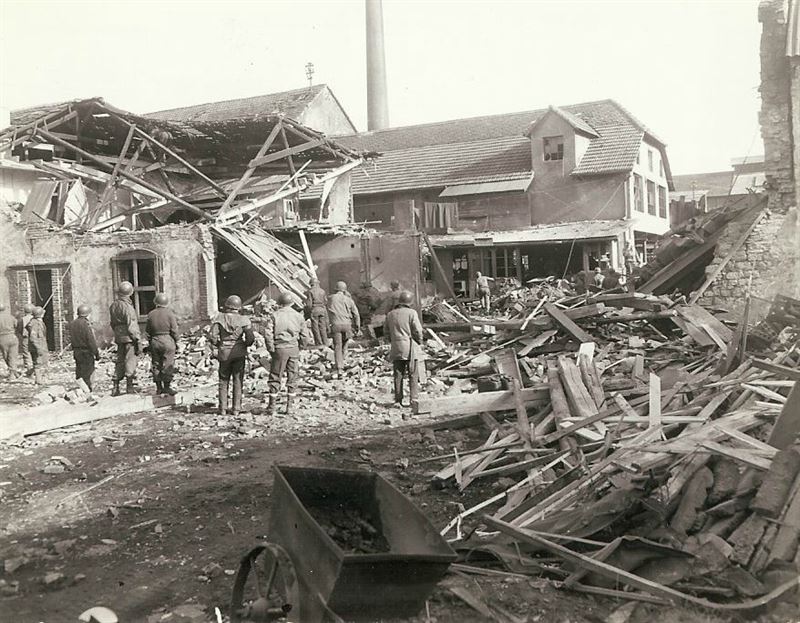 The damage was done, when a German 280mm shell landed in the area around 0345 hours. General Palmer wrote: “Shell from Railway did this. Not far from where I live. 5 bigger ones hit about 150 yards from my place the others .. (?). One blew the door in on my caravan. The place was a mess. Nice guys!” (#P30)

At 1300 hours, after three days of battle, this town was finally retaken. Yanks surrounded the Germans after losing the town during the initial German counter-attack. The patrol is about to enter the church to examine the belfry and cellar where snipers are still believed to be hiding. American prisoners were held here.  (#P33)

NEW CAPTION: Capt Eugene A. Sisson, CO, E/274, followed by his radio operator, enters the church where over 250 American POWs were held captive in the cellar since AM of 4 Jan. 1945. 7 JAN 45. Winger-sur-Moder, France.

Horrors of War: A pile of dead German soldiers, France, frozen due to the cold weather. (#P34) 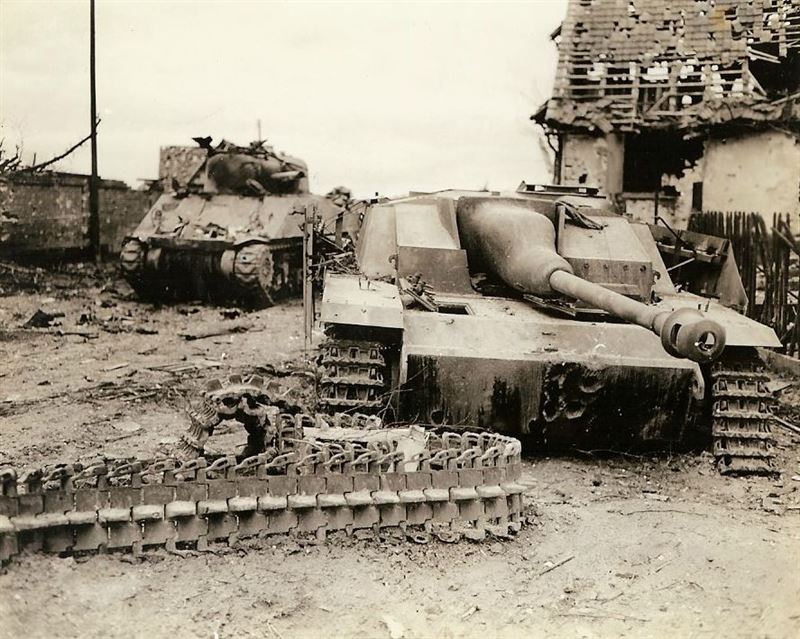 Knocked out American M-4 tank and German Sturmgeschütz IV sit side by side in the street. Note: Hits on the German Stug. (#P35) 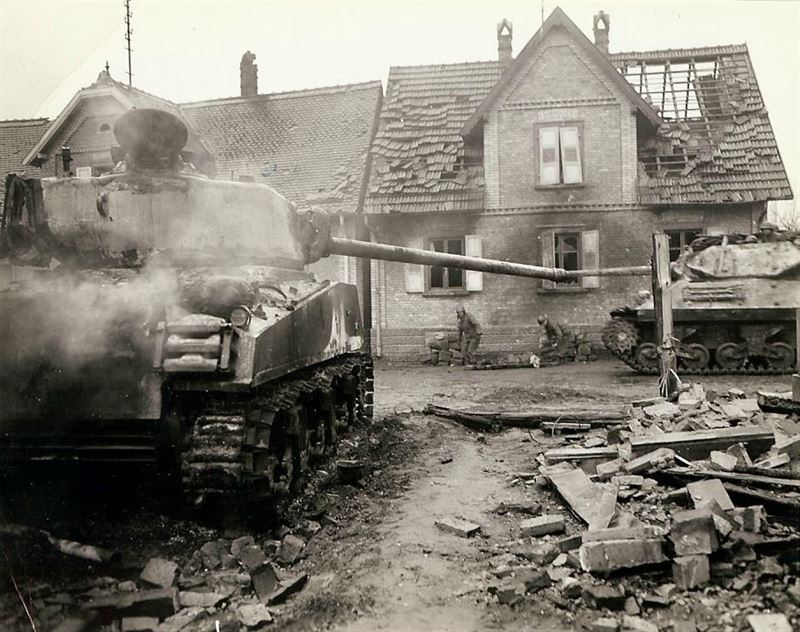 A tank destroyer moving past an American tank that was knocked out during the hot battle when the Americans retook the town. Between the two armored vehicles, two medical men are picking up an American soldier that was killed in the fight to take the town. (#P36)

Horrors of War: Troops string wire past 4 dead German artillery horses which were killed along with 5 German soldiers when an American artillery burst caught them as the horses were being hitched on Dec 14th. Another German soldier was wounded. (#P37)