S.C. Gwynne’s study of the final year of the American Civil War illustrates the escalating brutality of the conflict as the Union sought to subdue the Confederacy by striking directly at the will of its population. 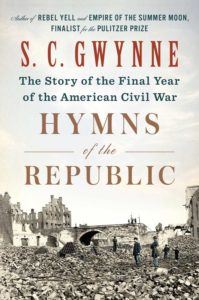 Hymns of the Republic is an engrossing examination of the evolution of Union strategy during the Civil War, focusing on a variety of participants from well-known leader such Ulysses S. Grant and William T. Sherman to private citizens like Clara Barton who sought to relieve the suffering wrought by the conflict. Author S.C. Gwynne brings an immediacy to his retelling of familiar events that makes the story seem new. He reveals the humanity behind famous figures in American history, allowing readers to understand the motivation behind the decisions to wage a “hard war” against the Confederacy. The book devotes a significant amount of attention to the struggle between the Army of the Potomac and the Army of Northern Virginia, but also addresses Sherman’s taking of Atlanta and subsequent March to the Sea as well as Phil Sheridan’s operations in the Shenandoah Valley. Gwynne contrasts the battle of attrition waged between the antagonists’ main armies with the Union’s supporting operations focused on confiscating or destroying crops and livestock, thereby attacking Southern morale, with an attendant effect on Confederate soldiers’ will to fight.

By far the most fascinating character study in the book is Gwynne’s portrait of John Singleton Mosby, the Gray Ghost of the Confederacy. Gwynne traces the development of Mosby’s 43rd Virginia Cavalry Battalion from the seed of an idea planted by Mosby while serving under the Confederate cavalry general J.E.B. Stuart to its maturation as a guerrilla force operating at first almost in the shadows of Washington, and subsequently in the Shenandoah against Sheridan. Mosby envisioned a partisan force that had no fixed base or lines of communication, but rather operated continually among the enemy, using surprise and shock as combat multipliers against numerically superior forces, while subsisting and equipping itself from captured stores and supplies. Gwynne demonstrates that while Union commanders at first considered Mosby merely a nuisance, over time they reconsidered their opinion as more and more manpower was required to defend supposedly secure rear areas from Mosby and his raiders. Ultimately Union commanders resorted to executing those of Mosby’s men whom they captured, causing the Confederate commander to respond in kind, illustrating in microcosm the hardening of attitudes as the war progressed.

This book is available at Simon & Schuster, and from a variety of retailers such as Amazon US (Pre-Order).