The Avro Lancaster is a British four-engined Second World War heavy bomber designed and built by Avro for the Royal Air Force (RAF).

It first saw active service with RAF Bomber Command in 1942 and, as the strategic bombing offensive over Europe gathered momentum, it became the main heavy bomber used by the RAF, the RCAF, and squadrons from other Commonwealth and European countries serving within the RAF, overshadowing its close contemporaries the Handley Page Halifax and Short Stirling. The “Lanc”, as it was affectionately known, thus became one of the more famous and most successful of the Second World War night bombers, “delivering 608,612 long tons of bombs in 156,000 sorties.” 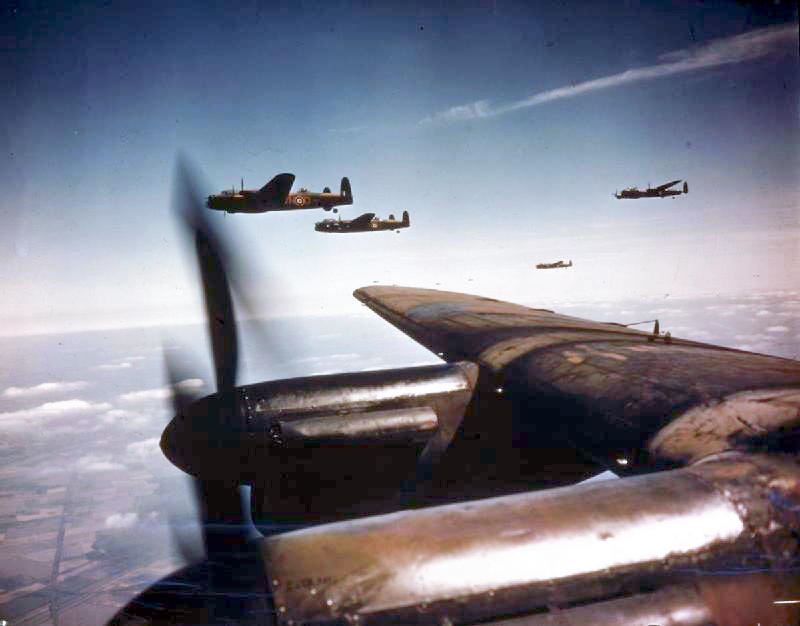 Lancaster B Mark Is of No 50 Squadron, Royal Air Force, based at Skellingthorpe, flying in spread formation. The two aircraft beyond the wing tip are ‘VN-D’ and ‘VN-J’ the former, serial number JA899, was missing on the night of 24 – 25 June 1944 with Pilot Officer L G Peters and crew.

A Royal Air Force Avro Lancaster I (s/n NG128, coded “SR-B”) of No. 101 Sqn out of Ludford Magna and flown by Fg Off R.B. Tibbs as part of a thousand-bomber raid, dropping its load over Duisburg, Germany, on 14-15 October 1944. Note the large aerials on top of the Lancaster´s fuselage, indicating that the aricraft is carrying ‘Airborne Cigar’ (ABC), a jamming device which disrupted enemy radio telephone channels. Over 2,000 sorties were dispatched to the city of Duisburg during 14-15 October 1944, in order to to demonstrate the RAF Bomber Command’s overwhelming superiority in German skies (“Operation Hurricane”).

An Avro Lancaster B Mark I or III of No. 514 Squadron RAF based at Waterbeach, Cambridgeshire, releases its bombs through cloud, during a daylight attack on a flying-bomb launch site at Les Catelliers in northern France, (“Noball” Operation).

Avro Lancaster B I PA474 (Battle of Britain Memorial Flight)

The ‘Phantom of the Ruhr’ Lancaster of RAF Coningsby’s Battle of Britain Memorial Flight (BBMF) returns from an air-test early in the 2012 season. (Credits: SAC Graham Taylor/MOD) 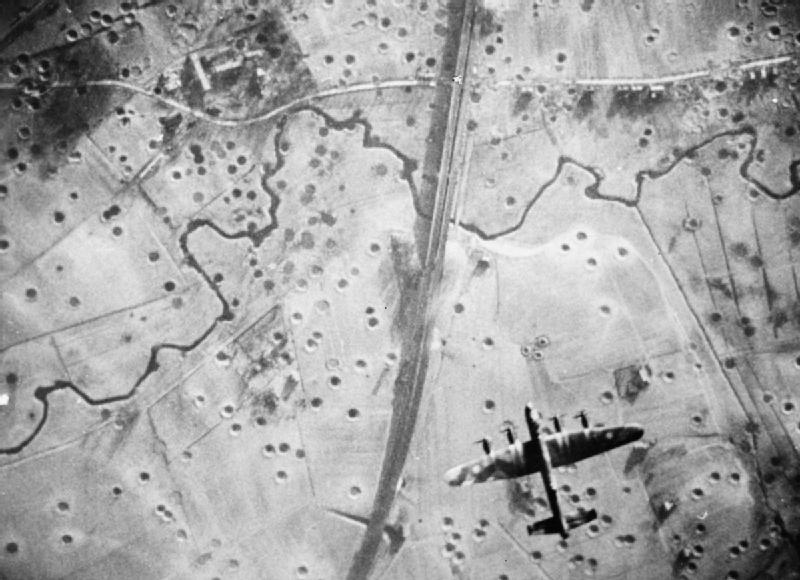 Still from film taken by the RAF Film Production Unit, showing an Avro Lancaster of No. 617 Squadron RAF flying over the target during a daylight raid on the railway viaduct at Schildesche, Bielefeld, Germany. Smoke can be seen rising from a near miss. 18 aircraft of the Squadron bombed the viaduct with 5,450 kg (12,000 lb) “Tallboy” deep-penetration bombs and several direct hits were claimed, but subsequent photographic-reconnaissance evidence showed the viaduct to be still intact. The viaduct was attacked repeatedly but only collapsed after using 10,000 kg (22,000 lb) “Grand Slam” bombs on 14 March 1945. 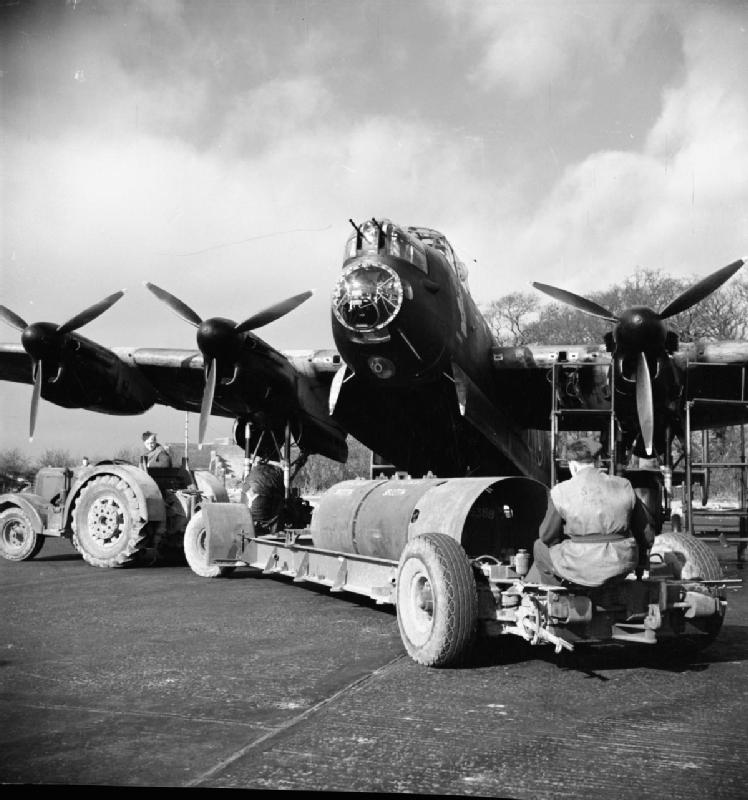 An 8,000-lb HC bomb (‘super cookie’) is brought by tractor to a waiting Avro Lancaster of No. 106 Squadron RAF in its dispersal atSyerston, Nottinghamshire. The target on this particular night was Stuttgart, Germany. 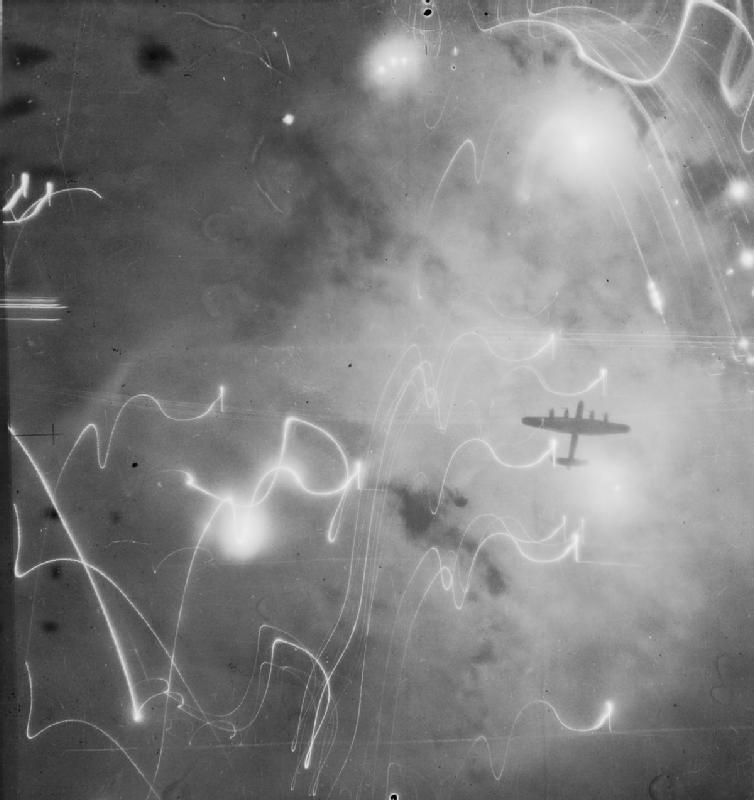 An Avro Lancaster of No. 1 Group, Bomber Command, silhouetted against flares, smoke and explosions during the attack on Hamburg, Germany, by aircraft of Nos. 1, 5 and 8 Groups on the night of 30/31 January 1943. This raid was the first occasion on which H2S centimetric radar was used by the Pathfinder aircraft to navigate the force to the target. The pilot of the photographing aircraft (Lancaster ‘ZN-Y’ of No. 106 Squadron, based at Syerston) was Flt Lt D J Shannon who, as a member of No. 617 Squadron, took part in Operation CHASTISE (the “Dams Raid”) during the following May. 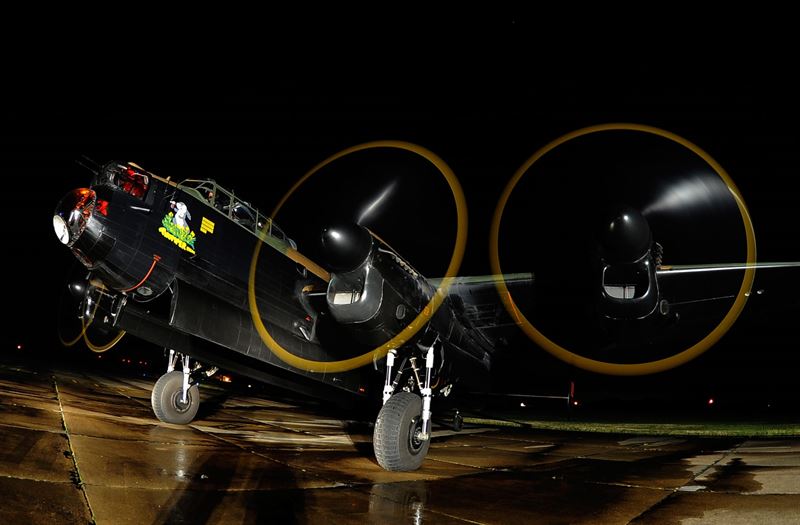 The Royal Air Force Memorial Flight’s Lancaster PA 474 undertakes a night engine run in preparation for the 2013 commemoration of the 70th anniversary of the Dambusters raids of World War 2. Painted with the nose art of 617 squadron’s Thumper Mk III, this aircraft, the only flying example of its type in Europe and will retrace the training missions flown by 617 Squadron crews over the Derwent Dam in May 2013. (Credits: Sgt Mobbs/MOD) 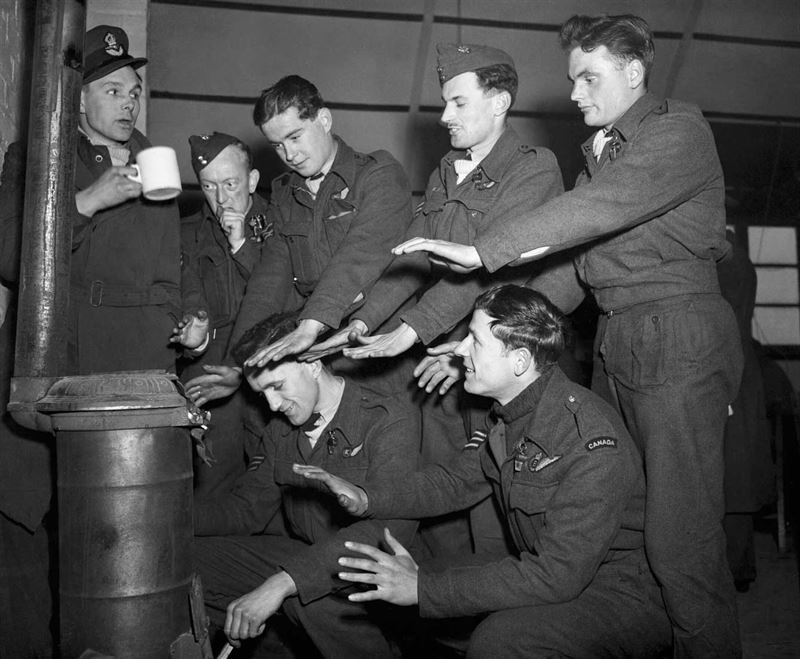 The crew of Lancaster “C for Charlie” of No 44 Squadron try to warm themselves in their Nissen hut quarters at Dunholme Lodge, after returning from a raid on Stuttgart, 2 March 1944. 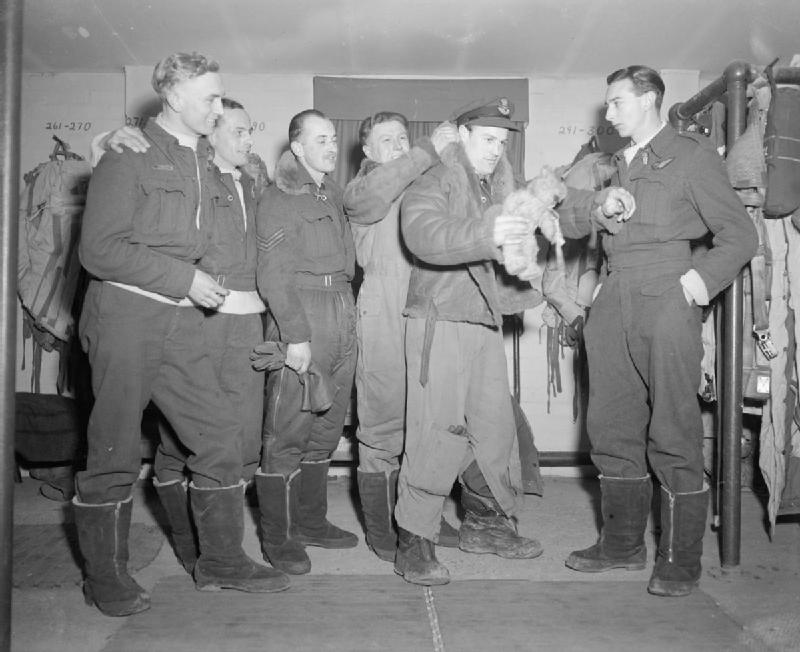 The crew of Avro Lancaster B Mark III, ED831 ‘WS-H’, of No 9 Squadron RAF, captained by Squadron Leader A M Hobbs RNZAF, boarding their aircraft at Bardney, Lincolnshire, for a raid on the Zeppelin works at Friedrichshafen, on the shores of Lake Constance (Bodensee), Germany. This special raid introduced novel tactics devised by No. 5 Group, among which was the ‘shuttle’ technique. After bombing the target, the Lancasters flew to Blida in North Africa, where they were refuelled and rearmed, returning to the United Kingdom two nights later and attacking La Spezia, Italy, en route. Six days later, Hobbs and his crew were shot down and killed in ED831, while returning from a raid on Gelsenkirchen, Germany. 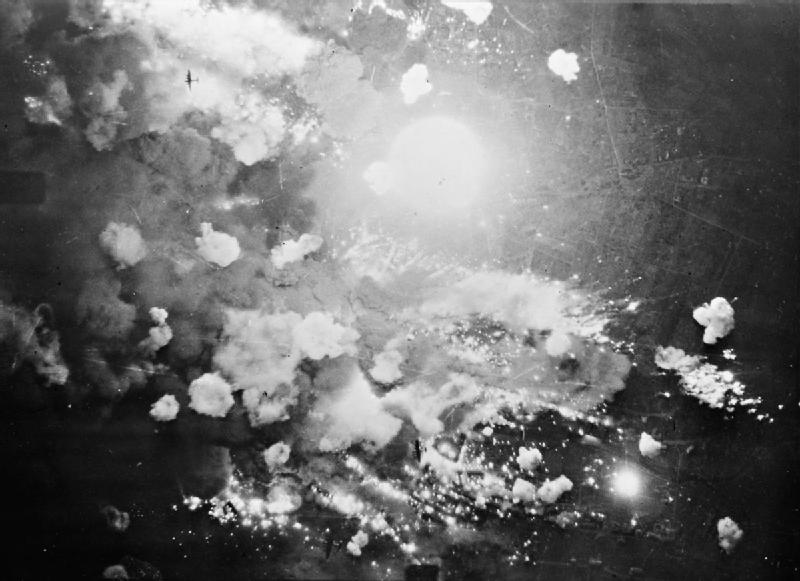 Vertical aerial photograph taken over Pforzheim, Germany, during the first and only area-bombing raid on the city. High explosive and incendiary bombs explode in the target area at the height of the attack. Three Avro Lancasters can be made out; one at upper left and two more at bottom centre, as they overfly the target. 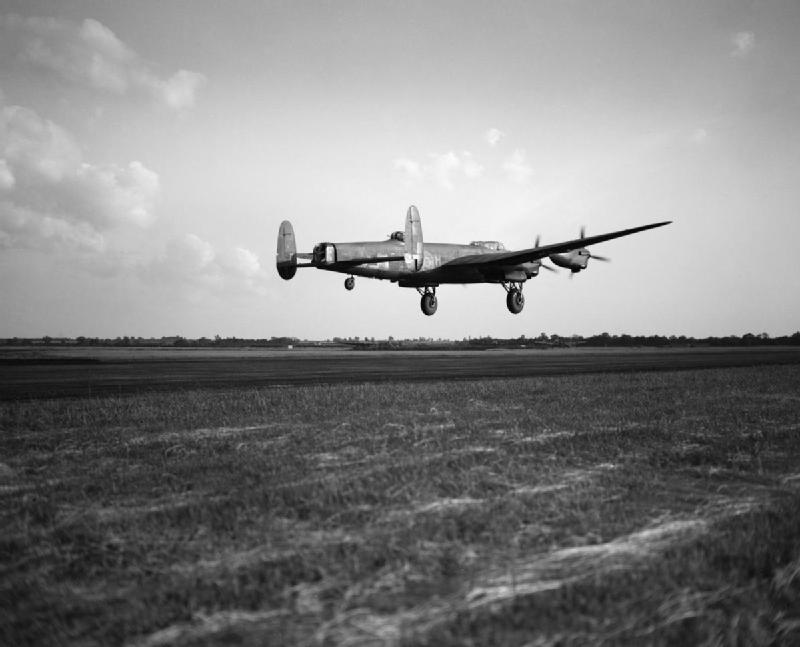 Avro Lancaster B Mark III, ED831 ‘WS-H’, of No 9 Squadron RAF, flown by Squadron Leader A M Hobbs RNZAF and his crew, taking off at Bardney, Lincolnshire, for a raid on the Zeppelin works at Friedrichshafen, on the shores of Lake Constance (Bodensee), Germany.

WAAF and other ground crew members wave off Pilot Officer W H Eager RCAF and his crew in Avro Lancaster B Mark I, W4236 ‘QR-K’, of No. 61 Squadron RAF, as they begin their take-off run from Syerston, Nottinghamshire, for a night raid on Hamburg, Germany. This was W4236’s 74th mission, from which it returned safely: it was lost, however, during a raid on Mannheim on 10 August 1943. 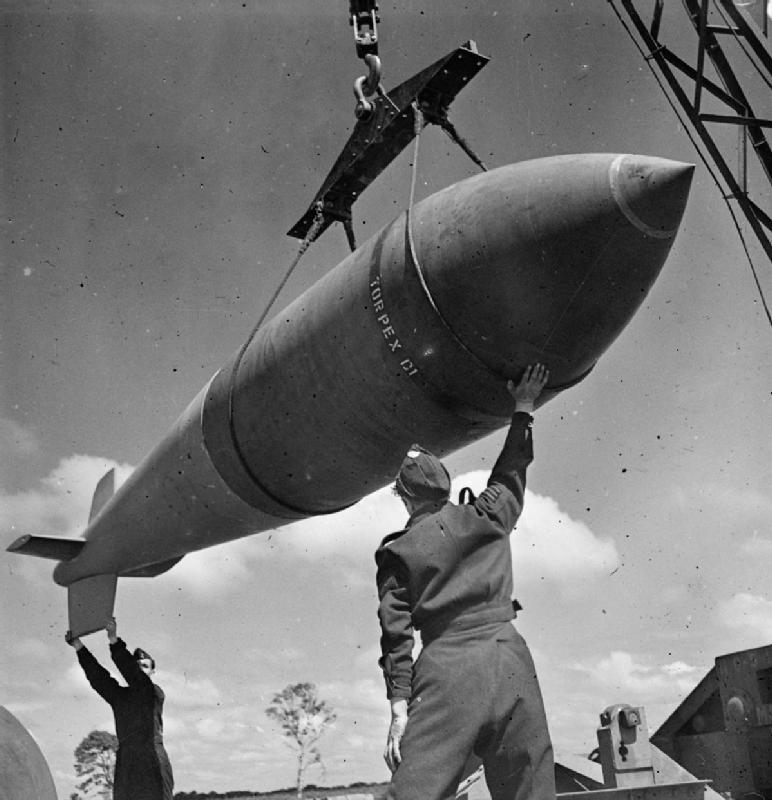 A 12,000-lb MC deep-penetration bomb (Bomber Command executive codeword ‘Tallboy’) is hoisted from the bomb dump to its carrier at Woodhall Spa, Lincolnshire, to be loaded into an Avro Lancaster of No. 617 Squadron RAF for a raid on the V-weapon site at Wizernes, France. 617 Squadron were unable to bomb the target on this occasion because of low cloud cover, but were to succeed two days later. 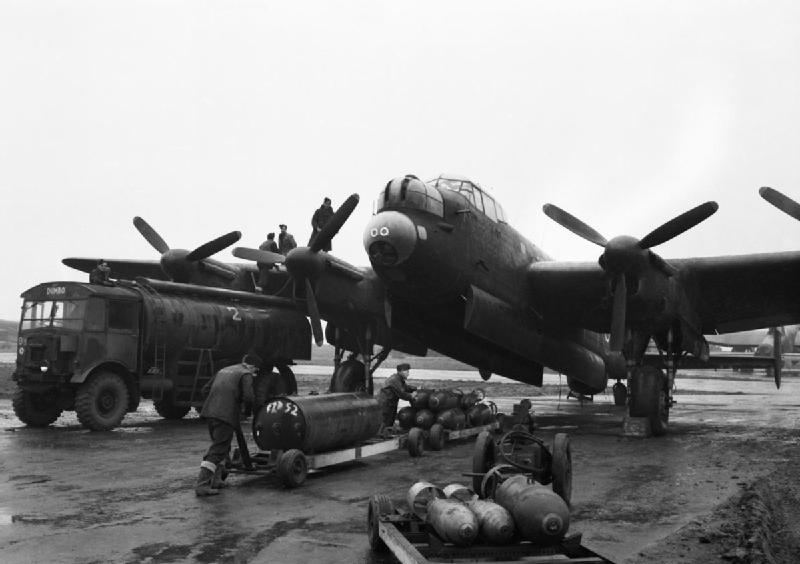 Ground crews refuelling and bombing up an Avro Lancaster of No. 75 (New Zealand) Squadron RAF at Mepal, Cambridgeshire, for a night raid on Krefeld, Germany. The bomb load consists of a 4,000-lb HC ‘cookie’ and mixed 1,000-lb and 500-lb MC bombs. 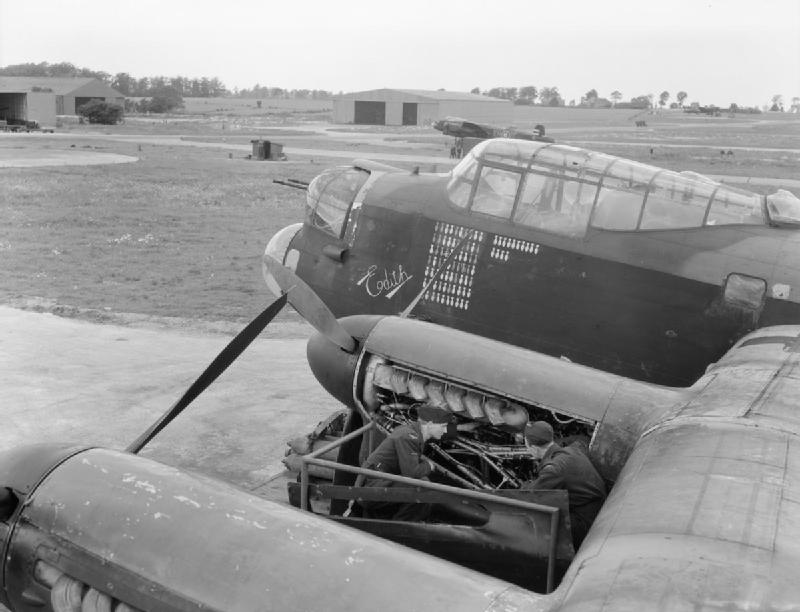 Mechanics at work on an engine of Avro Lancaster B Mark III, LM577 ‘HA-Q’ “Edith”, of No. 218 Squadron RAF on a pan hardstanding at Chedburgh, Suffolk.

King George VI and Queen Elizabeth visited three Pathfinder stations on 10 February 1944. Here they are seen talking to ground crew of No 156 Squadron at Warboys, Huntingdonshire, beneath the imposing bulk of one of the squadron’s Lancasters protruding from a T2 hangar.

The visit of HM King George VI to No 617 Squadron (The Dambusters), Royal Air Force, Scampton, Lincolnshire, 27 May 1943 – The King inspects ground crewmen lined up beneath the nose of Avro Lancaster B Mark I, ED989, DX-F, ‘Frederick III’, which bears a motif derived from a caricature of Wing Commander Campbell Hopcroft, the Commanding Officer of No 57 Squadron which shared Scampton with No 617 Squadron at this time.

1 thought on “In RAF Bomber History: Avro Lancaster in 20 Photographs”